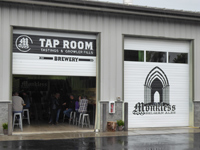 I'm OLD but new to loving GOOD beer. Monkless is one of many breweries in central Oregon (Bend) and I have enjoyed each of their Belgians. Excellent

this is fun little spot, apparently they have a full blown restaurant and taproom coming to downtown soon, but for now its a very humble space, two adjacent garage areas, one for brewing and the other for a taproom. its just a little makeshift walk up bar inside, where they really havent put a lot of resources into the aesthetic, a working brewery sort of feel, kegs all over the place and the like. they have a few tables inside but the garage door opens up to some more outside in the parking lot, real no frills sort of place that is all about the beer, and somewhat of a destination from downtown. its unclear of this spot will remain open when the new one kicks in, but its cool for now. they have a nice range of beers on tap from wit to quad and most styles in between. i admire a place like this that picks a theme and a style set and stick to it, less and less of that in the states these days where even the classic first and second wave brewers find themselves chasing the trends. i thought all of the beer was good, some of it excellent, including a wit with oranges and a quad with cherries. my one criticism is that they seem to be using the same yeast for all the beers, and so they all have a real commonality to them. where this might be flatting in say a trappist brewery where the yeast is a house flavor unique to that place, its unflattering here because its just a generic belgian culture to me, more or less available at every home brew shop in the country. that said, they are using it well, so i cant be too harsh, but mixing in some other belgian strains or developing a more distinct blend would be an obvious next step for them. some cans, some sexy corked bottles, labels look sharp. awesome service too, the dude was majorly cool to us, excited about the liquid, and pretty well informed. i think they have a real good thing going, a super mellow space thats all about the beer, and some solid beers in styles we dont see very often well done from american brewers. im a fan, and cant wait to check out their new spot next time in bend!