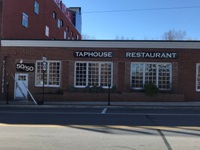 3.94/5  rDev -1.5%
vibe: 4 | quality: 4 | service: 3.75 | selection: 4 | food: 4
Went here on a Thursday evening with my wife and kid. Wasn't completely empty, but plenty of seating available. Sort of a warehouse vibe with plenty of tables up front, a long bar in back, some bar games to the side, and a stage that wasn't being used. Nice classic rock playing in the background. Friendly, efficient-enough service. Pretty solid tap list, no whalezbro, but 50 handles with lots of regional brews and national seasonals. I got a salad that was delicious. My wife's burger and fries looked good too. I guess they've got 50 burgers on the menu of that's your thing. Nothing amazing, but a lot better than the initial reviews indicate. Maybe they've got the kinks worked out now? I was just passing through, but if I lived close by, I'd definitely hit this up pretty often.
Mar 25, 2016
More User Ratings:
Rated: 4.09 by gabe71tx from Virginia

For starters, the taphouse has roughly 50 different beers on tap, including several on nitro and then a selection of ciders. Variety was pretty good, with a nice selection of styles and regions represented. They also had a pretty decent bottle selection as well, that even included a bottle of Harydwood Gingerbread stout. So the beer selection is pretty good here, and is clearly the strong suit of 5050.

One of the primary reason I was interested in visiting 5050, is that I saw on line that they still had this year's Nugget Nectar on tap. So that's what I ordered, right off the bat, and it's where things started to take a nosedive. The NN was clearly off, either from having been on the gas too long, or because the taplines hadn't been cleaned in a while (the more likely reason I'm sorry to say). Maybe I didn't give the staff enough credit, but they didn't strike me as the sort of folks who would have cared one way or the other, so I didn't bring it up. Also, when I asked about trying a taste of the BA Hardywood coffee stout they had on tap, I was informed that unfortunately it was one of the beers they were not allowed to let customers sample before purchasing it. I was told however, that they do have a premium sampler you can purchase, which allows you to purchase four 3-4 ounce sample glasses of anything on the menu for $21. Granted, prices are a bit on the high side anyway here (my pint of NN was $6.50), but that didn't sound like a deal I wanted to indulge in. Otherwise, our server didn't seem to have a lot to say, though he was prompt enough on a late Friday afternoon (the place wasn't particularly crowded, but there was a doorman up front, so I assume they get a bigger crowd later on). We had just eaten a few hours ago at Pave Mint, so we didn't try the food.

In terms of vibe and atmosphere, again it's difficult to rate. This is a sizeable place, looking very much like a converted old warehouse. There's a split level area next to the bar area (where we were seated), which had a pool table and several shuffleboard sets There was also a foosball table. The front area is a fair size dining room area, with I thought a considerable number of tables (maybe 20 or so). The vibe is very informal and low key, and I think there were several flat screen TV sets as well. The bar area had around 15 or 16 stools I think, and is straight back from the front door on Cork Street. It's all OK, but for some reason it just struck me as bit cold and stark (in terms of a vibe).

Given the number of tap handles and decent bottle selection, I can see coming back again here again I suppose. On the other hand, depending on how prevalent the "freshness" issue is here, I might think twice before ordering a pale ale or IPA here (or see if I might be allowed to sample it first). Not sure this is a place I'd want to go out of my way to visit, but if I happened to be in the area, I can see stopping by to see what's on offer.

Rated by Irishman_Scott from Pennsylvania

Reviewed by VeganUndead from Virginia

Rated by rmank from South Carolina

Reviewed by bufante from Iowa

Reviewed by Iamjeff6 from Virginia