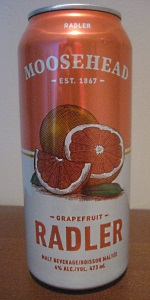 Notes:
View: Beers
Reviews: 2 | Ratings: 7 | Log in to view all ratings and sort
Reviews by biboergosum:

473ml can - conveniently sold as singles, rather than a typical case. Also, according to the label, there is more grape juice than grapefruit juice in this thing. WTF?

This beer pours a hazy, pale golden yellow colour, with a teeming tower of puffy, finely foamy, and mildly bubbly off-white head, which leaves some decent splotchy lace around the glass as it slowly evaporates.

It smells of American bottled grapefruit juice (so, sugared), grainy and crackery cereal malt, lemonade, and not much else. The taste is bready and grainy pale malt, some mixed domestic citrus fruitiness, simple syrup, a touch of lager yeast, and some ethereal floral, musty, and straw-like (hop?) bitterness.

The carbonation is quite active in its palate-coating frothiness, the body a so-so medium weight, and mostly smooth, but for a fruity clamminess evolving as things warm up a tad around here. It finishes off-dry, the frooty essences basically spent.

Overall - this one starts off with a bang, but ends with a whimper. The grapefruit & friends character fades fast, until what we're left with is a very boring old lager (or 'beer', as the ingredient list so helpfully reads). Refreshing enough, I suppose, but there are better citrus Radlers out there to be had.

very nice simple to enjoy when cold or maybe warm and have more then one but too much don't want to get DUI when driving. well the ABV is little higher then other Radler's I have had in the past.

NightINgale, May 09, 2019
Moosehead Grapefruit Radler from Moosehead Breweries Ltd.
Beer rating: 3.5 out of 5 with 7 ratings