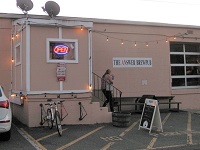 Notes: The entrance to this brewpub is in the rear off of the parking area. Don't park in front because you'll just have that much farther to walk to the back door.
BEER STATS

Finally found my way through the doors of The Answer! Love the artwork vibe throughout, with that Super Mario centerpiece fitting perfectly in the Retro arcade game-loving folks at the Answer. Draft list was superb; I got a little of everything I’d been wanting to try from them. Can’t personally speak for the food, but will rate based on the rave reviews I’ve gotten from friends and family in the past. Definitely a spot I can’t wait to go back to!

Wasn’t really a late night last night; it was just at the end to a long day so the night takes the blame (day was all like, ‘shit was good when I left, I don’t know what to tell you, man’). As such, this new morning became early afternoon. Just. Like. That. The Uber ride out rolling through residential neighborhoods was unnerving, but we arrived on the front side, and hiked around to the backside because that’s where the Answer be, and we found there to be a decent crowd. I know why my vacationing ass is here on a Thursday at 1pm, but don’t the rest of you folks work? Seriously…

Looooong straight bowling alley lane wood varnished bar with a knobby uneven cut tree trim, plank base, & wood foot box. Seating for upwards of a dozen and a half on squared wood stools. Barback holds a long row of 36 numbered non-descript handles; these are the guest taps. Glassware shelved horizontally above and vertically to both sides. A trio of scrolling boards atop listing guest taps (brewery, beer, style, origin, ABV, & pricing). A trio of 4 tap towers on the end; their own beer is being poured from elsewhere. ‘FrozAns’ (read: slushie machine) behind the bar next to the Nightingale ice cream sandwich freezer of love. Events calendar & Untapped leaders boards above; growlers and guest dead soldier bottles displayed.

Light blue walls, a laminate looking floor over concrete, & a white ceiling with a boxed wood trim. Baby track spots and the pillars wrapped with strung holiday whites. Vibrant colorful art riddled about. 2 dozen tables in rows about the room and a stage for play on the end.

And down past the bar now to back there (me, pointing). Rear space holds a few games (pinball, and a 4 player Ms. Pac Man, as if you had 3 friends, loser). Through the seating area; upwards of a dozen tables, to a small 8 seat wood ‘L’ shaped bar to the rear. 20 pool ball handled row pouring the house beers (so now I knows where they be). Some bar counter space off the bar separating here from the seating. And the brewery to the rear of the rear (which is technically the front); the tanks each named for a Star Wars character.

They have 10 house beers up. Plus… 2 ‘Andalls’ (randallized Impy Stouts, described on their website as “thick/fudgy/syrupy/flavorful stouts”), 9 ‘Jooses’ (someone else’s Berliners & Goses with fruit juice/puree randallized), and 3 ‘FrozAns’ (“slushy versions of your favorite Joose!”). For. Fuck’s. Sake. Lest we not forget the 3 dozen+ guest taps. Nearly 1/3 of them are fun imports (Fruh Kolsch, Schneider Aventinus Eisbock, Mahr’s Brau Helles, BFM Abbaye de St Bon-Chien), and a half dozen of the remaining craft options are state of Virginia offerings.

I did a sampler of 4 house beers on the sane side avoiding the Andalls, Joose, & FrozAns for $12 (Caught a Humble, Kettle; Sour with pink salt & plum puree. 4.2%, plummy as plum does; Boomerang Potential, Session IPA, 5.1%, citrus, pleasant; Corporate Headquarters, Impy IPA, 8%, murky, dank, tropical fruit; Property Theft, Nitro Brown Ale with coffee & toasted coconut, 6%, medium bodied, dry, nice roast), and then had a Captain Lawrence Rosso E Marrone and a Fruh Kolsch, which scored a high yum factor. I let the unusual suspects drink the Jooses while I looked on.

We hung at the bar a while, true. Lots of Fleetwood Mac this Thursday bringing the goods. Yes, they have food here, no, we did not partake, as we’ll be getting our snack on at Mekong when we swing around to the front side not soon enough. I liked the house beers that I drank, but you can keep all the showy shit. I’ve denounced the Randall as scurge of the earth since the time I first saw one in the early oughts and still stand by it. Make a good beer. Don’t hide your beer behind ‘stuff’. Sorry, that’s how I feel about it. And get off my lawn! Again, stayed with the sane beers, and I liked what I had. Something for everybody, I suppose?

Large Brewpub with trendy beer styles plus guest taps and food. Vibe is okay, not a lot of bar seats and wait for a table is very long. Not as crowded on a Sunday for a 2nd visit and there are many empty tables, yet a 20 min. wait. Food is mediocre compared to Mekong side, lesson learned. I liked the Fancy AF (lol) and the Uncle Baby Billy (lol), both are pale ales. I don't like fruited sour smoothies or milkshake IPA's (sorry) but everyone else does and it was hilarious to me how everyone was taking pictures of their flights. I bought some amazing glasses that they serve water in. The service was great.

Arrived mid-afternoon on a Saturday. We originally wanted to sit on the deck, but changed our minds and grabbed a 4 seater. Beertender was quick to grab us our beer, but seemed to be a little pre-occupied. The Answer had 10-12 of their own brews, plus another 18 or more guest beers. The beers were tasty.
We shared 4 different appetizer/snacks. Everything was decent, except the wing wings. They had an off-putting aroma (old grease(?) mixed with sweet and sour was not a good combo). We didn't hang long.. it was time to move on.

Service can be hit or miss depending on how busy they are so keep that in mind.

Food is great however Mekong is much better.

Tons of options to try between in house and the other 20 taps lines. If you can't find something you like, try the slushee, low abv (3.5%) and very approachable.

Vibe is funky. A mix of various restaurants spaces - new and old, eclectic styles, and clean bathrooms (according to the Mrs.)

Approachable beers for the initiated. Guest taps allow amazing alternative options... for a brewery. Wait staff was very attentive and ready to assist with mapping out the area to try alternative RVA options. Great experience and really great beer!

A cool joint, awesome food, and great beer. My main beef was from an interaction today trying to get a growler fill. I was told by the staff that the screw top growler I brought was unable to be filled. So I made the same selection and went with the crowler, and extra $1.50 for that. After services were rendered the employee told me I could fill my growler with any of the guest taps, just not their brewery. This is infuriating. Why would there be a difference. Why would you treat the taps differently? Why would you tell me I can't fill a growler, then post purchase tell me I can fill it, just not with the beer I wanted? When I told them that was a silly rule they tried to pass it off as a screw top growler wouldn't hold the carbonation. Well I'm drinking their Crowler, and it's fucking undercarbonated. If you have a growler policy, that's fine, I get it, I've been there as the guy getting a growler filled, and the guy filling the growler. But don't make a rule then apply it to only half of the taps, without any clarification until after purchase. That's some bullshit.

Every other time I've been here for food or beer the experience and service have been excellent. Great food, great really interesting beers, excellent service, but man this growler fill burns me up, and while we are on it, individually crowler's don't need individual plastic bags.

The Answer is located a bit out of the way in the back of Mekong in a strip mall sort of place outside Richmond.

Big, open place with a long bar and plenty of tables and a little to go area to the left. Vibe is laid back and happy. All the bartenders are quick, friendly and know their stuff.

Selection is enormous, with a number of taps devoted to in house beers, and a huge list of guests. Easy to find something you want, really hard to choose. Most styles are represented, at least on the guest taps, everything from kvass to massive stouts were on when I was here. Everything is available in smaller pours, that are still big enough to really get a correct opinion of the beer.

Food is a scaled down version of the Mekong menu, so really good Vietnamese food, once again plenty of choice, and very tasty.

Overall, this really is a beer Mekka, and any beer nerd would be missing out by not making the trip here if you're in the area.

An interesting place. Pretty large, a stage, a back bar, random couches, really nice bathrooms! Almost like they bought a building and tried to fill it up with whatever and have it look like it was planned and made sense.
Beers, I mean others beers pummeled with juice were pretty awesome. Service was fine.
Overall, quite interesting...I'll leave it at that.

No other place like this. He has really gotten into the glassware game with Black Ninja Designs. My wife and I drove 2 hrs, got in late about 9PM, ordered appetitzer, entrees, flight and asked about glassware. Our server said it had been sold the day before and limited to a certain number in line. But she would ask the owner. He came out and greeted us, and made an exception since we had traveled and were noobs.

If The Answer did not have its reputation, it would be one of those "where am I and what did I get myself into" spots. Its located in the back of a shopping center, not super clearly marked at night time. Once inside, the vibe is welcoming overall though a bit disorganized visually. Quality of space feels decent. The service was quick and beers were superb (though sweet). Prices were very reasonable considering. I would have loved to spend more time here. Didn't get a chance to sample food, though ate at Mekong prior (highly recommend). Disappointingly, take away options are very limited. I'll gladly return any time I am in the area.