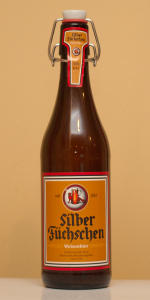 S- Next to nothing in the smell, and i mean nothing! No cloves, bananas, no aroma whatsoever

T- Very bland, hints of grapefruit but i couldnt get any classic weizen flavours or any other flavour out of it either!

D- Poor flavour as far as weizen goes, another dusseldorfer alt brewer who should stick to brewing alt!

A: Pours a slightly hazy pale golden color with a decent white head.

T: Slightly tart wheat flavors greet the tongue; the grainy sweetness of pils malt takes over before a significant hop assertiveness leaves you with a bitter finish. The yeast is very clean with no noticeable esters or phenols.

D: Like most wheats, this one's light and drinkable.

Overall: An interesting beer... While it's listed here as a Hefeweizen it's not (and you'll be disappointed if you're expecting one0. It's brewed by a Düsseldorf Altbier pub, so it's really its own creation. It appears to be brewed with the same yeast as Füchschen's Alt and likely fermented at the same low temperatures, so the result is a very clean beer. It also has a more assertive hop presence, again like their Alt. The end result is a beer that's more like a Koelsch with Alt-level hoppiness than a Hefe. It's not bad (and would probably appeal to the Three Floyds Gumball Head crowd) but nowhere near the quality of their Alt. I guess it's worthwhile if Alts are too bitter or dark for your taste, but otherwise I'd stick with a classic Füchschen Altbier.