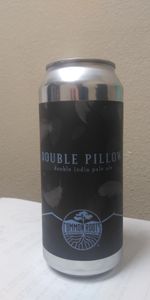 From my first shipment of Tavour. They seem to find diamonds in the rough. This is the brewer's highest rated and I see it climbing the AIPA ranks. "One-off" is probably not an accurate prediction as this is keeper.

Not being a fan of the style, I don't have too many AIPAs twice. Double Pillow I would, although probably after exercise and in the summer. Very refreshing without the bitterness. Reminds me of NEIPA in the nose (tropical fruit bouquet) and in the mouth (soft.) Looks the NEIPA way also. But at 8%, let's enjoy what we got.

I went on CRBC's website and they are a father-son operation in a small community not close to anything urban; being equi-distant to New York, Montreal and Boston. But CRBC has been at this for eight years, bringing brewed culture to locals and good beer to tourists with a taproom since 2014. They push the other cool buttons like sustainability. I wish them well thru this medical crisis imposed by a not-too-smart leader.

Hazy orange body with a thick off-white ring and very occasional lacing. Papaya, melon, grapefruit, hop resin, slight lemon zest, peach, and lime, dankness builds over time. Man the taste explodes with the dankness and fruit simultaneously up front, add some juicy fruit gum and mango to the mix, dries out completely by the finish with bitters carrying you home, well done. Feel is hazy but dank, thinner but plenty hoppy and soft, good inner core of juiciness.