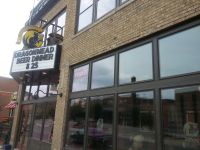 Beers ranged from good to phenomenal and the tap selection was strong. Service was decent enough as we never had to wait long for drinks. Didn’t eat anything here. Atmosphere at the bar was nice. The overall experience was solid, and I would likely come back.

Rated by Jim67 from Michigan

Reviewed by hotsudge from Canada (ON)

Vibe was good for a Sunday afternoon with a couple of kids in tow. Other families were there too which was nice to see.

Server was friendly with a big smile but he was new we think. We were quickly told the first few food items we wanted were sold out or they just didn't have them. How does a restaurant not have half of their appetizers or their feature dessert (which was their one and only). The food we did order was good. The kids sized portions were fairly and yes, parts of the kids menu also not available.

But we went for the beer... And the menu is impressive. Several items were not available but we still have a great selection to choose from.

I ordered a $12 snifter of a Belgium kriek and it came flat. So disappointing! Between the two of us we had 4 beers and not sure what the deal was but nothing wowed us. Dirty glasses? Kegs not kept properly? Lines not clean? Can't put my finger on it but something was off.

So in the end, it was an okay visit. Not good enough to go back. :(

4.4/5  rDev +1.9%
vibe: 4 | quality: 4 | service: 4.5 | selection: 5 | food: 4.25
Had lunch downtown recently at HopCat, been wanting to get here since the opening a year ago. Service was excellent, cheddar ale soup was great, reuben was decent, and the crack fries were up to the hype.
Beer selection was completely top-notch, with a focus on Michigan brews. Most interesting is the Local 30, year round brews always available on tap and for growler fill for $12. Decent prices overall.

Edit: Parking sucks a bit. Small lot behind the building, with some pay lots and on street parking available within a half-mile. Traffic right now isn't the best either, with the light rail construction on Woodward ongoing. Just plan accordingly.

Reviewed by FyreStorm from Canada (ON)

I really liked this location, food was a good as I remembered and the crack fries were awesome.

The beer selection was tremendous but remember thinking GR had more...overall really impressed and heading back in October...

I like the vibe, the black velvet portraits of Detroit area musicians. Can't ask for better selection - with 130 beers on tap, including 30 locals. Well organized list.

Bartenders were very helpful and friendly, and the burger and fried I had were great.

Reviewed by ZachDow7 from Michigan

3.43/5  rDev -20.6%
vibe: 4 | quality: 4 | service: 2.5 | selection: 4 | food: 2
I love Hopcat East Lansing, but I live closer to Detroit. They have a great selection but run their prices and growler fill policies different than all the other Hopcat's. I was in the East Lansing Hopcat three weeks ago after the Alpine Beer Dinner, they filled a growler of Duet for me no problem, aside the nice bill ;), I tried to fill the same thing in Detroit and I was told I couldn't because a pint of the beer was 8 dollars and a 7 dollar pint was the limit for what they said they could fill a growler of. I told the bartender I had done the same thing at EL Hopcat and had no issue, and they should have the same policies if they are operating under the same brand name and serving the same beers. Anyways after 20 mins I got my growler lol. Not trying to sound bitchy I just think you should have the same policy at your chain brewpub that's all.
May 10, 2015
Rated: 4.19 by Gemini6 from Michigan

Rated by JasonR1975 from Michigan

We immediately ordered Hopcat's famed "crack" fries as an appetizer while I perused the drink menu. I had checked out the online tap list, and I could see the one in my hand was quite different. I found several beers that were interesting but were $9-12 a glass, which was more than I was willing to shell out. I ended up having four beers: Master of Disguise, No Fracking Way from Latitude 42, Oblivious, and Batch 100 from Tapistry Brewing. All the beers were good and ranged in price form $5.50-9.

The bartenders were a little slow, but I was not going to complain with the amount of people that were in the place. Our crack fries were good and we both liked our meals. I didn't chat up the bartenders until the end because of how busy they were. When I did ask a question I had the pleasure of speaking with Debbie. She was super friendly and helpful. She said she loved talking about beer.

Overall, my experience was pretty good. I am not into crowded places, so hopefully I can revisit once the dust settles and hit it up on off hours. I thought the prices were a little high, but the beer I spent $9 on, Oblivious, was phenomenal. (I really need to go to Griffin's Claw). The biggest detractor from this place was when I went outside to wait on the old lady to go to the restroom before we left, homeless guys were hitting me up for money. Which is why I knocked the vibe score down a notch. I will probably hit this place again on another visit to the D. I personally prefer the Corktown area to this area though.