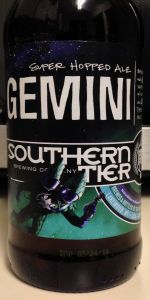 3.75/5  rDev -3.4%
look: 3.75 | smell: 3.75 | taste: 3.75 | feel: 3.75 | overall: 3.75
This was poured into a snifter. The appearance was a semi-hazy bronzed color with a light transparency about it. Carbonation could be seen rising at a moderate pace. A one finger white foamy head started and dissipated leaving messy lacing running all over the place. The smell starts off with a sticky resinous sharp sprucy/piney-ness that lingers over some light caramel malts. The taste balances nicely between the caramel malts and the bitter sprucy/piney-ness. It leaves a nice dry sprucy/caramel aftertaste leading into a light dry piney finish. On the palate, this one sat about a medium on the body with a nice sessionability about it. Carbonation runs nicely to allow a nice bitterness to invade and become what its supposed to be for this beer and style. Overall, this was a well worthy DIPA I’d have again.
Jun 27, 2017

4.04/5  rDev +4.1%
look: 3.75 | smell: 4 | taste: 4 | feel: 4.5 | overall: 4
I have been doing a number of brewery-oriented horizontals as a part of the ongoing eradication of The Bottle Backlog here at Chez Woody & by some circumstance, I have a number of Southern Tier's beers to add to my list. I have been working in fits & starts on this horizontal, having been sidelined by a massive head cold & then by my acquisition of an SN Beer Camp Around the World 12-pack. I now continue my triumphal return with this beer.

From the bottle: "Super Hopped Ale"; "Brewed with 6 varieties of hops and 4 types of malts".

I LOVE that they have reclassified this as an "American Strong Ale"! Not every beer is or deserves to be designated as an AIPA or a DIPA. Mine has over a year of age, DTD "DOB 04/01/16 06:37AM". Does that make it "bad"? Of course not! Let's see how those hops held up. Even better, let's see how it is doing as an old(er) American Strong Ale!

I Pop!ped the cap & commenced a VERY gentle pour into my awaiting glass. a vigorous in-glass swirl raised just over two fingers of dense, foamy, tawny head with good retention. Color was solid Amber (SRM = > 7, < 9) with NE-quality clarity. Nose had a molasses & bready maltiness, indicating that the hops had fallen away, but who cares? If it is an American Strong Ale, it can be the aging process that drives the beer & not necessarily the hops. I drink hoppy beers all the time. It is nice to try something new, as long as it is palatable. Mouthfeel was not big, not full, it was downright viscous! I nearly had to coax it out of the bottle with a spoon. Oh, now I get it. It was the old one-two punch with the bready & caramel malts gently caressing my tongue before its twin brother, a citrusy bitterness came out of hiding with a leather-encased lead sap & caught me with a rabbit punch behind the R ear at the base of my skull. That is TOTALLY illegal in boxing as it is the site of your fontanelle, the last place on your skull to harden as an infant & which NEVER fully hardens. Want to give yourself a roaring headache to get out of something? Massage that spot for a bit & see how you feel. F'in' Gemini got me right there! Good. I like a challenge. I let the pair roll around on my tongue for a little bit to tire them out. I then came wit' th' Pisces Punch, which is a R jab to the solar plexus. I don't care how buff you may be, that will tear the wind right ahttah yer sails! Once Gemini was down, I began to relax to better taste the caramel malt with a tropical fruit background. But where was the alcohol? This was as smooth as silk until I caught an unseen L hook between the eyes. Lights out, boys! I came to with smelling salts, or maybe it was an open bottle of this brute, with a start. Where was I? Oh, yeah, I was trying to review a beer when these twins showed up with a bottle of whoop ass & laid inta me like nobody's waking up tomorrow. Finish was dry as the alcohol suddenly began to assert itself in a dragon-like way with fire coming up from my belly & into my breath. Time to go. I gotta work as a heavy-machine operator!

Reviewed by LAp from Ohio

3.87/5  rDev -0.3%
look: 3.5 | smell: 4 | taste: 3.75 | feel: 4 | overall: 4
Sparknotes review: not a bad beer. Clear copper with bubbles of carbonation prominently rising from imperfections in the glass. More dominantly malty than anticipated. There's a great pine, grapefruit, and citrus hop backbone here - one with a lot of nuance - but one that ultimately gets overpowered by the dominant malt. Mouthfeel is medium with respectable carbonation. Overall, it's decent, but feels like it missed being really exceptional. Perhaps it's that my palate has swung more towards purely westcoast or northeast IPAs, but the malt here feels like it detracts from what could have been a really excellent brew.
Feb 08, 2017
Rated: 4.37 by Chackman151 from Arizona

Reviewed by Ikeithbot from New York

O: this beer is awesome!, The bitterness of the hops rule! A very solid beer and one the best offerings from Southern Tier.

Taste keeps dropping more pine, then you pick up some grapefruit because of the sizeable triple digit ibu count I would guess. A lot of bright pine forest notes pushes this one. Other citrus flavors are in there too, but pine and grapefruit have a sizeable lead on them.

Bomber format for this is expensive. Its not disappointing, I just don't see how it would get into the rotation other than a spot start here or there. There are just as good if not better offerings in almost every distribution footprint that are lesser priced.

3.9/5  rDev +0.5%
look: 4 | smell: 4 | taste: 3.75 | feel: 4 | overall: 4
Poured a copper body with minimal head and lace patches across the glass. Piney, oily, hoppy aroma with a touch of sweetness. Has a touch of sticky malt in the taste department as this medium-bodied beer passes over the tongue smooth, making it slightly easy to drink, with a dry, earthy, even bitter hop profile dominating the taste buds. Beer has a filling quality to it and a minimal boozy, heated finish.
May 22, 2016
Rated: 3.48 by bobtaylor0414 from Pennsylvania