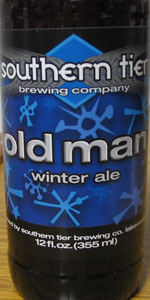 Notes: Our winter offering is here to quell your shivers and get you through the coldest of nights. A rich marriage of hops and barley to cast light upon the evening and melt your mind out of the snowdrifts. Old Man Winter’s earthy hue and thickness lace around the glass, inviting you to linger in its warmth and share the spirits of the season with your friends and family. A deceptively strong brew, it’s best to sit and ponder with this old man, sip by sip.

An orange amber with a decent sized off white head. A touch of lacing her and there. Some chill haze.

Taste is malty with caramel, lots of toffee and lightly roasted grains. Toasted bread as well. Some notes of faint plum and yeast esters. Hops are mostly earthy but bring a bit of orange and orange zest in the finish. No real alcohol presence in the palate. Taste best on the cool versus cold side as the malts really develop and the yeast complexity deepens.

Medium weight with some fullness in the carbonation. Quite drinkable for the abv.

A decent if unremarkable winter ale. It brings a somewhat rich toasted malt body and taste to the palate and has a nice hop bitterness offset. The body seems somewhat weak but not bad overall. The alcohol presence at 7.5% ABV is not readily apparent, which is a plus. I'm not sure why there is little presence to the smell, but it is what it is. Otherwise, a pretty good winter ale all around.

Pours not even a finger of white, soapy head into a shaker pint. Initial lacing looks ok. Body is an odd, dark orange, with brown. Quite transparent. Basically no bubbles coming up. Doesn't really look like a winter warmer, and so far it looks average overall.

Nose is a little hoppy, some clear notes of mandarin orange, lemon. Subtle notes of bready oktoberfest-like malts hiding underneath. Smells ok, a little heavy on the citrus for a winter warmer. Nose is not huge either.

Hops certainly hit first. A little pine, some citrus for sure. Malts only briefly hit for a nanosecond at the end. This is fine, I would like something a little maltier and overall more flavorful. On some less assuming sips, this is very close to that classic "this just tastes like beer".

Mouthfeel comes across as a lighter ale as well. Carbonation is medium-high. Body is on the lighter side. Somewhat dry. Bitterness is medium as well. Good mouthfeel for this beer, but again not what I would think for the style.

Drinkability is pretty high. This is really as straight forward as they come. Think lawnmower, but slightly darker.

Appearance turned out pretty much as it started, uninspired. Lacing was barely visible.

Overall a very standard beer. Nothing bad, nothing great.

Not a bad ale - just not the kind of ale you might be expecting packaged the way it is. Very balanced - best drunk with dinner instead of by itself. Hops are pronounced but this isn’t like an west coast ipa. I probably agree it’s most like an English strong ale. Has some sweet notes, but nothing especially wintry or holiday-like.

Wanted some more malt and toffee. Was not bad, just wanted something a little heavier for a winter ale. This tasted like a winter ipa. I would imagine it's good on draft if its fresh.

Pours a deep amber with a small white head
Smell is not very strong but has a maltiness that hits the nose if you pay attention
Taste is pretty good, a little more hoppy than I though it would be. Something about the finish I find off, can't put my finger on it.
Mouth feel is nice
Overall not a bad beer but with all the good beers out there I will not be buying this one again,.

Nose translates to the taste. Good maltiness, but not much sweetness. There is a slightly sour bitterness at the end which spoils the drink a little.

Mouth around medium, finish that lightly sour small bitterness. A little warmth in the back of the throat

Overall, this beer is listed as an English old ale, but the only real evidence of that is the slight warmth at the end. Winter Warmer might be a better style for this okay beer

A: dark mahogany color with a thin off-white head

T: caramel malts and earthy hoppy bitterness. Following that is some generic dark fruit. Candi sugar and resin close this out

O: too hoppy for an English Old Ale, with not enough depth from the malts. Also a bit too light in the mouth. - not a bad beer, just not a great Old Ale. Tell me this is an American Strong Ale and I’ll believe it

Clear dark amber/light brown in appearance, with a small white head. Decent retention, with some spotty lacing.
Aroma of toasted brown bread, cooked red apple, cinnamon, vanilla, brown sugar, tart cherry.
Taste of brown bread, caramel, toffee, cherry, cooked red apple, cinnamon, raisin, cranberry, and vanilla. Despite the description, it is actually not particular sweet and there is a lingering earthy and piney bitterness on the finish.
The mouthfeel is roughly medium, seemingly a bit thin for the style, but well carbonated and makes up for it sheer drinkability.
A pleasant Old Ale. Nothing remarkable, but it gets a lot of points for its sheer drinkability without being offensive or bad in any real way.

Mouthfeel - medium bodied, medium plus carbonation, caramel upfront, pine in the back

Overall - this was a decent brew, but there was nothing about it that would make me want to re-visit. Doesnt profile to me as a 'holiday ale'. I think it is misclassified as an English Olde Ale, really is bordering on IPA territory

It is December first, so time to start knocking out the holiday and winter themed beers. This one fits the bill. Dark brown body with great clarity and little head. Nose is balanced but shows its nature with toffee and caramel malt notes.

Thick in texture and a little more carbonated than I was hoping. Boozy and malty and laced with yeasty esters and dark fruit. Worth a try but not outstanding for the style.

12oz bottle into tulip
Bottled on 10/11/18
Pours a clear auburn with thin off white head
Nice interplay of malt and hops sweet and piney
Toffee and caramel,  followed by pine and some booze
Medium- bodied,  average carbonation,  bit syrupy
Overall tastes like a nice hoppy brown ale,  I like it

Unimpressive pour, Amber Brown with almost no head.
Smell is hops and hops. Would've suspected an ipa.
I can detect some subtle cinnamon and ginger to go with the hops.
It is a little bitter for a winter ale.
Overall, while I usually prefer subtle to overbearing, this was just an ipa with a hint of cinnamon.

Beer poured brown with a nice tan head on the original pour.

Nose is malty, with a hint of vanilla.

Had on tap. Solid winter warmer with notes of caramel and vanilla. Christmas spices are present but fairly muted. Mouthfeel is moderately carbonated and creamy.

12/29/17
Look: Dark brown/copper with a light tan head of very small bubbles
Smell: Cinnamon, clove, gingerbread, some hopiness
Taste: Christmas spices... tastes like a Christmas candle smells. But also sweet with some bitterness from the hops to balance things out.
Feel: Medium body, very smooth carbonation, a bit of warmth from the 7.5% but not too noticable.
Overall: Good beer, would get again. Not your standard Christmas beer given the hops, but they fit in nicely.

Like my 1st girl, I did not know what to expect. What a great experience. The taste was excellent. This was a draft and really fresh. Hope this is still available next time.

L - Deep ruby ed and a finger of off-white head

When I'm in the mood for Southern Tier, I usually go for 2XIPA, because it's delicious and always available at the local store. Today it was not. Even though I'm not a huge fan of winter ales, I decided to give this one a shot.
Pours a nice copper color. Not a lot of head or lacing here. Smells like sweet spiced malts up front, but doesn't lack that nice hop aroma. Booze definitely hits the nose. The mouthfeel is surprisingly moderate, with plenty of carbonation. Starting to think this ale goes a little out of bounds for its style. The taste confirms my suspicion: malty, spicy, subtle sweetness, but with a refreshing amount of bitter hops to round it out.
Pleasantly surprised by this brew.

It pours an amber/brown color with a white lumpy head that dissipates within seconds. What there is of the lacing slides down the glass. The smell has some roasted nuts and alcohol. The taste has some clove and the roasted nuts come back that seem to mix in with the hops for a good balance. The mouthfeel is about medium with the alcohol felt. Overall, this is good for me.

I bought a bottle of this off the Binny's single shelf. It poured a clear mahogany with thin white head that is not leaving any lace. The scent had hints of oatmeal. The taste was decently balanced for a strong ale. The mouthfeel was medium in body with good carbonation. Overall it's a decent beer.