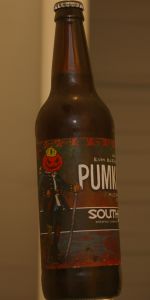 Notes: Back in 2014 we had the good fortune of finding a cache of rum barrels which we quickly filled with Pumking making what was affectionately called “Rumking.” We were lucky to have found more barrels, and in 2018, found some of the best we’ve ever used. This batch is at least as delicious as versions past.

Imagine our inimitable Imperial Pumking Ale as the captain on the high seas, flying the Jolly Roger. The ‘King sails for ports unknown in this limited release. Rum Barrel Aged Pumking has been kept like secret treasure in the hollows of the brewery, patiently awaiting discovery. Yo ho ho!

Enjoy Rum Barrel Aged Pumking now, or keep it hidden standing upright in a dark and cool place until you can say ‘anchors aweigh!’

I've been a longtime fan of pumpkin ales, and have Pumking quite a few times, although not recently. I thought "rum plus Pumking ... a good match!" Maybe so, but not when the rum drowns out any sign of the actual underlying beer.

This was pretty much like drinking straight rum, with some cinnamon and other pumpkin spices tossed in, and some typical beer carbonation. The alcohol burn from the 13.4% ABV is substantial. Now, I like rum, and I like barrel aged ales, but this beer has zero balance to its components.

I still kind of liked the beer, kind of, but couldn't drink much. I had a few ounces, and then couldn't finish it. It's a rare fail by Southern Tier.

Reviewed by Seanjohnhunt from California

Reviewed by Rapscullion from Massachusetts

3.53/5  rDev -12.2%
look: 5 | smell: 4.5 | taste: 3 | feel: 3.5 | overall: 3
2019 vintage. 13.4% ABV from 1 pint bottle.
Pours a beautiful deep copper hue with very light carbonation and a cream head that disipates very quickly.
Aroma is a huge spirit hit overlaying butterscotch in a very appealling way. The first sip follows through with an overwhelming hit of rum that almost completely obscures the typical pumpking flavors buried beneath.
There is no sublety or integration to this beer, I may as well have poured a shot of rum into a pint of pumpking. Try a Goose Island or a dozen other spirit finished beers that do it really well.

Rum Barrel Aged Pumking is a truly amazing beer with its bright bronze color and a creamy eggshell froth that carries a sturdy backbone of bread crust and bold caramel sweetness. Fresh-baked toast, roasted pumpkin, and graham crackers come to mind with a sprinkle of cinnamon, nutmeg, almond, and hazelnut do just enough to emphasize the pumpkin quality in complementary fashion. A buttery praline-like sweetness shares a savory tone while the rummy spice adds a drinkable heat.

Rich and non-waivering on the tongue, a creamy, bready and with a robust spicy sweetness that I would not have expected from a beer with such palatability. The return of graham cracker dryness and aftertaste is all I need to keep coming back.

A- 22oz bottle pours into a becher with a clear copper body and a one finger, frothy cap. Good head retention leaving a tall ring around the outside of the beer. Lacing is spotty.

S- Within a millisecond you can tell what beer it is with that signature Pumking aromatic strength. Nutmeg and allspice and spice in general leads off into caramel, graham cracker and general pumpkin pie notes. Getting just a hint of rum, kind of like sugary boozy fruits, here.

T- That barrel was pretty subtle in the aroma but you get hit with it immediately on the taste buds. The barrel is not quite even in terms of strength with the base beer but it is pretty close. Spicy nutmeg, allspice, cinnamon and ginger notes lead into pumpkin pie, sugary and fruity rum and caramel malts. The pie flavors and rum work quite well together. Great bitter and sweet balance.

MF- Puffy and slightly creamy medium-heavy overall body. Carbonation is at a medium level and the beer finishes with a nice spicy bitterness.

As one of the fans of the OG Pumking I gotta say adding some extra sweetness, booze and rum flavor really works out very nicely. The barrel and the base beer just play off of each other in the right ways.

Reviewed by Giggy from Michigan

4.42/5  rDev +10%
look: 4.5 | smell: 4.25 | taste: 4.5 | feel: 4.25 | overall: 4.5
A little background on this one. I was a Plankowner (commissioning crew) on the U.S.S. Normandy (CG-60) & we had our 25-year reunion in 2014. One of my friends, Kenny, was back in NORVA with his wife, who was originally from BALMD. They lived on Whidbey Island, WA & came back early to visit his folks with her going to see her peeps after the reunion while he flew home for work. When she got home, Kenny had passed peacefully in his sleep! Arrangements were made for a burial-at-sea from the Normandy, something which is virtually unheard of - you may request a burial-at-sea, but NOT the platform. A bunch of us came back for a short underway period, including an STG1 whom Kenny was mentoring. Afterwards, we stopped at the Total Wine & More in Norfolk & he inquired as to this beer. Sold out! :=( I told him that I would BOLO for it & lo & behold, I found some! I sent him two or three bottles, keeping one for myself. Today is its day!

I Pop!ped the cap with tears in my eyes, but I was able to recover & carry on smartly with a slow, gentle, C-Line pour. I did not raise much more than a brief finger of fizzy, foamy, rocky, tawny head before it quickly fell away to wisps. I was in no mood to stir things up with an in-glass swirl so I left it as it was. Color was a gorgeous Deep-Amber/Light-Copper to Copper (SRM = > 13, < 17) with NE-quality clarity. Mouthfeel was full and dense, like a dollop had been scooped into my mouth & onto my tongue. The taste was fantastic! Earlier, I drank an even older bottle of straight Pumking & the difference that the rum-barrel aging was making was phenomenal. Now, it had a pronounced spiciness along with a dried, dark fruit, especially raisin, flavor! Phew! Plus, it was no playin' around with its alcohol. It was definitely bringing the heat & taking precisely NO prisoners. Phew. Well, once the initial shock began to wear off, I donned me bandana, raised the Jolly Roger, poured a wee dram of demon rhum & set sail. This was getting better by the sip. It tasted neither of rum nor wood/barrel. per se, but it definitely amplified all of the spiciness of the base beer. I do not personally prefer it, but if you've had CAPT Morgan's Spiced Rum, it will give you an insight as to this. I disdain it because it, like most rums, tends to be sweet & when the standard mixer is Coke … 8=p Sweet atop sweet. Warming, this acquired a faint rum taste, but it was the spices that really jumped out. Finish was deadly dry, just the way I prefer EVERY alcoholic beverage! Oh, & yes, Virginia, dry rum does exist, it's just not popular. YMMV.

I Pop!ped the cap on this iteration & started a slow, gentle C-Line pour since there was no Kenny to mourn on this one. I got just over a finger of dense, foamy, rocky, tawny head with moderate retention that left some nice lacing in its wake. Color was Amber to Deep-Amber/ Light-Copper (SRM = > 9, < 13) with NE-quality clarity. Nose was VERY spicy & I think that is where the value added to the rum-barrel aging comes in. It does not impart a rum flavor so much as it amplifies the spiciness that exists in the standard version. Mouthfeel was medium-to-full, but a little on the light side for "Imperial" anything. This one was more sharpish in terms of how the blending of the rum and the beer was going. Even at 2.5 to 3 years since bottling, it could have used even more time, IMHO. Here, the alcohol was truly pronounced and it was working against the spices. Finish was dry and spicy, but I just felt that it was still a bit young. YMMV.

4.47/5  rDev +11.2%
look: 4 | smell: 4.5 | taste: 4.75 | feel: 4 | overall: 4.25
2019 version: Pours a clear light bronze/caramel color with a fairly fast receding head. Smell is reminiscent of ethyl, rum, spicy pumpkin, again rum. Wow.Taste is of pumpkin, pie spice, rum,more accurately tastes like a strong pumpkin spice rum cake if there was such a thing- Feels well carbonated, medium bodied, Pumking aged 5 months in Rum barrels does wonders for this mediocre beer. Adds depth and character, not to mention a boat load of booze in taste and ABV- Far better than other variations of Pumking. I don't even like Southern Tier-
Nov 19, 2019
Rated: 3.48 by BeerMe8 from Florida

Reviewed by howardnss from Pennsylvania

4.02/5  rDev 0%
look: 4.25 | smell: 4 | taste: 4 | feel: 4 | overall: 4
2016 Vintage
Pours a medium orange color, appropriate foamy white head. Muted PumKing aroma. taste is tangy, pumpkin spices have mellowed, rum barrel is faded and reduced the bitterness of the hops, which is nice. Overall this is better frank fresh, but I had to try aging one.

Right out of the pint bottle the thing was beautifully orange with a nice creamy head. The smell was by far the best aspect of the beer, and was quite possibly the best balanced smell of any beer I have ever experienced. Mouthfeel was very astringent, not bad, just a very tight feeling on the tongue. The taste, which is why I feel was rum-forward (and I mean rum-forward) was at least tasty due to its rum flavoring (which at least I am a rum drinker and favor this type of booze.)

Anyway, I still think this is at least an exceptional brew, if not spectacular. If I find another one I plan to let it sit for two year and give it another go...

4.41/5  rDev +9.7%
look: 3.75 | smell: 4.5 | taste: 4.5 | feel: 4 | overall: 4.5
Decanted from a 16.9 oz (500 ml) bottle into a custom taster; 2019 vintage.
A: Pours a crystal clear, light amber color with a less than one finger, off-white head, low retention, and almost no lacing.
S: Aromas of rum, vanilla, rum, and caramel.
T: Sweet and boozy. Flavors follow the nose, but enough pumpkin to claim membership in the style. Low bitterness very much in balance.
M: Light to medium bodied with lively, but still moderate carbonation. Frankly, just not that boozy despite the ABV.
O: Really delicious, rummy version of the Pumpkin Ale style.

4.08/5  rDev +1.5%
look: 4 | smell: 4 | taste: 4.25 | feel: 3.75 | overall: 4
Bottled 2019. Poured somewhat hard from a bottle resulting in a huge amount of off-white head that faded quickly to a couple fingers and then took its time. Smelled faintly of rum. Color was a pale amber that was effectively clear. The pumpkin flavor was almost a background flavor, with a buttered-rum flavor up front and cinnamon/nutmeg spices on the back. Almost like a pumpkin-based rum that isn't too boozy. Very interesting take on rum-barrel aged pumpkin beer, and a must try if you are a rum fan.
Sep 30, 2019
Pumking - Rum Barrel Aged from Southern Tier Brewing Company
Beer rating: 90 out of 100 with 563 ratings