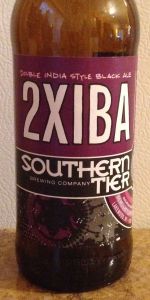 Notes: Brewed with 3 varieties of Hops, and 3 types of Malts, Oats and Mustcovado sugar.
View: Beers | Place Reviews
Reviews: 39 | Ratings: 165 | Log in to view all ratings and sort
Reviews by qchic:

Not quite black, and appears a little thin for 8% as I pour. After the head fades, a nice ring remains. Aroma is roasty and hoppy, with a bit of fruit and pine, along a hint of smoke. The flavor starts with tropical/citrus fruit and morphs into chocolatey roast. Hop bitterness is there throughout, contrary to what I read in other reviews. Body is medium, with only a touch of oat slickness (a little more could have been nice). Not my fave in the 2X series, but not a bad buy.

Draught @ Headkeeper: This one pours a dark brown color. There was a thin tan head that left lots of lacing. Good nose. Citrus and floral hops, chocolate malts and some roastiness. The taste is good. Chocolate and roasted malts. Citrus hops. Somewhat bitter. Nice!

Pours black in color with a khaki colored head. Not black like an imperial stout, but black like a schwarzbier, or something thinner than a stout anyway.

The aroma is tart, hoppy, and sweet. The more it warms the sweeter the aroma gets until I eventually believe it smells like maple syrup.

The flavor is roasty and earthy with a high level of malt sweetness. The hops are present, but definitely take a back seat to the malt's representation here.

Somewhere around medium bodied. It could probably use a tad better carbonation. The 8.0% is well hidden.

2XIBA is a self-proclaimed "double india style black ale" that isn't actually black. Colour is easy to spot, clarity too for that matter. Its shadowy brown body isn't really all that dark; currant-like highlights enliven it. The head, however, is a few shades deeper than norm and is too tarnished to be called white.

Black IPAs remind me of root beer insofar as they pair disparate but highly distinctive elements. In this case it's merely the impression of evergreen, balsam fir, tree bark, roots, chocolate, anise and molasses rather the physical ingredients themselves (though muscovado sugar is actually added).

The first taste evoked a furrowed brow - not exactly what I was expecting. I suspect this bottle (purchased at a prominent retailer in upstate New York) may not be exactly 'fresh' but without a 'bottled on' or 'best before' date I can't be sure. That's something Southern Tier aught to consider...

What's tasted is a tired, considerably worn-out flavour profile consisting primarily of stale coffee, oxidized chocolate chips and over-steeped tea. While I know hops were historically used a preservatives, in the modern context - and especially for this style - they should be bold and lively. Alas, they are not.

Obviously, this is partly because the unrefined, strongly molasses-like, sweet muscovado sugar cuts into the earthy, pungent, flowery bitterness of those three undisclosed types of hops. The finish sometimes resembles a particularly spicy gingerbread, with boozy esters adding a fruitcake-like note.

One of these days I'll make the four hour drive to Lakewood, NY. When I do, 2XIBA will be one of the first beers I try because, frankly, it's one of the few from Southern Tier to date I haven't really enjoyed (we're talking over a decade of reviewing their beers). Maybe it's better than this, maybe not. Buy at your risk.

A: The beer is a deep dark brown color with a short off-white head that fades quickly and leaves a thick lace on the glass.

T: The taste starts out sweet with flavors of chocolate, dark fruit, coffee and licorice. Then a hearty roasted malt character comes in. The hops presence is weak for the style but it still brings a good balance. The after-taste is slightly sweet and slightly bready.

O: Tasty, goes down easily, not too filling, good kick, good representation of style, it’s a decent beer but there are better choices within the style.

Very dark brown color with a bit of red background. No head to speak of.
Aroma of dark fruit, chocolate, and pine.
Taste followed the nose. Chocolate, raisins, and pine resin.
The last few black IPAs I have tried have reminded me of a hoppy stout, and this is no exception.

A: Poured from the bottle into a Piraat tulip/snifter-type glass. On the pour it looks brown, but in the glass it appears black, with a half-finger light-tan head that settles quickly.

T: First impression is of burnt charcoal. On second sip, I get more sugary-sweet malt (brown sugar keeps coming to mind), roasted barley malt and some woodsy tannins, but that burnt carbon really lingers on the palate and offsets the sweetness. Heat from that 8% ABV is felt in the belly right away (though that could be because I'm drinking this on what is more or less an empty stomach, before dinner). As it warms (and my palate adjusts a little - or at least gets used to that charcoal taste) I get a little bit of citrusy hops - think clementine oranges - on the back end of the tongue.

M: Let's call it medium in heft. Feels slightly thin on the body, however. Carbonation is modest, which is good, because anything sharper would likely give that burnt charcoal taste quite a bite.

O: This is good, though not exactly what I look for in an American Black Ale/Black IPA. Comes down squarely on the roasty, burnt charcoal/earthy side of the ledger, when I prefer a bit more of the chocolatey/piney flavors.

As a fan of this brewery (I wave any time I drive across lake chitaqua but never make it down to Lakewood, I'm always headed to Ellicottville), I knew I would like this. Prejudice follows.

It opens pitch black with decent head, nice foam and little bubbles that keep coming. The aroma is great but I didn't take the warning - extremely roasty malts to come - so i was shocked by the ashen flavor. But pleased. This is all appropriate for what the style read supposed to be.

As you work on the glass you appreciate the balance of over the top roast, hops and malt, all at the same level (about 8.5). It freakin works. Recommended.

12oz bottle. Poured out a dark, dark brown (almost black) color with a one-finger, tan head of foam. It smelled very hoppy with pine and floral notes. There were also sweet notes of chocolate and caramel. It tasted of piney hops with a sharp citrus kick of orange peel and grapefruit. Finished with a roasty chocolate malt taste.

4.75 A: Black color. Two and a half fingers of creamy beige head. Retentions if very good and glass covering lacing is left.

3.5 T: Mild bitterness. Again floral and earthy hops. However, there's a much more potent citrus component to the taste. Roasty with chocolate and caramel. Toasty and biscuit malts.

3.75 D: I'm not a big fan of the style. However, this is a good one and it's mainly due to the bitterness being manageable with the malt profile. Too many times, the bitterness clashes with the dark malts. This one does it right.