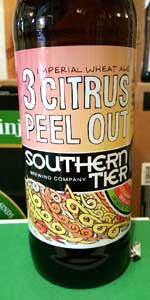 Notes: An Imperial Wheat Ale brewed with blood orange juice, tangerine and grapefruit peels. 3 Citrus Peel Out is the newest in the company’s seasonal Imperial Series. It features an 8.5% ABV, a grain bill consisting of 35% wheat, CTZ & Mosaic hops and a walloping amount of citrus. Over four and a half pounds of tangerine & grapefruit peel per barrel accompany tropical flavors from Mosaic hops and an added boost of blood orange juice during fermentation. This refreshing brew sits around 30 IBU and its nice citrus pith complements the bitterness. Residual sweetness helps accentuate the fruity character and masks the 8.5% ABV well.

Southern Tier founder, Phin DeMink notes; “We encourage craft beer connoisseurs and folks new to craft to enjoy it straight up or served on the rocks with soda & wedge of fresh fruit. We’ve loved it with simple syrup & a shot of our favorite spirit. No matter how you serve it, 3 Citrus Peel Out is the summer refresher you’re looking for.”

I have not reviewed a beer in ages, but this beer forced me to review it because it is truly awful. Normally Southern Tier makes pretty good beers, but this is by far the worst I have ever had from them in the 10+ years I have been drinking their beers. This barely resembles beer, much less a wheat beer. The mouthfeel of this beer is virtually non-existent, and the flavor recalls a shandy or alcopop more than it does actual beer. Southern Tier should be ashamed of putting this beer out, much less charging $13 for a four-pack. If I did not spend the money I did on this beer, it would be a definite drain pour. This beer is atrocious, pure and simple. It looks bad (no head to speak of), tastes bad, smells bad, and has the mouthfeel of a wine cooler.

I noticed in the description of this beer, the brewery's founder suggests people try this beer "served on the rocks, with soda." Really??

Poured from a 12 OZ bottle into a pint glass. The appearance is a clear light gold color with a small white head. The aroma is mild citrus hops. The taste is bitter hops with a mild lemon finish.

Beer poured flat. No head. Small amounts of sparse, tiny bubbles. Very translucent. Odd for a wheat beer. Smells of oranges and grapefruit. Probably the only positive highlight. No lacing. Feels crisp. Lots of citrus obviously. Not a bad flavor but the feel and lack of round carbonation makes this a let down to me.

A little too citrusy for my taste. The fact of it being Imperial makes it a bit strong. Not bad but I have had better from Southern Tier. Waiting for Pumking!