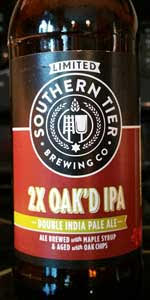 Poured a dark amber with a thin head that dissipated quickly. Faint floral aroma. Tastes of malt, very light oakiness, and a slight hop bitterness on the end. Thin body and light carbonation. An ok beer but not anything to write home about.

Notes via stream of consciousness: Nice looking glass of beer. Clear dark copper colored body beneath a frothy head of yellowed off-white. Very good head retention. Aroma of caramel malt, soft pine, and light oak. The flavor follows. I was expecting more body and malt, and perhaps more hops. It's kind of minty and herbal, perhaps because of a combination between the hops and the wood. I was also expecting more oak, but what's there is adding a nice dryness. Impressive lacing, and the surface is still fully covered, although quite thinly. I'm picking up some fruitiness in the nose now, apple, pear, and berries. It's pleasant. And welcoming, but not bold, which I would think would be important in a "double India pale ale", even if it wasn't just hops. It's just a hint floral as well, or am I getting that because of alcohol? What's the strength here? 8.2% ABV, yep, that's a double or "Imperial" IPA. What else does the label say? It's "...brewed with Maple syrup & aged with oak chips". Well that makes sense, it's just oak, not Bourbon barrels or something; and a lot of double IPAs do come off as being very malty so I can see where the dryness of oak would help. As for the maple syrup, I don't think I'm finding it. It might be there along with the malt and oak but it doesn't stand out to me. So, unfortunately, it seems to have failed on two fronts: lack of hops, and missing a listed ingredient. At least the alcohol doesn't show though! But what we're left with isn't exactly exciting, is it? Nor does it scream IPA. I did just get some orange-like flavor though. Overall, meh, I could take it or leave it. I see it as more of an American strong ale than I do a double IPA.

The beer pours a beautiful golden/amber color with a 1/2" off-white head that fades to lacing. The aroma is decent. It has a well balanced scent of pale and carapils malts, french oak, and piney hops. It's malty with a mild bitterness and a smooth oak character. The taste is decent as well. It's a well brewed beer with loads of character, but it doesn't stand out and great in any one respect. It's a solid IPA with a touch of oak that smooths out the alcohol warmth and the bitterness of the hops. The mouthfeel is fine. It's a full bodied beer with adequate carbonation. This is a very drinkable beer. It's flavorful and well done, but nothing too exciting to me.

Nose has hints of citrus and maple syrup sweetness.

Oak was prevalent with the initial sips. Light pine, citrus, and a light touch of maple melded very nicely together. Minimal bitterness in the finish.

Feel was medium bodied and smooth.

Overall this was an easy drinking enjoyable double IPA.

This closes the book on yet another mini-horizontal as part of the Bottle Backlog eradication here at Chez Woody. This time, it was Southern Tier, to include a revisiting of one of theirs as part of TBT #3 in WBAYDN. Next up will be a LOT of Weyerbacher bottles.

From the bottle: "Limited"; "Ale Brewed with Maple Syrup & Aged with Oak Chips"; "Why the hell not?"

I Pop!ped the cap and commenced a moderate pour, resulting in a finger of dense, foamy, tawny head with very good retention, taking its time in falling. Color was a beautiful Coppery-Brown (SRM = > 17, < 22) with NE-quality clarity. Nose seemed sweet for the style and I could have identified the maple syrup presence even had it not appeared on the label. It was an odd smelling beer, in total, with a woodiness and a pine sap quality to go along with the maple syrup. Mouthfeel was medium, kind of light for the style. The taste was immediately attention-getting! The pine of the hops combined really well with the woodiness of the oak chips to give it a sappy, woody flavor that was underlain by a syrupy sweetness, held in check by the hops and oak chips. Finish was dry, slightly fusel in its heat and it was intriguing that the syrup, which had been very sweet on the nose, seemed to have fermented nicely with the beer's other ingredients to become complimentary, rather than overt. I was very pleasantly surprised by this one.

T - Sweet malt, citrus, maple syrup, wood tannins, some earthy grittiness, and a long lingering piney bitterness on the back end. The wood character is very dominant to the point of dryness. The ABV is well hidden.

O - Glad to have tried this, not something I'd buy again, Southern Tier's other Double IPA's are far better IMO.

A fun take on the style, drinkable enough, worth a try

T/F: Sweet caramel grains... earth and oak. Slight maple syrup presence. The hops come off a bit stale... but then again this has been aged and is also probably past its 'best by'. Earthy... pine... mild citrus. Mild bitterness but the sweetness wins through. Medium bodied... a bit sticky on the tongue.

O: An interesting brew... I'm not sure how I feel about aging IPA's in any fashion, and this kinda reaffirms my hesitance. Not bad and definitely interesting, but not one I'd seek out. Drinks almost like a mild barleywine. Glad I got to try it.

Ah, an aged IPA from southern tier. These folks know how to keep the hops Alive too.

It is pretty deep yellow worth a fabulous, rich aroma. The taste is malty and pungent but not as hoppy as you might think. The after taste is a rich combo of barrel aged goodness, hops and malts.

12oz bottle. Poured out a clear, burgundy color with a small, tan head of foam. It smelled of maple, toffee, vanilla and oak. Sweet maple taste with toffee and hints of vanilla. A mild bitterness.

A: The beer is crystal clear amber in color and has a light amount of visible carbonation. It poured with a half finger high off white head that died down, leaving lacing on the surface, a collar around the edge, and some lacing down the sides of the glass.
S: Light aromas of caramel and pale malts are present in the nose along with notes of piney hops.
T: The taste follows the smell and starts out with some flavors of pale malts with hints of maple syrup and finishes with strong notes of maple syrup and some piney hops, the latter of which lend some bitterness and cancel out any associated sweetness from the maple syrup.
M: It feels medium-bodied and very crisp on the palate and has a moderate amount of carbonation.
O: The addition of maple syrup to this beer definitely lends some complexity to the taste, but it isn't overdone and still tastes first and foremost like an Imperial IPA.

The oak, maple syrup, and hops all played very nicely off of one another. Lots of pine with subtle citrus rind and a nice lingering oaky-ness at the finish. The sweetness was subdued, leaving the wood and hops to shine.

pours a clear, dark cognac-amber with a medium head that poofs. nose; citrus peel, pine, cascade hops, ethanol, & oak. taste; caramel malt, lime zest, oak, pine resin, & ethanol. this beer isn't very mellow or complex and is surprisingly hot for an 8.2%abv beer; ethanol is ever-present (very varnishy). medium carbonation & mouthfeel. this beer does get a little more fragrant and mellow after it warms some. there are plenty of better dipas out there.

Clear orange amber with one finger of bone color head. Rings of lace appear as the level drops.
Smell is sweet malts with a touch of oak.
Taste is sweet bready malts with a pleasant bitterness from the hops.
Mouthfeel is medium with just enough carbonation. Finish is dry and bitter.
Overall a good DIPA from Southern Tier Brewing.

Aroma: Almost sweet, with only a little hint of any hops.

Taste: Here the bitter hops make their debut, with an almost sweet caramel finish. Maybe the maple syrup? A hint of wood comes into the palate, as well, but it’s very subtle, as is the heavier ABV, which is almost unnoticeable.

Overall, a disappointing brew, with the disparate elements not seeming to blend so well.

On tap at Taco Mac in Atlanta

This is a fine looking beer, with a clear dark amber colored body topped by a semi-durable tan head that leaves a partial coat of lacing on the glass.
It smells about equally malty and hoppy.

The flavor is more hoppy, with hints of pine, and rather woody, with more tha a hint of whisky. Boozy, but pleaasantly so, with a hint of toffee. Maple nearly MIA.
Mildly bitter thanks to some sweetness.