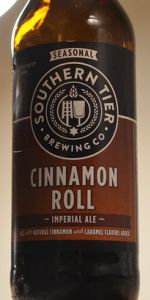 Notes: The scent of our brewery on brew days is irresistible. Akin to the morning’s first brewed batch of perfectly roasted coffee, the aromas envelope you and cause the corners of your lips to curl into the slightest unconscious smile. In this brew, lightly toasted malts with subtly spicy hops blend into cinnamon flavors and creamy lactose sugar. Their coalescence is so uncannily close to fresh baked cinnamon rolls that it was impossible to name this beer anything other than Cinnamon Roll Imperial Ale! Pairs perfectly with eggs benedict at brunch, after dinner, or next to the fire for an unforgettable nightcap.
View: Beers | Place Reviews
Reviews: 75 | Ratings: 238 | Log in to view all ratings and sort
Reviews by KonigObHops:

Got this beer in the bottle at a local craft beer store as a part of their Christmas Ale table.

The beer pours a dark cola color with a thin beige head that dissipates quickly.

The aroma is exactly the same as a Cinnabon Cinamon Bun!

The initial taste is super sweet and full of cinnamon. The middle is full of cinnamon with a bit of caramel. The end is just one big cinnamon bomb, with a hint of vanilla as it warms on the tongue.

The mouthfeel of this beer is relatively crisp.

I am not sure there is any beer in this beer. This beer is exactly what it says it is... The cinnamon is the main ingredient, and the thing tastes just like a Cinnabon cinnamon roll.

Appearance: The body of the beer is a dark brown color and it has a short off-white head. The head fades pretty quickly leaving only a ring.

Aroma: There is an aroma that smells just like red hots or atomic fireballs.

Taste: The beer has a strong cinnamon flavor up front which is followed by a slightly toasted character with a touch of burnt sugar and charcoal. The burnt character gives it a touch of bitterness which also does taste a bit like the caramelized and burnt sugars found on a cinnamon roll. All-in-all the beer tastes much more like a red hot candy or atomic fireball than an actual food item made with real cinnamon.

Mouthfeel: There is just a touch of heat from this beer and just a hint of bitterness. It has a medium body and it is very easy to drink. It finishes wet but never sweet.

Overall: it's an interesting beer that has flavors which approximate the "Cinnamon Roll" namesake, but tastes a lot more like cinnamon candy. If you are a fan on cinnamon candy then this is right up your alley. It has somewhat of a toasted flavor but it really lacks that toasty, bready malt character that can be found in many other beers. I would recommend it because it does have a lot of flavor, but again, it should be noted that it tastes more like red hots.

you have to like this sort of thing, but man oh man this is unique. southern tier has a long and impressive history of making strongly flavored, extremely delicious, and highly desserty beers, and this is a great continuation of that trajectory. it is not inspired by or modeled on a cinnamon roll, it literally is a liquid one, a truly unique and incredible beer right here, whether or not you like it, you have to respect it. it pours a lightly bubbly caramel to deep red color, lazy looking and rich, but the nose is the best feature hands down. the cinnamon is so intense, but its not hot or spicy or anything like that, its natural still though, just cooked, or rather baked and warming, with some toffee, caramel, and caramelized brown sugar notes as well. i even get the buttery pastry bit and the confectioners sugar based glaze or icing on the top, its all there, it makes me hungry, and literally smells exactly like a cinnamon roll, hardly like a beer at all. this all translates to the flavor really well, the sweet desserty cinnamon and the bready roll parts are there for sure, i cant believe how intense this is though, like, even after a few sips it gets to be a lot. its too high quality to be a novelty, but i cant imagine drinking more than half a bottle or so, its that rich and sweet and heavy feeling, amazing to taste and sip on for a little while, but it isnt sustainable. they were smart to go with the little bottles on this one, a bomber, even for two or three dudes, would be way too much, at least i think so. i really enjoyed this though, and have never seen anything like it. really impressive commitment to the cinnamon roll flavor, they absolutely nailed it. this will be a fun one to have around holiday tables this season!

looks brown and dark in the glass, but when held up to the light, is a deep amber color. the head is tan and small, eventually dissipating to a faint cover and solid ring.

Well they nailed the nose on this one, as ST often does with their dessert beers. smells exactly like fresh cinnamon rolls, minus the heat.

taste is loads of cinnamon, but it's not harsh, bitter, or hot, as some other cinnamon beers tend to be. This palate is enjoying this.

mouth is close to full, cinnamon and slightly sweet on the finish.

overall, an enjoyable beer to sip over an evening. 8.3abv is quite well hidden. I doubt i could drink anything else tonight, and close to the end, I was beginning to tire of the cinnamon, so perhaps a 12oz would have been better.

From the bottle, it pours a dark ruby amber with a modest head that soon diminishes to a nice ring. Tons of cinnamon in the nose...and mouth. Malty otherwise with hints of brown sugar. Personally, I think the cinnamon is overwhelming the other flavors, just beware of it and you will not be unhappy.

On tap at Morris Tap and Grill in Randolph. Pours a tawny ruddy hue with moderate frothing. Assertive aroma replete with hints of cinnamon and clove. Similar overall flavor profile.

Poured a brown body with two-finger head that quickly died. Overpowering cinnamon aroma with some spiciness and bread as well. Pretty much a liquid cinnamon roll; cinnamon spice is strong and the beer borders on cloying with the sugary sweetness pretty strong and beer has a fuller, bready body with a slightly sticky and thick finish.

L: Poured from a bottle to a pint glass. Had a dark, mahogany brown color and a thick, opaque consistency. There was a quarter inch of foamy, off white, fairly long-lasting head. Not much lacing to speak of.

T: Tasted of a bit of malt (not overly present), a ton of cinnamon (always present), some lactose (mostly in the finish), a little dark fruit (raisins), and a tinge of caramel as well. You can call this a one-note flavor - it kind of is - but it's still tasty. That being said, the other ingredients make good companions to it. Tasty stuff.

F: A solid amount of carbonation with a sharp finish. Medium-bodied.

O: A solidly made, unusual beer. Definitely worth a look.

Bouquet:
Like walking past a Cinnabon bakery. Warm cinnamon, sweet caramel and cream, and an almost illusory presence of vanilla.

Taste:
Cinnamon comes searing to the top like a fireball candy. What follows is sticky sweet caramel, hints of maple, vanilla, and cloves.

Overall:
At first the cinnamon was positively overwhelming, so I let the rest of the 4-pack age for 3 months. Aging it mellowed out that burning cinnamon and allowed the backstage elements to come forward. I suggest you do the same for optimal enjoyment.

Pours clear, dark brown in color with 1/3 inch head. A gooey cinnamon treat in a glass...You get all of it..Big cinnamon, sweet roll and amazing glaze..Southern Tier makes excellent dessert beers. This is up there with their best...Certainly one of the best smelling beers I have had...If you like cinnamon rolls, this one delivers.

Poured from a tall bottle into a Dogfish Head tulip

T.F: Cloying and sweet. Kind of nauseating... strong cinnamon. Apple, spice, and lactose/sweet. Did I mention that it's sweet? Awful sweet... and nearly undrinkable. Medium bodied... sticky on the tongue. More cinnamon (complete with cinnamon belches) at the finish.

O: I'd rate this lower, but I'm guessing this is what they were going for. I found this to be undrinkable (and the last 1/3 of the pour wound up in the drain). If you like super sweet things with cinnamon this might be for you. As for me... never again.