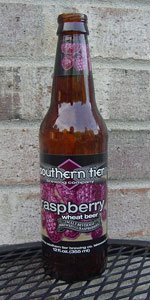 Pours a nice crisp medium golden colour with a smallish head that quickly dissolves into a non-sticky thin lace.

The aroma has some grain/wheat characteristics but is dominated by a healthy although non-overpowering dose of sweet and semi-tart raspberry.

The flavour is more of the same but with a touch more boldness to it. Raspberry is still in the mix and the dominant flavour but it's tartness blends nicely with a sweeter juiciness that is more subtle in the aroma. The grain and wheat provide for more of a bread like feel here as well. Mouthfeel is light bodied and very crisp and refreshing.

This is a nice wheat ale with a decent blend of fruit flavour in it. I don't know that I could drink this often, but one or two here and there would suit me just fine, especially in the warmer months. Pretty good stuff overall.

pours out an almost perfectly clear straw yellow colour with some big bubbles sprouting a marginal, and quickly receding head. filtered i see...and no lace. aroma of raspberries and that's about all...i get little pale malt and no wheat. the taste is of tart raspberries, but the bottom falls out after that. it has an unpleasant astrigency and little malt character to prop things up a bit. there is some bitterness present, but without any malt sweetness to balance it seems out of place. weak bodied. bleh mouthfeel. drinkability suffers because it just seems so stripped of any defineable characteristics.

overall i'm pretty disappointed. my first southern tier sampled is a dud. oh well...i know the next one up will be better.

A newer release from ST thats starting to show up around Buffalo on tap I had this yesterday at Mammoser's here in Hamburg.Pours a dul lighter golden with quite a thin head,toasty wheat malt and fresh raspberry puree are pretty much on an even keel (spelling?) in the nose they meld pretty well.Refreshing would be a word to describe this brew it really should be a summer seasonal lightly tart from the raspberry with a dryish cracked what malt base again they go in harmony with each other.Not a style I go for much but its new and ST is local I gave it a try and its not half bad.

Very light gold with a snow-white thin and sticky layer of foam.

Fresh, ripe raspberry aroma with just a hint of wheat behind it. Not overpowering, but "just right".

Smooth, light body has an almost sourdough flavor to it, with mild raspberry as an afterthought. Not a massively fruit-laden beer, rather a good, easy drinker with a hint of berries. Good balance between sweet and dry as well. Low bitterness.

This would make a good "crossover" beer for macro drinkers... tasty yet light, and no blast of hops to scare them away.

12oz standard brown bottle capped from the sampler 12 pack. Must be a sale on raspberries as they include the porter as well in this pack.

Pours out a light yellow with a good size white head that seems to stay put. Smell is well, raspberry. Sweet overall with a tiny splash of something malty.

Taste is very light overall. The raspberry flavors are too sweet for me. It continues through to the aftertaste. I really don't get much else. This is just an average beer for me.

I would much prefer they just drop these raspberries, up the malt and make a true Wheat or White ale.

Well, I guess not everyone digs Amarillo hops in the American wheat so it must have been time to cater attempt their first fruit beer with this Raspberry Wheat. Appears an extremly pale golden haze with bright white head forming nice and thick has a creamy appearance to it with ample even specks of lace dispersed with each sip. Aroma tart raspberry action of course sharp wheat tone mild spiciness with a touch of citrus no real hop note for me I'm just catching raspberry. Flavor some musty wheat sharpness with raspberry mild tartness comes light and airy at first then the raspberries take over and really stick around in the finish kinda double edge b/c it does grow on you but it also gets old quick. Mouthfeel is spritzy in the carbonation department with a light bodied ready for the summer definite attraction the palate sticks around and finishes dry. Drinkability is okay but not what I'm looking for especially from one of my all time breweries better than most syrupy examples but still just okay.

L) The brew poured pretty chunky, and was not old enough to warrant such a defect. Was pleasantly hazy aside from that, with a lovely pink hue.

S) The smell was fantastic honestly, along the lines of a fruited lambic, but less strong and assertive. Very raspberry-centric. Incredibly inviting!

T) The taste was solid, but not as good as the nose. Still really raspberry forward, with a pleasant acidity, perfect amount of sweetness, and a crisp refreshing nature.

F) The brew had a medium-high carbonation which was acceptable, and a light feel for how chunky it poured.

O) Honestly, I'd recommend it to any fruited wheat lovers. It is better than people are saying, but man I wish it didn't pour chunky.

Appearance - looks like your average macro, not a wheat beer by most standards. Standard yellow/gold, a thin pithy head. Some better than average lacing though despite no retention from the cap.

Aroma - raspberry jello. No beer elements but a pleasant fruity aroma, about what you should expect.

Taste - interesting flavors, not in the best way. There is an undertow of a tart, bitter, or sour (not sure which best describes it) flavor. On top of it rides a modest, flavorful raspberry. I half-expected alcopop, it's far from that. Only thing is, with that odd sour/bitter foundation, it might could use a little more sweetness. You won't often hear that for a fruit beer. It's a medicinal type of flavor and for as impressed as I am with the delicate balance of the fruit, it is ruined by whatever that other flavor is. The aftertaste does not invite another sip but I'm finishing this one.

Mouthfeel - plenty of bubbles. Thin, watery, no smoothness which a wheat beer ought to have some measure of.

Drinkability - a nice smelling beer, but no follow through. Pass.

Pours a lightly hazed gold ale in the wheat glass.

Fairly light on the palate, biscuity wheat malts light hop herbalness but the unmalted wheat and berry tartness gang up to dry up the drink in the finish.

Nice dry refreshing drink for a summer patio but seeing how there is no berry color in the brew I suspect essence was used instead of raw fruit and the whole formula dashed together for a quick summer seasonal. Not bad but certainly not ST's best effort.

Smell: the raspberry tone is extremely pleasant on the nose. Some grassiness is also detectable.

Taste: wheat, grass, green grapes, and a solid but not overwhelming raspberry flavor. Just a whisper of bitterness here. Not fake tasting like some other fruit beers.

Drinkability: not as refreshing as I would like since there is a bit of dryness. Decent flavor, and I actually found this enjoyable enough to have two in one session. Worth a try.

A - Really light crystal clear yellow in color with a thin white head that stays for a while.

S - Tons of raspberry, really tons of it. This has a stronger fruit smell than most lambics. Really good smell. I want to keep smelling it.

T - It tastes only like raspberry's. This is a thinner version of the raspberry porter. They taste the same except this is just thinner. It's not bad but there's a little to much raspberry.

D - This beer is OK. It's nothing special. If you like really fruity lambics it's good.