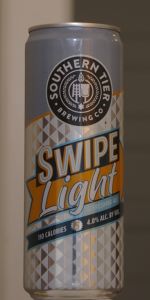 Notes: Clean, with subtle yet bright Citra and Mosaic hop character, and a touch of malt sweetness. A craft light with a focus on flavor. Complex and refined and only 110 calories.

Well, it's a light beer. Don't expect much.

This smells like lemony and grapefruit hops, biscuity malt, and some light bitterness.

This is extremely light, but that is by design. It works well for me, with that very light juicy and slightly bitter hop character. It works well in the spaces between - there's not a lot there, but there's no off flavors, and it's very smooth.

This is light bodied, and extremely drinkable, with a crisp finish.

This does well at what it's trying to do, and that should be commended.

Rated by Chuck71 from New Jersey

3.75/5  rDev +8.4%
look: 3.75 | smell: 3.75 | taste: 3.75 | feel: 3.75 | overall: 3.75
southern tier is doing it too huh? another brewery getting on the low cal bandwagon. i guess a response to white claw was needed, but im not sure this is the answer. this is a solid beer though for the summer, not as light and stripped of character as a lot of them have been so far, and nice and refreshing, i just wish my can was a little colder when i had it. i have never seen these tall skinny cans from southern tier before, maybe trying to differentiate this one, or make it look more like a while claw, whatever. the citra and mosaic are obvious in this, and that might be all for the hops, not going to call the combo boring because its so classic now, but i will say this isnt the most interesting hoppy beer in the game, not by a long shot. real light on the malt, almost pils-esque, maybe a little less crackery, more blonde style, but the hops do have some bitterness which is nice, and the carbonation being so high makes it very refreshing. i think this just used to be called a session ipa, but now we call it health conscious beer, lame. a bit of floral honey at the end, but quite clean. simple but good, id take this over many of the others ive had trying to do the same thing. a total pounder.
Aug 20, 2019

Reviewed by Nephilium from Ohio

The taste is very basic. It doesn't have any of that vile aftertaste the bmc crowd have. It's lightly dry. Any bitterness is just a suggestion. Everything about this beer is light, which is what it's aiming for. But a beer still has to be enjoyable to be good, and this is pretty bland.

Mouth is only a touch below medium. Finish dries out the mouth a little, making it not very refreshing.

Overall, a below average beer for me. Nothing much going for it, but no bad flavors either. One of a thousand lawnmower beers, but others are better.

Appearance: The body is light gold with good clarity. It has a medium sized fluffy white head with good retention.

Aroma: There is a light catty aroma, and a bit of what smells like ancho chilis.

Taste: There is a light bit of herbal flavor which tastes like water with a bay leaf inside it.

Overall: There isn't much to this beer when it comes to body or flavor. There are many other comparable session beers that have more flavor. I wouldn't drink it again and I wouldn't recommend it.

Notes via stream of consciousness: So what do we have here? A "light" craft brew? 110 calories isn't bad. How much is a Bud Light? Ahhh, the same, although Bud Light is one of the higher calorie light beers. So, OK, let's see. It's poured a clear golden body. I can't exactly see my fingerprints through the glass but it's clear enough. The head is a fluffy cap of white. Nothing special there but it's not bad. The aroma is somewhat hoppy which is nice. It's citrusy and lightly herbal, maybe with some lemon to it. A touch of malt comes through as well. On to the flavor... well there's some hops there too! Some grainy and lightly sweetish malt remains, and that lemon note is there. I'd say it's a touch grassy in the finish as well. It's not bitter, as might be expected, but it's balanced as the malt isn't that sweet. It's pretty good, basic, but good. Why haven't the big brewers started making hoppy light beers? Certainly there's a market for that as the less-than-staunch followers of mainstream beers are at least trying out craft brews. Personally I'd like more hops, but with that in mind I can see why Southern Tier has kept them restrained. In the mouth it's light bodied but leaning towards light-medium, and it's gently crisp and then smooth across the tongue. Overall it's pretty decent.
Review #6,559

T/F: Light... a bit on the watery side, but still some citrusy hop flavor and a very pale malt bill. Thin bodied... well carbonated. Easy drinking.

O: For a 'light' beer with 110 calories this is actually pretty flavorful. Nothing to seek out, but if you're looking to cut some carbs and still drink beer this is a way better option than most of the light beer fare.