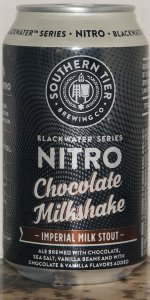 Price: $3.99 at Quarry Wine and Spirits in Baltimore

Appearance: 5 - what can you say? Nitro beers are hotties. The video shows it all. I'm left with a beautiful frothy tan head that looks like it'll never move.

Nose: 5 - like I mixed a chocolate milk with the Hershey's syrup.

Mouth: 5 - extremely thick and frothy. Nitro is like magic.

Overall: 5 - won't win any awards, but just plain fun to drink. I should buy a few sixers.

Southern Tier has created a rich and creamy chocolate milkshake with 10 percent ABV. This beer is smooth and deceptively delicious. It smells like milk chocolate - Willy Wonka style. This is a sweet dessert beer and I am drinking this one in front of a fire reminiscing about all the chocolate from my youth. Give it a try - it's definitely worth it!

Beer poured black with a beautiful tan head that has some great hang time.

Taste is chocolate and lactose forward with a nice touch of high concentrate cocoa to help balance some of the sweetness.

Mouthfeel is light bodied and not overly smooth.

Not unlike a chocolate milkshake, with a bit more vanilla, a hint of booze.

Mouthfeel velvety, but ultimately feels quite light and undercarbonated; trading some front end smoothness for backbone with the nitro

Canned on 7/31/19. 12oz can poured into a tulip. Pours almost black with a creamy khaki head that falls leaving great retention and nice lacing. The aromas have some vanilla leading the way along with some caramel. Subtle hints of cocoa and chocolate. Malts are there. The flavors basically follow the nose. More vanilla and caramel. Some coconut in the mix. The sea salt definitely comes through and accentuates everything that's going on. The chocolate does its thing. There's a sweetness to this one, but it's definitely not cloying or over the top. Nice malt backbone. It finishes with a subtle warmth, but it's not hot at all. Mouthfeel is on the lighter side of full-bodied with low carbonation. It's creamy and velvety while remaining light and slightly "watery". It's basically what you would expect from a nitro beer, more or less. It's smooth.

This is a nice "dessert beer". Nice aromas and flavors. It's basically what you would expect from a Southern Tier stout. It might not be my new personal favorite stout from them, but it's still good stuff.

On tap at Oak and Stone. After a Founders stout, this feels like the chocolate and vanilla are trying to hide the stoutness of the bier. Still, with the nitro edge, it does feel like a milkshake - with a shot of booze.

12oz nitro can. Poured out an opaque, jet-black color with a small, khaki-colored head of foam. It smelled of chocolate milk, vanilla and rich toffee. Sweet chocolate and vanilla. Really tastes like a milkshake.

Poured from a can into a snifter glass. Resulted in about 2 fingers of thick creamy head after the nitro settled. Nearly black color beneath the head that stuck around for the entire drink. Head also has strong legs after every sip. Smells like cocoa powder/chocolate milkshake. Tastes basically the same for a mildly boozy, intense chocolate milkshake flavor. End is maybe a bit malty. Somehow not excessively sweet. Super creamy nitro feel. Amazing package I need to find more of.

Presentation: 12 oz. can with the caning date printed on the bottom. Served in a Willi Becher glass.

Appearance: The dense, thick, one and a half finger, tan colored head stays around for a very long time and leaves a web of lacing that covers the entire glass. It's a deep, black color with some reddish brown showing up on the edges when held up to light.

Smell: There's a rich, milk chocolate sweetness, vanilla and brown sugar with some darker, roasted notes of cocoa powder and roasted malt in the background.

Taste: It's mostly sweet at first with a strong milk chocolate and vanilla flavor. The pure cocoa and roasted malt bitterness is subdued and only comes though in the aftertaste.

Mouthfeel: It's a perfectly smooth and creamy nitro texture that's fantastic. There's some body and heft but it's mostly on the lighter side which is great. It makes it easy to drink and keeps it from getting cloying.

Overall: A rich, creamy and decadent beer that's a perfect pairing for deserts or just to have as a desert all by itself. The sweetness is never overwhelming or cloying and the nitro lightness and smoothness make it deceptively easy to drink for a beer that clocks in at 10% ABV.

Pours black with the massive cascading beige head that you expect from a nitro beer, amazing lacing. Smells and tastes of chocolate, fudge, vanilla, cocoa and roasted malts. On the light side of full bodied, creamy mouth feel, light carbonation. Excellent dessert beer.

A - Pitch black pour with a two fingered layer of creamy head on top. The separation between foam and beer is a laser sharp line.

S - Creamy chocolate and cocoa aroma with a little bit of vanilla.

T - Creamy cocoa and vanilla from start to finish with some saltiness. Some booziness does poke through.

M - Velvety and creamy texture on the palate.

O - I love the Blackwater Series and this one doesn't disappoint.

Pours opaque, dark brown in color with 1/3 inch head. Taste is chocolate milk shake, milk and dark chocolate. Medium-heavy bodied, low carbonation, sweet and slightly roasty. Makes for a good dessert beer. I prefer other Black Water series beers as this is a bit one note, but still a good beer by the dessert beer kings.

Nitro pour yields a two finger head after it settles atop the dark brown liquid. The nose has mild but definite notes of chocolate. The flavor is straight up chocolate. The mouthfeel is smooth and creamy.

There is only a slight hint of alcohol at the very end of the finish. At 10% this offering is so drinkable that it is eminently dangerous!

The one downside of this offering is the price. Basically, this is a nitro version of Choklat. The nitro does give it a nice milkshake-like consistency, but I'm not sure that I'm willing to pay the significant price increase over the standard Choklat just for that alone.

A: Pours a near pitch black color with 2 fingers of nitro head that slowly fades down to a nice cap that leaves good lacing

S: Milk chocolate, vanilla, roasted malt, and caramel. Definitely on the sweet side

O: Another solid addition to the black water and nitro series. Definitely sweet like most of the others and more of a dessert beer, but quite drinkable nonetheless. Worth checking out

Upon tasting, it's all about the milk chocolate with a little warmth from the 10.0abv.

Overall, a decent pastry Stout for those of us with a sweet tooth.

Good for what the name tells you! Sweet sweet sweet! Imagine drinking Hershey's chocolate syrup, and there ya go! Definitely a dessert offering. Industry Public House in Robinson. The ending flavor is off.

Notes via stream of consciousness: Wow! Here's another great dessert beer from Southern Tier, and I'm saying that just based on the drop I licked off of the top of the can after I poured it. They seem to be knocking it out of the park with each new one they put out. OK, let's look at the beer. It's got a great creamy head of khaki foam over an opaque black body. The aroma is intensely chocolatey. It's like warm melted chocolate or a cup of hot cocoa. I don't know that it's real, that seems highly unlikely, but let's see what the label says... ahh, interesting, it says "ale brewed with chocolate, sea salt, vanilla beans and with chocolate and vanilla flavors added". So it's at least half real stuff, but to be honest, I wouldn't care if it was all flavorings as long as it was still as good as it is. On to the flavor... yeah, wow, that's super rich. It's loaded with chocolate and vanilla. Interestingly, it's not too sweet. Don't let me mislead you though, this is a dessert beer! It's sweet. But it's not syrupy. I also get the salt, although it took a few sips to really notice it, and I think that's part of the reason that it's not too sweet. Unfortunately that's about it; it's not as complex as some of their other beers. Still, it's great for what it is, and it can stand on its own as a dessert, or you could easily use it as an ingredient in something. A small scoop of vanilla ice ream dropped in here would make a great float. OK, let's finish up. The nitro carbonation works great, and it's medium leaning towards full in body and remarkably smooth and velvety. The lacing could be better, but the head retention is excellent. Overall, all around, this is a great dessert beer. I'd drink it at another time, no one's ever said you can't have dessert for lunch, but i wouldn't have it out at the pub with the lads. Worth trying.

Pours straight up chocolate milk out of the can. As the head sets, the color turns to near pitch black with 2 fingers of creamy khaki head. As with most nitro beers, the lacing is realer than yo momma.

The flavor is boozier than expected, with plenty of chocolate syrup and vanilla. There's a faint touch of coffee with an even fainter touch of salted peanuts.

The feel is typical of a nitro stout: Creamy and delicately smooth. The alcohol is unquestionably present, however. Perhaps a bit thicker and chewier than expected. Like a bad Tinder date.

Overall, a great milk stout that comes exactly as advertised. It's very, very sweet but (shockingly) only toes the line of cloying. Given the brewer, I expected to require insulin shots after drinking this but thankfully that won't be necessary. The flavor is refreshingly complex for the style and while the alcohol is present throughout, it doesn't overpower the beer.

Pours out looking like chocolate milk, as the foam rises it turns a nice solid black color. The head is creamy. The smell of the beer is of soft chocolate. The taste is sweet upfront with a nice chocolate after taste. Creamy smooth rich feel. Overall very nice brew!!