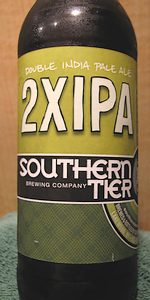 Poured from a 12oz bottle into a Bruery Tulip.

A: Pours a crystal clear pale copper colour. 2 fingers of fluffy white head that dissapates quickly leaving some lacing behind.

T: Citrus comes out up front and then the piney notes followed buy some toasty bread notes. Finishes slightly bitter.

Overall this a solid DIPA. Good value and good flavor. Very drinkable at 8% abv. A repeat purchase for sure.

I have been doing a number of brewery-oriented horizontals as a part of the ongoing eradication of The Bottle Backlog here at Chez Woody & by some circumstance, I have a number of Southern Tier's beers to add to my list. I have been working in fits & starts on this horizontal, having been sidelined by a massive head cold & then by my acquisition of an SN Beer Camp Around the World 12-pack. I now make a triumphal return & continue with this beer!

From the bottle: "Brewed with 4 varieties of Hops and 3 Types of Malts".

I Pop!ped the cap & performed a gentle pour into the awaiting glass as is my wont, following my New Year's resolution to stop inverting my bottles. Once sufficiently decanted, a vigorous in-glass swirl raised just under two fingers of soapy, foamy, tawny head with modest retention. Color was Golden-Amber (SRM = > 5, < 7) with NE-quality clarity, prompting a return visit from The Gelt Gang of Midas, Croesus & Mammon, all of whom agreed with my assessment. Nose was grapefruit-citrusy, bitingly bitter & I was ready to go. I know that AIPAs & DIPAs are taking a knock for their inherent bitterness, hence the wave of tropical fruit-flavored AIPAs & DIPAs, but man, I swing on the bitterness. I am a self-avowed, self-described hophead & nothing sends me like bitter, lupulin-driven bitterness! Mouthfeel was medium, a bit light for the style, but I am not complaining. The bitterness of this one was eye-watering, or maybe it was tears of joy. Man, you had better really dig grapefruit & I ain't just talking juice, baby! This was rind, pith, juice, seeds, the whole meghillah with nothing left to go into the compost pile. Man, I was sweating like a white man asking for directions at a Black Panther meeting, dig? Was it the hops? The heat & humidity? My jonesing hops monkey on my back? Some raucous combination thereof? Unknown, but man, I was starting to fly! Dig, baby? This wasn't some groovy trip like that 2X SMaSH vibe, this was tie off, jam in, unleash & get it on time. If you dig this scene, you are one of us. Non-hopheads need not apply. Phew. The unrelenting nature of the grapefruit bitterness had me rocking in my chair. My eyes were as glazed as this morning's donut. Whew. I think that I may have been on the nod. Where has the time gone? Where has all of that beer gone? The glass is now half-empty with no memory of its consumption. My sinuses are wide open, though, & it kind of hurts to breathe. Maybe I'll stop for a while. Breathing, I mean. 9 out of 10 doctors agree that not breathing is not good, but that is why I go to #10. Dr. Scripts, as I like to call him, is my kind of sawbones. He doesn't ask too many of the wrong Qs & just enough of the right ones to write me a script & get me right. Right? Finish left me finished. Man, that was dry. Dry as the Zephyr winds blowing across the Sahara, dig? Man, we gotta take this trip again, man. What are the ChANces of your putting it in a CAN next time?

Today is MLK Day, M, 15 Jan 2018 & ChANces are excellent, apparently! They not only CANned this bad boy, but they put it in a 16-fl. oz. pint cylinder! Yay! Hooray for The CANQuest (tm) as it scores CANother triumph!

"Why, indeed?!?" was the question that I was asking myself as I Crack!ed this bad boy open. An inverted Glug was out of the question since it was simply too much liquid to want to deal with & plus, I have weaned myself off of inverted Glugs unless they are really CANpelling. I kind of sat back & allowed it to do its thing after I had it deCANted into the awaiting glass as it formed a cap of dense, foamy, French Vanilla-colored head with great retention of its own volition. Color was a gorgeous Amber (SRM = > 7, < 9) with NE-quality clarity. Nose had a beautifully cool minty-pine quality along with a mild earthiness & a bready maltiness. If I did not know otherwise, I would have sworn that this was another fresh-hop AIPA! Mouthfeel was full & creamy & I simply allowed it to roll around on my tongue. The taste remained cool, minty, pine-y and very fresh tasting. It had a flavor like fresh whole-cone hops when rolled in the palms of your hands. Very resinous, sticky and unquestionably hoppy. Mmmm. On the other hand, it was not very bitter, which is something that I have been on my high dudgeon about lately. Ah, but it is a DIPA & therefore bitterness is not as much of a CANcern since an ample amount of hops must be used to CANterbalance what might otherwise be an undrinkable level of IBUs. The malts were, indeed, bready & slightly sweet, but it added up to an unbeatable CANbination. The inherent ABV was well-hidden & I suddenly found myself a quarter of the way through it without a thought or a backwards glance. Ooops! Finish was dry, minty, but only marginally bitter. It was fine by me, but it bears CANsideration if you really want bittering hops.

For me: CAN wins, but either one would be acceptable. I just have a CAN bias.

A - Slightly hazy yellow orange beer with short tight head that fades quickly to a film and extensive lacing.

T - Stronger honey couples with a hint of lemon and a certain medicinal element. Another IPA that reminds me of a honey lemon throat lozenge, not that that is a bad thing. This is a pretty delicious brew. Middle comes with some bitterness, and that runs through the close. At the end, the honey comes back, offering a touch of sweetness.

M - Mild carbonation means the bitterness and hop oils hang around. Not a sign of the serious alcohol, though, which is a significant accomplishment.

O - This is a solid double IPA, with bright flavors. An added benefit is this quite drinkable for a DIPA. I will pick this one up again, I suspect.

Pours a beautiful clear yellow to amber with a fluffy white head that laces very well. Smells of pine and citrus with a hint of sweet and simple crackery malt and even a touch of honey. Smells like my kind of DIPA. Taste follows with a bit more sweetness than expected l, making this an almost perfectly balanced double IPA. Lots of pine, and a lot of the sweet flavor seemingly coming from the citrus of the hops. As I've said, exceptionally well balanced, medium carbonation, and would never have guessed it weighs in at 8.2%. Overall, this is an outstanding DIPA, and would gladly have it as a constant in my fridge. Cheers!

Pours a hazy deep gold producing 2 fingers of off-white, frothy & variously bubbled, somewhat lasting head that leaves a nice pasty wash of frost like lace. Aroma is heavenly tropical, floral & citrus hoppy backed by caramel malt & with a thin vanilla like hint & faint butterscotch. Taste is juicy tropical fruit & citrus (tangerine & Clementine) hops backed by a wet caramel sweetness. Finishes tropical/caramel sweet with citrus & a hint of pine with a low level hop bite & bitterness that intensifies & lingers for a while in the aftertaste. Mouthfeel is medium-heavy bodied with moderate carbonation, wet & juicy, mouth filling with a mid-sip prickle that last beyond the swallow. GREAT.

A - Pours very light, almost like apple juice. Not too much of a head but leaves very nice lacing.

S - Not all that pungent for a DIPA, some citrusy hops but not much else.

T - Somewhat sweet. Bitter and hoppy up front, the taste is far different than the scent would reveal. Earthy and piney hops, not too much fruit here, but there is some.

M - Far lighter feeling than any DIPA I've ever tried. It seems that they just didn't want to make as rich and thick a beer as other brewers, and luckily the price is reflective of this.

D - Very drinkable and tasty beer. I like this amped up IPA for a nice price.

This is one of my favorite beers on the market. Delicious double IPA pours a golden yellow. Smells of hops and citrus. Tastes pop, hoppy citrus caramel flavor. Very smooth to the mouth. Overall a really good beer that I would tell anyone to drink. I would also try southern tiers 422 pale ale. Very good beer from a good brewery.

A: Clear filtered orange gold with only one or two rising bubbles- so almost no carbonation. Almost no head just a little fine yellowish foam that hangs around. Nice lacing.

O: I think this is probably old, based on the plaster scene and linseed oil presence in the taste. Love the bottle, have been really looking forward to this one. A little disappointed, but its still a great beer, most certainly would be better fresh.

Smell: Tart grapefruit, floral/spicy hops, tea and doughy bread. A little mild, and very English, other than the grapefruit.

Taste: Nice, grapefruity hops over a ramped up malt body of bread, tea and caramel. Finish is just somewhat bitter, and actually more floral and spicy than truly bitter.

Feel: Fairly light body for the style, but pretty oily as well. Carbonation is subdued. Finish is dry, as expected regardless of whether I am treating this as a Double IPA or some kind of ramped up English Ale. Crisp and refreshing. Odd for an over 8% beer.

Overall: This is not really what I think of as DIPA. This is simply too English and malty, but with some grapefruity American hops thrown in for good measure. So I would consider this more of a American-style Double ESB, which isn't a style. The name 2XIPA is simply misleading. That's a lot of blathering just to say that this was not what I expected. However, it's very tasty and unique, which is more important than style distinctions.