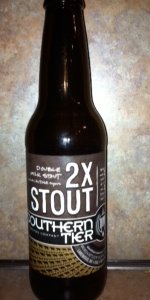 Poured from a 12 oz. bottle into a tulip pint glass

The beer pours a deep brown/nearly black with about two fingers worth of dense tan head. The head fades relatively quickly leaving behind very little lacing.

The beer smells moderately roasty and slightly sweet, The aroma seems to fit into a nice middle ground of not being too mild, but also not being overpowering

The taste, like the aroma, is moderately roasty and slightly sweet. The sweetness seems to come more from a heavy handed use of crystal malts than from the lactose. The body is a little thinner than I would expect for the style.

Overall, this is a decent beer that is fairly easy to drink, but not something that I would seek out. I prefer my Milk/Sweet Stouts to be a bit fuller in body, and a have a little more sweetness from the lactose.

Flavor is different from the aroma ... not so much chocolate, more overall bitterness. It's kind of tasty, but not quite right to me.

It's a decent stout, but not a great one.

Maybe I've become a curmudgeon in my dotage.
This one's all right-- wouldn't walk a mile for it... wouldn't walk a half mile for it.
I see 2X on the label- but it's not a 2X stout. I'd call this one a mild stout.
It's got all the character of a stout but there's nothing truly unique,
truly eye opening. There's no startling perspective on the brewing world-- of stouts in this libation.
Looks OK, tastes OK-- (look up Stout) and there you have it.
I'm not feeling cheated by purchasing it-- it's just nothing I'd pick up a megaphone for to shout
out on the rooftop over alerting the beer drinking multitudes.

Southern Tier 2X Stout has a medium, cream-colored head, a dark brown, almost black, appearance, and just a little bit of lacing left behind. The aroma is a wonderful mix of milk/cream, dark-roasted malt, and sweet bread crust. Taste is the same, with low bitterness, but high acidity. Mouthfeel is heavy and slick, and Southern Tier 2X Stout finishes wet and sip-able.

Was a very weak stout way two thin for a double milk......I didn't care much for it

A- Dark black body, one finger offwhite head with good retention time, a bit of lacing. Looks darker than expected for a milk stout.

S- Mild cocoa, milk chocolate. Like a hot chocolate that's cooled down considerably. A bit of dark chocolate, lactose, espresso. Smells solid, but nothing too intense.

F- Silky smooth milk chocolate, cocoa, coffee, lactose. Smooth and no off flavours. Lots of different "dark" flavours on the palate, solid but nothing that stands out. It's certainly sweet.

M- Medium body, sticky and slick. Leaves a milk licorice and milk chocolate finish on the palate. Not difficult to drink.

O- On the sweeter side, but it has all the "dark malt" flavours that you could want. A bit bitter as well. Not the greatest, but you could do a lot worse.

Appearance: Pours a very dark brown color. The head is a finger high and tan in shade. Steady to fade away, its retention isn't the best. Tiny bits of lacing stick to the glass. (3.5)

Smell: Somewhat indistinct. While I pick up some lactose notes, they're pretty light - as are the chocolate and roast notes. There are some additional fruit esters that add a little bit to it, if nothing else. This one isn't swaying me one way or the other. (3)

Taste: This one tastes odd, kind of like how I remembered. It starts off with some lactose sweetness, before transitioning into an underwhelming mixture of piny hops, caramel, and generic charred bitterness. No chocolate, no coffee, no roasted bread, just a whole bunch of char. And as it warms up, the generic char becomes worse. This is one of the few stouts that (to me) tastes like it has too much crystal malt. As we know, my opinion of crystal malt is that I don't like it too much in an IPA or pale ale, but in a stout/porter/brown ale, I'm perfectly fine with it. Here, though, it's annoying. And frankly, ruins the beer. (2.25)

Mouthfeel: The feel manages to be both sweet AND thin - by the way, that's not a good combo. A touch of astringency and a slightly larger touch of bitterness helps it go down somewhat easily, if nothing else. Carbonation is moderate to slightly low. (2.75)

Overall: I still don't like this one very much. It simply has too much burnished caramel and not enough roast. All in all, a rare blemish on Southern Tier's otherwise rock-solid regular lineup. (2.5)

Aroma wise, 2x Stout delivers a moderate roast character backed by unsweetened cocoa powder. Nothing overwhelms the other and it smells pretty good, however, I wish the aroma was more prominent.

The beer pours out jet black, barley any light gets through this one, just a tad brown around the edges. It's topped by a light mocha head made of late bubbles with good lacing. The head dropped back down into the beer fairly quickly though.

2x Stout's flavor rocked my world. At first sip I got a bit of chocolate with some sweetness to it. That was followed by a nice roast that pulled into the tail end that was just slightly tannic.

It's a full bodied beer with carbonation more on the low side, with a surprisingly slightly dry finish which I didn't expect considering it's a milk stout. Drinkability was alright considering it's 7.5% ABV. Overall, I really liked this beer and compared to other milk stouts, I'd wager this was one of the better ones that I've had.

A - Great retention and lace on a medium khaki head. Black with dark cola highlights.

S - Fairly one dimensional but still pleasant with a deep roasted grains character and a touch of caramel.

O - A very nice milk stout, one of the better examples of the style imho.

Reviewing this again after having on nitro.

Appearance: Poured a deep brown into a standard pint glass with three fingers of beige head that stick around for a while. As the head fades it lines the glass with delicate brown lacing.

Smell: Chocolate, coffee and a bit of lactose. A bit of sweetness for sure but not a ton in the nose.

Taste: Silky smooth chocolate with more coffee than I got from the aroma. This is a very tasty stout with nice sweetness and little bitterness.

Mouthfeel: Medium bodied but goes down smoothly and dangerously easy at 7.5%. Very creamy and a stout I could drink for a while.

Overall: A very solid offering and far better on nitro-tap. Definitely worth seeking out and a solid all-around beer from Southern Tier.

This was far too sweet for me, but pretty typical of the style. Not a big fan of Milk Stouts. This one was had too thin of a mouthfeel and the aroma was almost non existent.