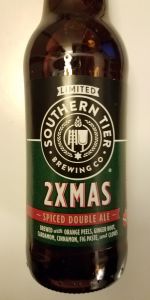 Notes: Swedish flags are a fairly common sight in our part of the country. Holiday parties often have warm concoctions of spices and booze at the ready to knock the ice off of toes while raising spirits. We were inspired by a “Glögg” party, deciding on the spot to brew a beer that pays tribute to this Nordic tradition. 2XMAS ale combines traditional brewing ingredients with figs, orange peels, cardamom, cinnamon, clove and ginger root. It’s a holiday addition to the 2X line and another reason to toast to the season, but unlike Glögg, we recommend serving this one chilled.
View: More Beers | Place Reviews
Recent ratings and reviews. | Log in to view more ratings + sorting options.

Look: Deep, dark copper bordering on ruby with a 2+ finger off-white head. The head hangs around for quite a while Good Lacing

Smell: Sweet fruit and citrus overlaid with sharp ginger and cinnamon of the spicy type.

Taste: Follows the nose, but the spices are not as pronounced. Initial spiciness melds with a cherry like sweetness that does a fair job balancing things out. But the spice does retain its dominance. The spice lingers through the finish and afertaste.

Feel: Creamy and smooth with a medium body. The body does thin out a tad as the beer warms. I prefer thicker, heavier bodies for wintertime brews.

Overall: A fine holiday ale for those who like the spices that are in it (orange peels, ginger root, cardamom, cinnamon, fig paste, cloves) or just like spiced brews. I'd have to say that I am not in that camp. But definitely worth a try.

Pours an effervescent brown with one pinky of tan head. Above average head retention & lacing

T: Follows the nose, certainly has the gingerbread vibe, along with dryness & woody hops. Gingerbread spices dominate as this warms, a little breadyness too. Finishes dry with woody hops, brown sugar & all the Christmas spices

Hits its intended target, but wished it had more body

For how spiced it is, it’s rather smooth. A nice holiday ale.

Pours a translucent dark reddish brown with about one finger of tan head. Ok retention, not a lot of lacing.

Definitely picking up cinnamon, nutmeg, and some ginger on the nose.

Cinnamon seems to dominate the taste. Hint of nutmeg and ginger and some dark fruits. Nice bitterness.

Overall, ok maybe a bit above average. Cinnamon seems to make it a bit one-dimensional.

Pours a dark but clear amber, thick creamy head. This one is heavily spiced, layered on top of some rich caramel malt. But not overly sweet. A bit of citrus in the mix from the orange peel. Of note is that it has outstanding head retention and lacing. Fuller bodied.

A touch abrasive, but this hits the "Xmas" vibes well enough. One is plenty, but it's worth a quaff.

Look - 12 oz bottle poured into a tulip glass. copper red in color, lightly cloudy, and very small head with not much lacing, but has some nice effervescence.

Smell - lots of ginger and some spices, including cloves, cinnamon, and some dried fruit.

Taste - surprisingly sweet. taste is also dominated by the ginger and a fair bit of spices that are not as well teased out as it is in the taste. actually gives of a bit of bitter aftertaste, and it's not hops. some warmness towards the end from the higher alcohol content.

Feel - medium bodied, but on the heavier end. high carbonation, and relatively boozy at 8% ABV.

Overall - a complex and fairly boozy spiced ale. the beer has a lot going on, but not everything comes together harmoniously. not bad though.

A perfect, flavorful representation of the holiday season. From the red appearance to the notes of nutmeg/ginger, this potent titan of the tastebuds is the terrific reflection of it's namesake - (Xmas) or Christmas in a bottle.

This is a good spiced ale. Would be better with a bit more carbonation and a lasting head.

Medium bodied with just under average carbonation
Aroma is heavy on the spice, then fig and malt
Taste is definitely a mixed bag of spice which comes off just a bit heavy. Fig paste and malt is flavorful without being overly sweet.
Perhaps too much spice made this a bit off but its a decent holiday beer

Beer is reddish brown with a thick beige head.

Nose of ginger and other spices and some dark bread.

The taste is slightly sweet with spices and lightly roasted malts. The spices are prominent but not over powering. For an 8% beer the alcohol is well hidden.

12oz bottle. Best by date on label is '10/28/21'.
Brown colored body, looks clear. Skiff of beige head. Leaves a few scattered points of lacing.
Aroma is sweet fig, cinnamon, cardamom, cloves, ginger, and a touch of orange citrus.
Taste is loaded with the spices (cloves, cinnamon, cardamom). The ginger comes through in the second half of the profile, and really gives the beer a root based flavor touch. The orange floats above it all. More subdued is the fig dark fruit because it is subservient to the spices. The aftertaste is roots cola.
Mouth feel is creamy and a little fizzy, more than medium weight. Good carbonation.
All the spices lend this to be a seasonal holiday choice. Might be good with a spicy charcuterie board, and strong cheese.

12 ounce bottle. Pours a dark amber, almost brown with a bone white head. Nose is quite strong, heaviest notes are allspice, cardamom, cinnamon and clove. There’s something sweet there, but I can’t identify. Flavor is where I get thrown...cinnamon, clove, cardamom, fig, pear, rock sugar, maybe star anise? Mild orange peel bitterness helps at the finish. After taste is odd, almost like grandpas cologne or something. As you drink, the aroma inside the glass actually turns things a bit, this is a strange beer. As much as I wanted to love this as I do Mad Elf, it just misses the mark for me. I love Southern Tier, just not this one.

Appearance:
Pure amber; not bright, not dark, not tinged with orange. The very definition of the color. A small pale head forms when poured hard but dissipates in a hurry.

Taste:
Baked wheatbread and cloves dominate, making 2XMAS unexpectedly savory. Warm cinnamon isn't far behind, arriving hand-in-hand with allspice. Orange rind and fig are late to the party, but their presence is notable nonetheless. It's an unlikely group of diverse flavors that come together in one place and somehow seem to get along, kinda like a big family gathering on Christmas.

Feel:
Medium body, mild carbonation, and all that spice-induced warmth makes 2XMAS cozy and predictable with each sip.

Overall:
I find 2XMAS wanting. The exotic bushel of flavors listed on the package are all very tame, almost boringly so. I'd hoped the fig paste would be more audacious, the orange peel sweeter, the cinnamon to come out and dance more often. Instead, in an unusual turnaround, Southern Tier plays it safe, each aspect of 2XMAS making a polite appearance but ultimately falling short of the engaging piquancy I hoped it would be. But hey, that's a family Christmas gathering in a nutshell. Cheers!

Pours amber. Heavy clove aroma. Sweet and spicy with a slight malt character that brings it all together. Orange and clove throughout. A pretty solid Christmas ale with some kick.