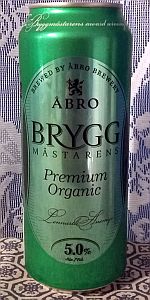 Notes:
View: Beers
Reviews: 1 | Ratings: 5 | Log in to view all ratings and sort

500 mL can picked up at The Beer Store; best before Oct 3 2017 and served well-chilled. I had to take a quick trip to Google Translate in order to ensure that I was putting this review in the correct place. Turns out that the name translates to "Best/Premium Organic", which is what my can says, so that means I'm presumably in the right spot.

Pours a foggy golden-blonde hue, containing an unusually high quantity of suspended sediment flecks - at least for this style. Just over an inch of foamy, sparkling white head is swiftly reduced to a creamy-looking collar and bubbly cap, with a small amount of lacing spattered onto the glass during this two minute period. Looks fine. The nose is very muted, with barely any discernible features whatsoever - hints of grassy hay, with perhaps a touch of exceedingly clean, grainy pale malt sweetness. It doesn't open up much as it warms, either... it's definitely inoffensive, but sadly I cannot award good "aroma" marks to a lager that barely has one.

Pretty bog-standard stuff. The website says there are Cascade and Citra hops in this, but I'm not noticing any - did they dilute them homeopathic-style before tossing them into the brew? The flavour starts off clean and grainy, with a light, crackery sweetness that is eventually overtaken by some grassy hops on the back end. Suggestions of red apple skin, lemon pith and boiled vegetables, with an indistinct aftertaste which I would not describe as particularly clean. Light in body, with moderately low carbonation that results in a soft, fairly smooth texture. Not as crisp as I prefer my lagers to be, and bland and inoffensive at best, but at least it's not a challenge to knock back.

Final Grade: 3.19, a disappointing C+. Åbro Bryggmästarens Premium Organic is a passable Euro lager, but if this is supposed to be a pils then it simply isn't a very good one - there's almost no noble hop flavour whatsoever. I'll cut it some slack and grade it as a regular EPL instead, but only because there is nothing on the label (or website) to indicate that it was intended to be a genuine pilsener, German or otherwise. I definitely preferred their Premium Gold/Guld over this particular offering, which I doubt I will return to anytime soon.