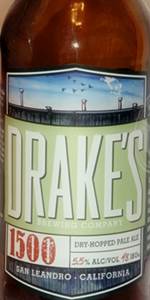 Notes: As we approached our 1500th batch in San Leandro, the brewers decided to attempt something different. They set out to make a pale ale with a clean, stripped down malt bill and plenty of late addition hops that would give the beer huge flavors and aromas of bright citrusy American hops without overwhelming the balance with bitterness. The resulting beer packed the aromatic and flavorful hop punch of a West Coast-style IPA at a very easy drinking 5.5% ABV. The brewer and the people loved it. Now 1500 is a Drake’s flagship beer.

Had this pale ale on draft at the Benchmark Eatery in Santa Barbara. It's a solid if not great pale ale. Still, gets the job done. Crisp, refreshing and goes down easy

Raul quite liked this bad boi. I mean, he didn't like it like he liked (name redacted) in high school; but Raul more so likens it to that flight attendant that he met while flying back home from Portland, Oregon. Not memorable like a first love, but freaky enough to stick with you. A bit crisp, a bit hoppy, nicely balanced... Yeah, Raul would continue to go on but he doesn't want to cry.

I love you my peeps.

Not a DIPA; seems like a regular english/american hybrid IPA.

Smooth, balanced IPA with great biscuit malt profile along with leafy, tea-like hops. Plenty of drying bitterness from early hopping and a nice bright earthy/leafy dry hop flavor. A touch of mid-palate cookie sweetness dries right up for a clean finish. Lots of subtle finesse in this beer. It makes many over-hyped double IPA's seem clumsy. Another great beer from a great brewery.

12 oz brown bottle capped. Pours out a lovely copper to light brown color with a nice soft white head. Smell is a bit lacking relative to the draft version that I just had about 2 hours ago at their barrel house. I do get a minor trace of some hoppyness which I can't identify.

Flavor brings it back in to check with a firm bitterness. It does have some lower malt notes but I wish the hops shined a bit more. Bitterness is were it should be but the flavor and aroma is just plain lacking. I realize that it's hard to get the notes I'm looking for in a bottled beer.

Would I buy this beer again? In a second! It's a lovely example of what a brewery can put into a bottle. On draft, I personally would consider this a world place American Pale Ale.

Go buy this beer and enjoy the hell out of it.

Presentation: Had a small sample of this from fellow BA Swillinbrews glass at Hollingshead Delicatessen earlier today, holy moly, it was so damned good I instantly decided to Blag* a whole Growler of the stuff whilst I enjoyed the Russian River Temptation and Supplication that was also on draft.

Described on the Tap Handle simply as 1500 Pale Ale, it was explained to me that this meant that it was the 1500th Batch at Drakes and that it was a special brew based on the standard Pale Ale produced for the occasion. Though I am not sure where the BA prefix of Imperial comes from, strength is supposed to be between 5.5%  6.5% allegedly.

Appearance: Only an hour after being poured into the Growler its back out and into a 24 ounce straight sided Pint Glass and I have to state that it looks fucking good. This has what I would call a perfect light brown coppery Yorkshire Bitter body. Has a racing lively carbonation on the swirl. The head forms large then drops to a low key but dense ½ off-white colored cap that retains a stabilized appearance throughout. A thoroughly solid presentation for a Session Pale Ale.

Nose: Hmmmm, smells like an IPA. Yet upon careful consideration of the nose, at least once you get past the spicy hops, it reveals a decent biscuit malt which does actually balance the hop laden aromas. Juicy feel to the aromas.

Taste: Luscious juicy hops, biscuit malts, toasted Muffins and a light grain feel soaked in dark fruits and caramel toasties. The hops really play a huge part here, some would surely say that this is an IPA but I say neigh, neigh, neigh.this is a hoppy Pale Ale, a different breed by far. The solid malt base, biscuit hue and toasted bread soaks up some of the hops and thereby represents all that is good about hoppy West Coast Pale Ales. The hops.mmm..they are fresh, juicy and piney too. Oh my this is so good.

Mouthfeel: An Amazonian Goddess.Big, Bold and Beautiful. Lots of juicy hops and supporting malts. Yet throughout this hops and malts battle, it retains a low ABV and maintains a superb balance that maybe the hops edge, well at least towards the end of the drink anyways.

Drinkability: OK, I filled a whole (Alpine) Growler for much less than the price of filling my Cars Gas Tank..and I never even moved from my Apartment whilst drinking this. The Beer Mileage on this one is terribleif you get some of this you wont move either until youve polished off a few off them believe me. I dont know what the strength is, but I do know that this is one high quality Pale Ale that has some serious IPA aspirations, it borders between the two, but the solid biscuit malt retains an English Pale Ale, whilst the Columbus and Ahtanum hops continue to tease throughout. Ladies and Gentlemen the Drakes 1500 Pale Ale has left the Growler..

Overall: Well bless my little Yorkshire cotton socks, I am seriously impressed by this one!!! Not only does it look great, it has more than a decent enough nose for the style, a lovely hoppy West Coast trait in the flavor profile and a seriously dangerous Drinkability. As we say in Yorkshire, bye eck lad, thas a reet gud Ale. All factored together, this is, from the tap at least, a **DO NOT MISS BEER**.

If the Meatloaf Album Bat Out of Hell was a beer, this would be it, over the top in parts, soft yetb hard classical rock meets a massive operatic infusion in its breadth and reach..whether you like it or not, it works, and it works well.

Did I really give a Drake's beer a 4.75?? Guess so...Paradise by the Desk Board Light..well deserved too.

Im heading back to Hollingshead tomorrow for another Growler of this beauty!!!

Appearance: pours an orange color with a 2" fluffy head that slowly fell. Thick lace painted the glass during the session.

Smell: oranges and a soft bitterness were the dominant aromas.

Overall: this beer was very easy to enjoy and tasted great as it seemed to be a super fresh keg. This can be a sessionable beer and can be enjoed with a variety of foods.

On tap @ Hollingshead. This is a pale ale late hopped like an Imperial IPA. Uses Columbus and Ahtanum hops (never heard of this hop before)

Poured a coppery Ice-T color with a tan head that lasted. The aroma was slight malt but all about hops and pine, then a bit more hops. The up front hop taste hit my mouth but with a balance i should say. It was punchy citrus and pine on a good malt backbone. Hoppy for sure, then more pure hops to follow. I am very impressed with this one and will get a growler of it.

On tap at O'Briens

Golden orange brew with soft white head. Moderate floral aroma with lots of grapefruit when swirled. On the tongue there is a solid hop bite giving way to huge juicy mouthwatering grapefruit rind. Grainy malt is present but not overdone. Full to medium body. Alcohol subtle.

Overall: Huge and juicy hop flavor, actually not that bitter.
---
retaste 9/19/05
Tons of grapefruit, that is the main selling point. This time I felt that the initial hop bite was a bit harsh, so I'm going to bring down the taste rating to a 4.5