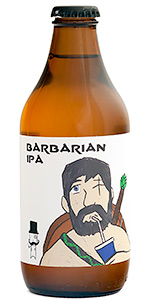 Last of the 5 Brewski beers I had in my fridge waiting for review is Barbarian IPA. Here’s hoping it’s an OK bottle as 2 out of the 4 I’ve reviewed had issues with refermenting in the bottle and gobbling up all the sugar leaving them overly bitter and crazy fizzy! Still I’m not too deterred as the ones that were good had a great deal of promise, and it seems that all the Brewski brews are unpasteurised so there is a trade-off with that (flavour characteristics versus possibility of over-fermenting yeast). Although it could be some other problem with the brewing process, IDK I’m out of my depth here, all I know is that lightning shouldn’t strike twice and with the Brewski beers I tried it has. Lightning striking 3 times? Surely that is impossible! *TCHSSK*

A: Uh-oh, another gusher of a Brewski, with a massive white sea foam head and a cloudy pineapple juice coloured body with huge yeast clumps floating around before sinking to the bottom of the glass. This is looking an awful lot like Mango Hallon Feber - which was totally spent of sugar content. I normally don’t mind yeast clumps (a good dose of Vitamin B) but in this beer I’m worried. 6/10.

S: Fruity, hints of pineapple and mango, with some hefty green piney notes too - it’s shaping up to be a good one if the bottle survived the 4 sea voyage. The hop character in the aroma is superlative, as it was in Mango Hallon Feber too, just so green and fresh - these Brewski peeps use top-shelf ingredients. 9/10.

T: Well, ok then, it’s fizzy AF, but it’s more like Conan DIPA with OTT sweetness. Flavours are: Pineapple, mango, hint of lychee and piney hops, with a light biscuit malt base, the sugar coming more from confected tropical fruits than anything else. Overall flavour, like Conan, tips too far towards sweetness, however it’s not quite as cloying or pronounced as Conan. 7/10.

M: Yep, as noted above: Fizzy AF - too much carbonation, with a medium body and some cloying sweetness, not nearly as enjoyable as Donkeyboy, which it appears is the pick of the bunch. 5/10.

D: Cliff notes: Better than Conan DIPA, not quite as good as Donkeyboy, lacking sweet/bitter balance being skewed towards sweetness, though the flavours on offer are alright. Brewski really should consider pasteurising their exported brews, I get it has an effect on flavour but their consistency is lacking. 8/10.

The colour is pale gold; the liquid a bit hazy. The two finger head is white and airy, it sinks slowly leaving some lacing.

The smell is sweet with a somewhat sharp-acid bitterness. Fruity notes of mango, grapefruit and green apples. Hints of tar and cream.

The carbonation is medium strong; the mid-sized bubbles are long-lived. The liquid is smooth and a little sticky.

I think that those unexpected gunpowder notes are something of a Brewski hose taste. I liked the fruity hops but not the thick sweetness.

Slightly hazy yellow color with bubbly white head. Aroma is quite dank and grassy, really fresh with some tart fruit notes. Taste is also really hoppy but quite sweet and fruity. Finish has some dry bitterness. Medium body with smooth mouthfeel. Quite good overall but slightly sweet for my taste.