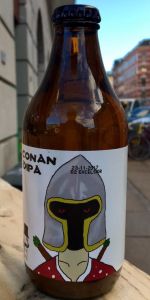 Appearance: A hazy darkish golden orange colour with a one finger white head that had pretty good retention and left some nice lacing.

Taste: Orange juice, pineapple, bitter citrus rind and pith with a touch of alcohol on the backend.

Overall: Quite nice with good fruit and bitterness coming through, although it would be even better if the alcohol was hidden.

I realise going in to this review that there’s like a 50% chance this is going to be another dud, by dud I mean: another over-fermented brew, from Brewski. Whom I happen to like, despite the problems I’ve had already with Mango Hallon Feber and Pango IPA. I chalk those gone-bad brews down to luck of the draw and move on. So next up is Conan, then I’ve got their Barbarian IPA... wait, Conan and Barbarian? There’s some cultural reference to be found there... Anyway hopefully this will be another Donkeyboy, Donkeyboy was pretty damn tasty - I ended up getting a 2nd bottle of that and downing it along with a bottle of Omnipollo Texas Vanilla Ice Cream Pale Ale... I should have cooked up some Swedish meatballs too, oh well.

A: Cloudy AF Goldenrod body with a thin white cappuccino head on top, looks heaps less excitable than the bad Brewskis I had above, so fingers crossed. These guys definitely like the NEIPA style too. 8/10.

T: Well my fears have been allayed! This bottle is OK! Flavour is a sweet, almost confectionary passionfruit with hints of mango, pear esters and a slight herbal bitterness towards the finish. It’s a bit sweet with very little to balance it out though, unlike Donkeyboy which had a razor-sharp balance. Which is a shame because you could see where they were going with Conan - NEIPA styled as it is, however it really needs a bit more hop character to balance out the sweetness. At least the bottle is fine, hopefully Barbarian has also survived the long sea voyage to Australia. 6/10.

M: Medium bodied with a nice compact carbonation, sits right in that “sweet”-spot in flavour (literal) and mouthfeel (figurative). 8/10.

D: Were parting not such sweet sorrow, this Brewski DIPA finds itself in a bit of a weird zone for categorisation, being both a DIPA and a Dessert Beer with all this sweetness on hand. If it had a bit more depth to it I might have been a fan, but it’s just a singular minded passionfruit affair, with a few minor other flavours. Overall I’m still glad I bought these Brewski beers with their cute labels, each one has been a different adventure into flavours expected and unexpected. This however is a brew for someone who is more a sweet-tooth than I. 7/10.

Food match: Roast turkey with a cranberry and quinoa salad.

A great dipa. Hazy gold with a thin white head. The smell is a lot about mango and the taste about passion fruit and some herbal character. The carbonation is low. A dank and juicy Dipa

Slightly hazy yellow color with white head. Aroma is quite grassy and vegetal with nice fruity hops as well. Taste is also juicy with grassy hops but also slightly sweet and fruity. Medium to full bodied, quite smooth on the palate. Really nice DIPA, hoppy, smooth, easy to drink.