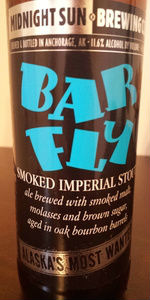 Somber and smoky, BARFLY saunters into the room slowly. Thick smoke. Cool swagger. Good wood. Too much brass. Sticky leather. Slow glances. Lingering looks. The only thing that didn’t make the glass was maraschino cherry. Bring your own and wear out your welcome.

Yesterday's meandering around through the Bottle (!) Backlog took a detour into The CANQuest (tm), however gloriously briefly, but today, it is back to/on the Bottlewagon. 8=( My recycler must be astounded this past month+ since I rarely fill the bin, but I have been doing so on a weekly basis since ~ 16 March. Usually, I am laser-focused on CANs & those get set aside for a ~ quarterly visit from Jeff Lebo over in York County for his massive CANlection. All is not lost, however, as most Bottles contain things that I did & still want to drink. Especially the barrel-aged beers and even more especially, the non-whiskey barrel-aged beers. They give me an opportunity to delve into my liquor cabinet where it normally remains closed with its contents merely gathering dust. Sigh. My advancing age has softened me up so that I no longer desire shots. I will merely pour a wee dram & sip on it over the course of the review for a point/counterpoint. This is one such beer.

From the Bottle: "Somber and smoky, BARFLY saunters into the room slowly. Thick smoke. Cool swagger. Good wood. Too much brass. Sticky leather. Slow glances. Lingering looks. The only thing that didn’t make the glass was maraschino cherry. Bring your own and wear out your welcome."; "ALASKA’S MOST WANTED[:] Midnight Sun crafts some of the most sought-after beer in the world. This line includes creative successes from several themed beer series as well as amazing one-offs. We hope you love our very special brews as much as we do. A gracious thank-you to our longtime 'every weather' Alaska fans for year-round love & feedback."; "Bar Fly Smoked Imperial Stout"; "Ale brewed with Smoked Malt, Molasses and Brown Sugar, Aged in Bourbon Barrels"; "45 IBUs".

I was very anxious to Pop! the cap & start a slow, gentle C-Line pour since I have been on a Smoke Beer kick lately. I watched in rapt fascination as it foamed up to form two-plus fingers of dense, foamy, rocky, deep-brown head with excellent retention. Color was stygian Black/Opaque (SRM = 44), allowing ZERO light penetration. Nose reminded me of Smittay's Smoked Bourbon Maple Syrup! 8=O Sweet, smoky, boozy, woody, all at the same time! 8=O Mouthfeel was big, full & creamy, like a dollop had been scooped into my mouth & onto my tongue! The taste was a masterful blending of smoke, what I would have mistaken for maple syrup & a woody bourbon flavor. 8=O Its smokiness was not as intense as, say, it's Alaskan Smoked Porter counterpart, but this was not intended to be that (I hope). Still, it was far smokier than simply being an AIS. I was not pairing it with Bourbon a) because I did not have any on hand (I prefer Rye) & b) it was a subtle Bourbon flavor where the smokiness was quickly becoming the superstar, especially as it warmed. Phew! The brown sugar gave it a maple quality, helped along by the treacle. This was quite the drink. I found myself falling into drinking it like liquor, a wee sip at a time.

I could have poured this into a schooner glass at this rate! I've to see it in this day & age, but a schooner (~ 10 fl. oz.) was an option when I was a wee lad, especially for those on the go. Have a quick schooner & be on yer way.

The more I sipped on & of this, the more my thoughts returned to AK. I'd been to Ketchikan & Anchorage while in the Navy, but it was my 2008 trip to ANCAK that really bore fruit. I had a lovely CouchSurfing hostess who worked at La Bodega & we did an early, pre-morning raid during my visit. They had La Dragonne on closeout (!) & I bought a bottle to exbeeriment with. It actually calls for warming in a double-boiler & when she returned home, we (her housemate & two other surfers + meself) ha a steaming cup ready. The house smelled magnificent & upon trying it, she called her boss & had all remaining bottles set aside for us! 8=) The other lasting memory is of my partaking of salmon. When she picked me up at the airport, I was gnawing grilled salmon on a stick. The following morning, I made salmon scrambled eggs. She called me at Humpy's as I was in the middle of plank-grilled salmon for lunch. By the time that she picked me up, I had candied salmon on a stick for us. She was flabbergasted! I ate salmon for three straight days & could have eaten more except that I had to get back CONUS. Drinking this put me in mind of both the smoked salmon & the candied salmon. Yum.

Finish remained fashionably smoky, slightly bourbon-y with a sweetish treacle/maple syrup/brown sugar quality. For all of that, though, it was still quite dry. The smokiness left me feeling as though I had inhaled a nearby house fire. Not in a bad way, but the smokiness was prevalent & unabating, leading to an inherent dryness. YMMV.

The smoky aroma is stronger than it follows on the tongue, but this is a damn good stout in it's own right. Probably second to Berserker and still a ways behind some of the others at the top of the stout game, but Midnight Sun truly does it's thing a little different and you will undoubtedly find some originality here, not the same sad attempts to copy the greats. I think you will be pleased, especially for the price.

I don't pickup up any smokiness per se, but the heavy, chocolatey sweetness and bourbon-barrel aging meld together nicely.

Aroma – Strong roasted malt, less smokiness than expected, some molasses and light sweetness, a little boozy at the end.

Taste – Smoky, rich malt, molasses, and a bit of bitter roasted character on the finish.

Overall – Although the smokiness wasn’t as present in the smell, it came through in the flavor. Nicely done.

Poured from a 500mL bottle into my Portsmouth tulip.

Sweet booze-laden aroma with a touch of smoke. Tobacco, vanilla, and oak reveal the bourbon.

Very slow building flavor profile, initially sweet but with a residual tang resolving to a long, increasingly smokey, increasingly dry decay. Earth, wind, fire, BBQ - lots of depth here, and quite liberal with the specialty malts. Low bitterness both from a bittersweet chocolate note and a touch of forest-floor/citrus-kissed hops. A few hints of dates and molasses too. Burly, but not without subtlety.

Medium-full bodied, almost oily but with good carbonation; warming but not fusel; tannins are restrained despite all the smoke.

Best shared with others, and while not exactly a dessert beer, it would pair well with a creamy/nutty soft-ripened cheese.

22 oz. bottle dated 11/23/15 plucked off a shelf in Seattle, WA, & removed after several years on my wants list. Split with my wife. Don’t tell her there are smoked malts in it.

Black. What will they think of next. Nose is tame – little smoke, little chocolate, little sweetness. No barrel detected.

Bar Fly would benefit from microwaving straight out of the fridge. The bourbon is soft rather than aggressive, touching gently rather than slapping my ass. Underneath is long, slow roast, slight ashiness that I’ll attribute to the smoked malts, backdrop of sweetness, ending with a heavy dose of wood. Plenty of alcohol, both in the taste & in my faulty typing. Half a bomber is good by me.

A bit quieter than my previous experiences with Midnight Sun, but a very good beer.

This was poured into a tulip. The appearance was a nice looking dark brown close to black color. It kinda poured like motor oil. Thin tan quarter finger head coats the top of the beer. The smell had a big boozy blast of sweet bourbon with an ample amount of smoke and a light sweet maple running underneath my nose. The taste was mainly sweet with a nice smooth smokey underneath. On the palate, this one sat about a medium on the body with a really nice sweet smooth bourbon aftertaste leading to a dry finish. Overall, I say this was a pretty good smoked Imperial Stout. I’d bang this again.

S- smells of black strap molasses with a sharp black cherry aroma up front, followed by earthy notes of tobacco and leather. More sweet notes of caramel fig, brown sugar, even a bit of a sherry note. The close gives subtle bourbon oak and just a hint of earthy smoke

T- opens up with tons of dark fruit, specifically prune and fig, followed by sweet notes of molasses, brown sugar and caramel. Mid-palate gives on almost tart dark cherry notes, along with just a hint of smoked malt. The finish gives just a trace of bourbon and oak, with a linger of tobacco, molasses and black cherry

M- heavy body with moderate carbonation leads to a creamy mouthfeel that continues into a velvety smooth, slightly warming finish

O- Every stout I've had from them has been a perfect mouthfeel, thick and creamy. The smoke has faded on this one and the sweetness mellows everything out, very good

Typically inky black stout. The head is thin and clings to the edges but not the sides of the glass. It's dark, almost brown.

The smell is dominated by the smoke. There is also chocolate, malt, brown sugar, cinnamon, oak, and bourbon in the mix, but smoke almost overwhelms the other notes.

Same flavor: lots of smokey malt, some chocolate and cinnamon and brown sugar behind the smoke, and hint of oak and bourbon in the background.

It's a smooth and creamy-feeling feeling stout with its alcohol well hidden. Or maybe it's just the smokiness covering up the alcohol heat.

I think BarFly is a good example of this style of beer. It's not on the same level as Bo & Luke, but it's much better than your average smoked stout.