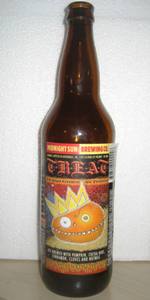 Notes: Intriguing doses of sweet spices, cocoa nibs and pumpkin transform an exceptional porter into a mesmerizing potion. Pour this tantalizing brew into a snifter and experience its many eccentric nuances, which will delight your taste buds.

This is the same award-winning recipe that garnered a GOLD MEDAL at GABF in 2007. Formerly known simply as Imperial Chocolate Pumpkin Porter, we’ve named it T.R.E.A.T.: The Royal Eccentric Ale Treatment.

Pours an opaque black body, impenetrable to light beneath the abundant mocha tan head, which does seem a bit on the fluffy side for the style. The head is very patient to dissipate leaving a thin ring of lacing grabbing the glass.

The aroma is much more pumpkin and spice than anything else. There is a hint of the advertised chocolate nib. The pumpkin really is like pumpkin meat more so than others that is like roasted pumpkin seeds or even loaded up on spice.

Now the flavor is a whole different story. Again there are pumpkin and traditional spices but the chocolate nibs are much more pronounced and the roasted/smoky aspect one would expect from a porter is also very present. In my opinion, this is a unique knockout of a flavor. Perhaps not aligning with any one traditional style, but Midnight Sun really did a nice job putting this together.

Medium in body with generous carbonation. Perhaps a bit light for a porter, but my guess is that when you put a beer like this together that mingles style lines that happens.

I was not sure what to expect of this beer as other hybrids like this have disappointed but this did not. As my notes indicate, I felt the flavor was really the highlight of this beer, and if you can live/taste in the gray area, you may enjoy this.

I think this hit the pumpkin seasonal style on the nose. Both nose and Taste of chocolate pumpkin pie. And it hits that canned pumpkin pie mix that goes into making that pumpkin pie on the head. Starts off with a more pronounced chocolate that you don't normally get from a porter and finishes that spicy and cinnamin pumpkin pie mix perfectly. Mouthfeel spot on for the style.

Would definitley have this again but at $12.99 I'm just not THAT big of a fan of Porters in general. To conclude and quite honestly...not sure why this would get any score less than a B+ unless you don't like pumpkin pie, whereas why would you buy it if you didn't?

22oz bottle poured into a snifter.

A: Pitch black. One and a half finger, super creamy, mocha colored head. Great retention and beautiful lacing.

S: Roasted pumpkin and chocolate stand out. With a nice behind the scene spice from cinnamon and nutmeg. A very light trace of clove. Touches of coffee come through.

T: Pumpkin upfront. Coffee and chocolate come next with a slight bitterness. Light spice comes through with the clove standing out a little more. Finish is a bit roasty.

O: A very awesome beer. Everything blends very well. The spices aren't overbearing. Definitely one of my top pumpkin beers.

Thank you Bottle Trek for the opportunity.

The pour is pitch black with about an inch of tannish foam.

The smell, well, is amazing! Fresh pumpkin pie that *just* came out of the oven, and with all the fixins. Nutmeg, chocolate, wow!

I take my first sip and the aromas I mentioned are there but slightly less impressive. Slightly. Big nutmeg, pumpkin, light cloves, chocolate, all VERY tasty but the smell, for sure, was an awfully hard act to follow.(see my score for smell)

To be fair, the 1st week of October was notched....

On the high end of medium bodied with a lightish amount of carbonation, the mouthfeel is fine as is the drinkability. This is a great beer; my only regret is that I didn't have a chance to taste it back in October or even November.

O - Really enjoyed this one...much more stout-esque then any other pumpkin beers I've had. Would def drink again and I think the 2009 was better then the 2010, FYI.

Poured into a stone nonic. 2010 bottle but couldn't resist the opportunity to try this beer.

A: Pours a basic, somewhat thin looking black with a mild tan on a 1 finger head that leaves mixed, but mostly solid lacing.

S: Was really surprised by the smell on this. A little bit of chocolate and natural pumpkin, but overall spices dominate the heck out of scent. The spices are obviously pumpkin pieish but are pretty imbalanced and create a spie potency reminiscent of a powerful mint. Somewhat awkward.

T: Much like the nose but the spices are a little more tame, and chocolate, pumpkin, and a tad of coffee bloom more. Still, the taste is really potently spicey and unignorably imbalanced.

M: The carbonation is a little creamy and there's some chocolatey residue in the afterfeel but overall it's more watery than I expected.

O: I will credit much of what I disliked with this beer to the age. I'd love to try this again fresh-- would enjoy a bigger chocolate flavor and much more spice balance. As it was, though, it was only okay-- and maybe a little better than that.

Thanks to TomDecapolis for sharing this...
Appears a dark brown with crimson highlights with a dark tan collar that slowly fades into a thick cap and collar and keeps nice retention. Tons of lacing is left around the glass.
Smell is of cocoa, nicely baked pumpkin bread with mild spicing and cream addition.
Taste is of the aromas with light lactose tartness and cocoa nibs jumping out.
Mouthfeel is medium bodied, slightly thin, mildly tart, tasty, chewy, with a touch of cinnamon hitting the tongue during the swallow.

22oz. bottle poured into a tulip. Thank you to cjacobsen for sharing!

(A)- Pours a fairly thick pitch black color. Produced a low level tan head with some lacing here and there.

(S)- Spicy. Lots of clove & cardamon with some subtle nutty pumpkin and nutmeg as it warmed up.

(T)- Again, heavy on the spices with some molasses and cocoa in there with the pumpkin. Getting bits of tobacco and clove, but that started to disappear as it warmed up. A bit dry.

(M)- A good carbonation level and balance. A bit dry, yet has a nice spice profile with subtle creamy pumpkin.

(D)- A bit heavy on the spices; would like to see more of the pumpkin and chocolate come through, but it is still rather good as it is.

Pours oily black with mahogany edging. Medium head of short duration and tan color. A fine bead of foam clings to the glass atop the opaque darkness.
Aromatics are rich, spicy, and lucious. Cinnamon and nutmeg in the forefront of dark chocolate and espresso.
Pumpkin is evident only in a suggestion through the spice, and the nose is big, bold, and complex. Spicing is not overbearing and complimentary.
Body is thickish and tacky, slick and clingy.
Pallet does not dissapoint. Lots of rich, oily chocolate accented with pumpkin spice and roasted malts.
Extremely smooth and dilectable. Reminiscent of Rogue's chocolate stout, but more complex and artfully spiced.
Bitterness is minimal, keeping the residuals in check.
Finishes long and full, with lingering cocoa and warming alcohol.
Big ups to Timmcd64 for hooking me up.. Proper!

22 oz bottle from aekoops in a trade. Bottled in the 4th week of August. REALLY stoked to finally get to try this one. Poured into a Weyerbacher tulip glass...

A - Pours an opaque black color with just a bit of mahogany red hues when held to the light. No real head at all, but a light-mocha colored collar forms and stays throughout.

S - The aroma starts off with nutmeg and cinnamon really taking the spot. Pumpkin comes through a bit but is mostly present because of the spices. Sweet milk chocolate cream contrast nicely along with some roasted malt. The spices kind of drowns everything else out.

T - Th taste seem much more balanced and is the reason I was so stoked for this beer. Pumpkin spices start things off along with some hints of pumpkin flesh. Slightloy bitter cocoa nibs and sweet chocolate come next mixing nicely with the aforementioned spices. Some roasted malts also come into play nicely. I would recommend letting this one warm. When it was 15 minutes out of the fridge, the pumpkin and spices really dominated. But after a while, everything seems to mix together in a more harmonious manner.

M - Medium bodied beer that feels ever so light bodied here and there. Nice carbonation makes the beer more creamy and smooth. Spices and chocolate really sit on the tongue for a while making for a nice long finish.

O - Really enjoyed this one. It was the marriage of flavors that I had hoped for. While it didn't blow me away, as I had hoped, it still became my new favorite in the world of pumpkin inspired beers.

Bottle: Poured a dark black color porter with a nice medium brown foamy head with good retention and some lacing. Aroma of cinnamon and light roasted malt with some light pumpkin undertones. Taste is a complex mix between some cinnamons, some light dry roasted malt with some light pumpkin notes, some nutmeg and a nice rich black chocolate finish. Body is about average with good carbonation and no apparent alcohol. This is quite a unique recipe with loads of complexity while retaining a good drinkability level.

Poured from a 22oz bottle to a snifter

S: Spicy. Cloves, cinnamon, nutmeg-just like it says on the bottle. Spices kinda overpower anything else. Maybe a hint of alcohol.

T: Almost great. Spices dominate, but chocolate and roasty malt are present, which gives it more a more pleasant and complex character than the nose. Just a touch of citrusy hops. Then something I can't identify, but slightly sour, almost metallic comes through in the finish to ruin it all. Okay okay, so maybe that's a bit of an exaggeration. The metallic taste is not terribly strong and certainly doesn't overpower all the other great tastes, but it definitely drops the taste score by about a point or two. Also, rather than becoming more complex as my glass empties, the flavors just seem to mesh into one undistinguishable mass of decent, but not great flavor.

M: Medium body. Oddly, it feels like it's carbonated even though I haven't seen a bubble in my glass since a couple seconds after pouring. Seriously, this beer looks like a really dark, oddly colored wine. It fits the beer well. I think a hefty dose of carbonation would mask the odd flavor, but really the problem there is the taste, not the moutfeel.

D: Overall, this beer is not as bad as my review makes it sound. Still not great, and still not something I'd seek out again, but not as bad as the rest of this review would suggest.