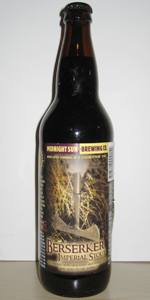 Original release of Berserker was at 10.4%, subsequent vintages have gone upwards of 12.7%. When reviewing, please list beer vintage and that vintage's specific ABV.

On draft at the brewery. Poured out an opaque, jet-black color with a small, khaki-colored head of foam. It left sticky rings of lace on the glass. It smelled of dark chocolate, dark dried fruit, tobacco, caramel and coffee. Big roasted malt taste with toffee, caramel and a sharp bitterness.

Hi fellow beer bro's! I'm the great Eric Lambino and I just wanted to pop in and say WOOWZEE WOWSERS this beer is a flavor EXPLOSION. From the caramel notes when it first touches your lips, to the smooth cocoa middle, to the crescendo of coffee to follow this beauty is a symphony of satisfaction. A melody of malt, a diddy of delight! Please, for me, the great Eric Lambino, give this beer a chance.. your life will never be the same again. Lambino out.

Pitch black in the glass with a pinky worth of thick, caramel colored crown capping it off. Crown settles in to being a thick ring attached to the glass and a misty island covering the rest.
The nose brings dark, unsweetened chocolate mixing with hints of fruit. There is an almost peaty, smoky quality to it. That barrel really comes through with the charred oak.
The taste brings in that unsweetened chocolate again before turning into huge waves of dark fruit and charred wood. Sticky molasses and dry tobacco also show through. Maple isn’t too noticeable or overpowering anywhere in this thing, which is good for me.
The mouthfeel is sticky, medium bodied thickness with a smokey, charred quality of dry wood to it.
Overall, this is very well blended between all aspects.

Appearance - The beee poured a tar black color with a mocha colored head.

Smell - The nose was decadent with notes of rich dark chocolate and booze.

Taste - At the front, there were notes of dark chocolate, light coffee, maple, and coconut. The bitter notes helped to balance the sweet. The booze was the bond that held it together in the aftertaste.

Mouthfeel - The viscosity was a touch below used motor oil with low carbonation.

Overall - Newer, trender beers may have taken this one’s place in the top 100, but it is still very solid and worth seeking.

Poured 8/3/2018 from a 2017 bottle. Taste is identical to ten fiddy. Blind taste this to a little aged ten fiddy and it’ll be impossible to beat. A little deflated but still good. BA ten fiddy beat this for sure. Little to no maple or molasses come thru. Good stuff tho. Won’t seek out again

Bottle share. Dull pour, flat and oily, small ring of brown head. Aroma is harsh and wooden. Taste smooths out a little, Dirty, earthy, peaty, a bit of alcohol warmth, bitter at the tail. Salvages itself after a questionable start.Vintage pour, definitely gets better with she. Smooth, sweet and boozy

A - Midnight black, thick tan head with tiny bubbles that dissipates in about a minute.

S - Powerful, with prunes, molasses, bourbon, and other dark fruits.

T - Malt, prunes, molasses, bourbon, hints of oak. Not quite as strong as the smell.

M - Very thick, and a little flat. Not too syrupy.

A 22 fl. oz. bomber with no clear bottled on or best before date. Poured into a snifter.

Appearance: Black in colour with a one finger brown head that dissipated fairly quickly to a ring around the glass while leaving some sparse lacing.

Overall: Nice aromas and taste but perhaps just slightly too sweet for me. The molasses were also a bit overpowering and I would have preferred more maple coming through.

22oz bottle poured into a snifter. Bottle was cellared 2-3 years before consumption.

S: Blackstrap molasses, thick fudge sauce. Hints of roast and char. Smoke. Vinous in a pinot noir sort of way, with a lot of black cherry and blackberry. Oaky vanillins.

O: A massive imperial stout. Big molasses and maple syrup additions sweeten things quite a bit, and actually to the point that they become somewhat cloying. Barrel aging and a good dose of roast and some acrid/smokey malt character struggle, and ultimately fail, to keep it enough in balance. Still enjoyable in smaller doses, as a slow sipper. Good as a digestive, or I'd pair it with a fruit-forward and hopefully tart/acidic dessert.

A black right out of the bottle, some of the darkest liquid I've seen followed by some of the noisiest and darkest foam I've seen, fizzled out leaving no lace but to be expected when wide legs are forming, swirls stick a fair bit of color to the glass....nice looking liquid

T some booze but they did a great job hiding the 12.7%, everything I could smell is still there in one form or another, molasses comes out a little heavy, has a burnt port barrel thing going on, tastes great but I preferred the nose

M shes got some weight that's for sure, sticky as can be, enough carbonation to give it some life, slick inside the mouth, some heat going down but hits your chest and head pretty hard

O fantastic stuff, so much going on its hard to keep track of, so rich, so thick, this stuffs a meal in a glass, even this fairly young bottle has mellowed nicely, a world class brew

One of the better stouts I've had in a long time and a great choice for #3000, I should've grabbed more of these to age when I had the chance as I could see it being crazy good with another couple years on it

Pour is viscous, this looks to be a beast. Aroma is pretty amazing as well, dark berries, chocolate, oak, bourbon and you can feel the heat of this beast in the nose. Taste is alot first sip, the barrel dominates and there is forsure a ton of heat on this for a 12.7%. There is a dark red wine bitterness towards the finish that takes over and disrupts all other good flavors. Hard to describe the flavor beyond too hot and wine barrel. It looks and smells alot better than it tastes.