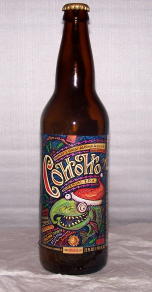 Notes: CoHoHo begins with generous measures of pale two-row and specialty malts along with spirit-boosters like brown sugar and honey. Hefty doses of Cascade, Centennial and Simcoe hops beautifully balance that outrageous malt bill while juniper berries heighten the festive character of this exuberant beer.

Pours like a massive dipa, leaning to the darker end of the dipa spectrum, while it tried its hardest to maintain an orange appearance, there was some lighter brown running around in it.

Aroma was not as Simcoe pungent as I expected, they definitely did not skimp on the C-hops. Loads of bitterness all over this, not really a sweet dipa, this slams hard with bitterness, despite having what appears to be a massive malt bill of 2 row.

I've always looked at Midnight Sun as an expensive proposition, and while this beer is decent, their stuff just isn't to the point with me where I can suggest that people go out and look for this and pay any price. Usually close to $10 a bomber means I'm demanding excellence. Pretty thick mouthfeel, heavy, bitter. Alcohol is moderately noticeable. Buttloads of caramel. Feels like a big dipa recipe put through the xmas spicer.

L: Pours amber chestnut under a thin cream colored foam collar.
S: Brown sugar and honey with some juniper notes.
T: It starts sweet with brown sugar and honey quickly followed by juniper. The uniper nicely balances the sugars and is not heavy handed or over stated. Resiny, piney hops appear in the after taste.
F: Luscious, smooth and creamy, full bodied and chewy, soft in the mouth with slightly below average carbonation.
O: A big beer that achieves a good balance of flavors.

I agree this skews from the DIPA style, but it's a winter seasonal so no complaints here.

Smells much sweeter and maltier than expected. Complex. Caramel, brown sugar, hops let themselves be known at different points in the draw.

Tastes full bodied red/amber ale at first, with hop resin moving in quickly bringing a lighter acidic/bitter flavor. I *think* I'm getting the juniper/gin notes in the middle of the flavor, but you can't underestimate the power of suggestion. Finish lingers nicely with a very pleasant heat from the ABV.

You know you're drinking a big beer, but the overall balance is very drinkable.

Served in a snifter.

Appearance: Dark amber with a bubbly body, head is an off-white slightly thick frame coming off 1/2" off the body.

Taste: It is good but not impressing to the point where you will say "this is a keeper". Little hoppy and floral like i stated above but inmho, "bland".

Mouth: Medium carbonation with a well above average stickiness to it.

Overall: This is good beer but so much better out there in the Imperial IPA category. Buy it if you're curious but I would take a better looks at your usual if you know what I mean, Salud!