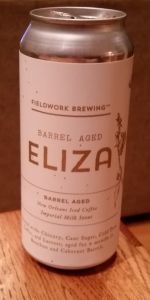 Notes: Eliza is our take on infusing the character of New Orleans Iced Coffee with a beastly Imperial Milk Stout. Taking all of the ingredients you would find in a cup of iced coffee in New Orleans, we added a complex and nutty single origin coffee from our favorite local roaster Catahoula Coffee Co., French Chicory, organic cane sugar, and a hefty amount of milk sugar to give Eliza a thick and creamy texture in line with the drink that inspired it. Much like the ghost ship that inspired its name, our Eliza disappeared for quite some time. Lucky for us it was hiding in a Four Roses Bourbon and Argot wine barrels.

Draught pour at Sacramento taphouse into a tulip glass.

L: Pours jet black with thin ring of tan medium density head with minimal retention that did cling to the glass.
S: Nose is bourbon forward, some sweetness detectable, coffee seemed non-existent.
T: Far more dynamic than the nose. Plenty of vanilla and barrel attributes, some hiding coffee and associated bitterness make an appearance. After having the Clown Shoes Crasher of the Rye last eve, this attempt at the same style is far superior. not hyper sweet which was a concern from the nose.
F: A bit on the thin side, has a slick mouthfeel, and carbonation low-medium.
O: A very nice attempt at the style of a BBA mik stout. I'll definitely get again in smaller amounts, 6-8 oz of this one is plenty at a time.

Pounder can into an oversized wine glass appears black in color with khaki head.

Sweet with chocolate and coffee. Fruity almost vinous with vanilla and oak towards the back.

16oz can into snifter.

A: Pours a thick molasses brown with a huge but active dark cola brown head that faded into a thin collar. Wispy lace.
S: Rich and decadent nose full of strong coffee, chicory, roast, molasses/brown sugar notes and caramel. Bourbon barrel is noticeable as well and complements the other sweet/roasted scents.
T: Just as strong in flavor as the nose let on. Tons of rich coffee up front followed by sweet sugar/lactose, with sticky brown sugar/caramel/molasses flavors following. There is a roasted chicory flavor throughout, along with a sharp bite of bitter/acrid char. I get flavors of vanilla and bourbon in the finish, with dark chocolate and coffee roast in the aftertaste. There's just a kiss of warming booze that lingers after the swallow. Roasted flavors last forever after the swallow.
M: Thick and chewy body, sticky sweet mouthfeel, medium-low carbonation. Touch of booze, bite of char.
O: Complex and extremely potent, this drinks closer to a RIS than what I think of when I picture a sweet stout. The adjuncts add layers of flavor to the dominating coffee note. Delicious.

It pours a glossy black. Looks fairly viscous. It has a very minimal, quickly dissipating, fizzy, tan head with a fairly aggressive pour. When I say fizzy, I mean audible fizzy. When I dumped the last few ounces into the glass it sounded and looked like a cola.

The aroma is very red wine/ currants dominant at first, with a bit of coffee. After letting it warm and breathe for a few minutes, the coffee grows stronger, and lactose sugars and a spicy (as in cardamom/cinnamon) chocolate becomes noticeable. A unique aroma. There is some faint oak in the background along with some tobacco and licorice, and the wine starts to subside a little.

The initial flavor is all red wine. A semi sweet, semi sour dark grape along with some sweetened/condensed milk. Then there is a tobacco that I would expect in a Russian Imperial followed by some chocolate, a mystery spice, a very good, very smooth iced/cold press coffee, some bourbon finally makes an appearance with a little charred oak and vanilla along with some roasted malt in the lingering finish.

The body is on the fuller side and it has a bit of creaminess to it. The alcohol is fairly well integrated.

I have been all over the place with this beer. I bet I adjusted each score at least 3 times. Ultimately, the beer is all over the place too. There are some good things going on here, and they had a great idea to work of off, but as much as I like introducing stouts to wine barreles, this isn't one that worked really well as it introduced flavors not characteristic to a milk stout. Even an "imperial" one. Overall I enjoyed it. Mostly the coffee aspect though.

Velvety smooth, the texture of
This beer is perfect. The description says it is inspired by iced coffee and it really does have a Vietnamese iced coffee character to it. It has some
Noticeable sticky sweetness but it does not come off as cloying. Just smooth, sweet and delicious. Coffee is apparent but not by any means the only thing you taste. Outstanding beer from an outstanding Brewer