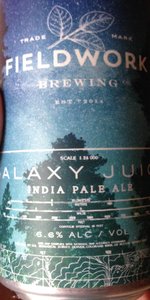 Notes: Another juice-bomb from our series of hazy Northeastern IPAs, Galaxy Juice is a Wamea sized wave of pineapple. Aroma rolls slowly, surging forwards with its trademark notes of fresh pineapple, as you pull your glass to your mouth and take a gulp, Galaxy Juice crashes down with copious amounts of body and bright tropical hop flavors. Its hazy appearance, sticky mouthfeel, and fresh from the fields of Hawaii flavors make it an IPA that is in the styling of our favorite Northeast breweries with a profile that James Dole would give his stamp of approval on.
View: More Beers | Place Reviews
Recent ratings and reviews. | Log in to view more ratings + sorting options.
Ratings by KCUnited:

Reviewed by KCUnited from Arizona

3.93/5  rDev -9.4%
look: 4.25 | smell: 4.25 | taste: 3.75 | feel: 4 | overall: 3.75
Poured from a 16oz can into a tulip
Look: Early 80’s Pitt Panther helmet, pale gold, completely opaque, haze with white, fluffy head
Smell: Big juicy citrus with rind, pineapple, grapefruit, mango, touch of peach
Taste: Pineapple, orange, grapefruit that finishes with a dry, puckering bitterness.
Feel: Medium and silky
Overall: No doubt this finished with more bitterness than I was expecting from the look and smell. Could’ve used a little more sweetness to balance it out. Still a really good ipa that I’d be happy to have available in my market.

Aroma is a fabulous blend of juicy and herbal tones: oregano, basil, and mint add sharp highlights to pureed mango and pineapple, peach and berries, lemon and orange.

Very lively mouthfeel, but soft, pillowy, and unbelievably full for a single IPA clocking in at 6.6%.

Reviewed by BayAreaJoe from California

O: Looks, smells, and taste like pineapples, one of the better West Coast single NEIPAs, terrific feature of Galaxy hops.

Pours a hazy yellow, 1/3" white head. Some cans within the same 6 pack, much less different batches, have a wide degree of inconsistency appearance wise, but nothing detrimental, just sometimes its bright yellow super hazy, sometimes its brass and deals with more clarity. Aroma is massively pineapple. Like, more than any other beer I've come across. More than Sculpin Pineapple even. Its no joke, the commercial tug job is totally on point here.

Taste is yummy, still comes off as sweet perception wise because of the Galaxy/pineapple notes. But its delicious and super bangable. There is a mild onion/garlic like imprint on the mouth feel, as if they cut this with some Summit hops (remember those?). Its totally complimentary somehow. Has enough of a bitter kick to keep it from being soupy flaked wheat nonsense. I really dig it, and even though its expensive ($4-5 per can) its totally a beer I would continue to repeatedly purchase when available.

Reviewed by amano_h from Oregon

4.53/5  rDev +4.4%
look: 4.5 | smell: 4.5 | taste: 4.5 | feel: 4.75 | overall: 4.5
This beer is probably the most New England of the NEIPAs I've tried from Fieldwork Brewing. Actually, this may be one of the most New England NEIPAs I've tried bar none. If "New England" were an Instagram filter the slider would probably go beyond the maximum setting and then cause your cell phone screen to crash in to a hazy screen of death.
⠀⠀⠀⠀⠀⠀
Under conventional definitions of "a New England IPA," a beer qualifies as a New England IPA if it is (1) a beer that is brewed in the style of an American IPA; (2) while expressing abnormally high amounts of hop-derived flavors and aroma; (3) despite the high amount of humulone content, does not imbue its drinker with an overly bitter impression, and; (4) sports a juicy, slick, sometimes creamy mouthfeel from the flaked oats addition to the malt bill.

Here Galaxy Juice does not imbue its drinker with an overly bitter impression despite the high humulone content because each sip leaves a crisp and dry sensation, repriming the tongue for yet another sip, as opposed to the astringent, harrowing aftertaste some extremely over-hopped examples of West Coast IPAs tend to exhibit.

Therefore Galaxy Juice qualifies as a New England IPA. And a well-executed example, at that.

Reviewed by Rocknrao from California

It's not bitter like an English ale, and it isn't the same kind of aromatic as a west coast IPA, but it's pungent and hoppy and really popular here at Toronado in SF.

Reviewed by mp12 from Vermont

Reviewed by HopDad from California

S: Tropical mango, papaya, guava with some citrus to it. Light biscuit with some dank. Subtle hops.

O: This is easily one of my top picks from Fieldwork. I see this as one of their signature brews. An incredible rendition of the NE Haze. I will continue to grab this one over and over again when it's available! Amazing work by the Fieldwork team! Highly recommended!

Reviewed by Megadog31 from California

A- A hazy golden straw color with a two finger with head.

O- A fantastic IPA, just as good as most of the other hazy/NE IPA I've had. Fieldwork is now officially on my radar.

Reviewed by NapaClancy from California

Reviewed by JISurfer from South Carolina