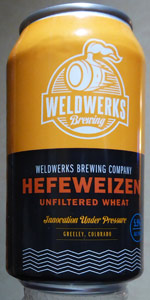 Notes: We start with a traditional German Hefeweizen recipe, using 50% wheat malt and 50% Pilsner malt. Without being too irreverent to the original style, we add our own creative spin, with a sizeable whirlpool hop addition and the use of an American-German yeast strain, which contributes the classic Hefeweizen banana character, but with a restrained spicy phenolic character, keeping the beer approachable while maintaining the complexity of a well-crafted wheat beer.
View: More Beers | Place Reviews
Recent ratings and reviews. | Log in to view more ratings + sorting options.

Comes in a hazy, translucent, burnt orange color with a small white head.

A: The beer is quite hazy yellow in color and appears to have a light to moderate amount of visible carbonation. It poured with a quarter finger high white head.
S: Light to moderate aromas of bananas from the yeast are present in the nose.
T: The taste has flavors of bananas with bits of cloves and wheat.
M: It feels light- to medium-bodied on the palate and has a moderate amount of carbonation.
O: This is a decent hefeweizen that has nice aromas and flavors of bananas from the yeast.

A nice tasting wheat beer but it didn't strike me as a German hefeweizen, primarily because of the lack of clove or banana aroma.

Pours a hazy amber color with fine-grained foam in the glass. Very light body with just a little malt. Lighter spice taste than a lot of Hefes but a pleasant dose of banana. Slightly bitter in the aftertaste. Overall this is a decent American-style hefe that's more flavorful than a typical American wheat. From the 12 oz can purchased at Wilbur's Total Beverage in Fort Collins.

The citrus in this wheat beer was a little overpowering. Perhaps more of the wheat characteristics I'm accustomed to would balance out the overall drink. The citrus and carbo was all front-palate, but it evaporated a little too quickly. Not bad.

TASTE & TEXTURE: Smooth, soft, wet, and medium-bodied, but unrefreshing. Has an unbecoming raw sweetness. The wheat doesn't have a fresh feel or presentation. Has a murky citrusy and floral hop profile. No banana or clove here at all.

The yeast doesn't capture a German yeast profile at all; I'd bet American was used.

This flavour profile just plain isn't consistent with the style's conventions. I'd like to see a traditional hefeweizen yeast used, the amount of wheat in the malt bill raised substantially, better hops selected, etc. With this much off about it, it needs a complete rethinking - mere recipe tweaking wouldn't suffice. That said, when regarded as an American wheat ale, it isn't as off (but it's still mediocre).

OVERALL: Nevermind competing with the best expressions of the style out of Germany - this can't even surpass Dry Dock's hefeweizen just down the highway. Drinkable but severely underwhelming. A deeply troubled attempt at a classic style that I would advise others to steer clear of, but not a faulty beer outside of style conventions.

Wheat meets overdone floral hop flavour in this imbalanced nontraditional ale. Fails to showcase its yeast well, and fails to nail the subtlety and delicate execution the style is known for - at least when it's done right.

A poor hefeweizen, but not a terrible beer outside style conventions. Drinks like a bastardized American pale wheat ale.

It's a drinkable stab at a hefeweizen. Weldwerks didn't overhop it or underplay the hefeweizen yeast (common follies when American breweries try at the style).

a darn good american made example of this style, really nicely done and quite traditional. lighter in looks and in feel than a lot of them though, its very mild, not super yellow or dense, although the haze is there, more of a lemon juice color than a wheaty gold. the head is tall and airy, lasting and pretty, and it smells excellent. very traditional yeast strain rocking here, banana and more of an anise than a clove thing, but the spice is there too, delicate and well behind the fruity aspects of it. its dry too, one of the drier ones i have had, really lets me taste the wheat malt in the right proportion with the yeast, which is my favorite part of this. almost has a lager crispness to it. carbonated really well, maybe a touch light on the body considering the rest of it is so delicate, but its really drinkable and easy on the palate, but fully flavored and really refreshing and delicious. nothing about it is super different or stand out in terms of flavor, but the quality here is through the roof. weldwerks coming in hot lately!

The brewery is only a bout a year old and their flagship is a hefe that's won some awards. L-let that since sink in for a second: a brewery that opened in the mid two thousand and teens specializes in a hefe! That's delightful.

I'm always on the lookout for something simple, and as this was highly reviewed I bought a growler.

Pours cloudy yellow with a nice head. Smells of bananas and cloves with some weird off nodes of musty fruit. Nothing too horribly offputting, but enough to kick it out of the ranks of elite hefes.

Tastes more traditional and balanced than it smells, but also not really exceptional. Smooth sweet wheatmalt up front, bananas and white pepper in the back, with a pleasant yeasty finish. The aroma's off nodes are thankfully not at all present in the flavor.

Hefeweizen from WeldWerks Brewing Co.
Beer rating: 86 out of 100 with 43 ratings