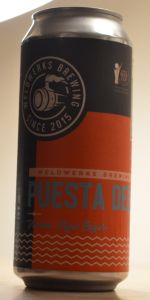 A-The beer is a good looking medium-amber brown in the glass. It is mostly clear and I can see just a bubble or two of carbonation. The head is tan and fades quickly from a finger in height to a thin film. Some stray lacing clings to the glass.

S-The aroma is grain forward with assertive notes of barley grain, husk, bread crust, and a light grassy hop kick. This beer is crying out for a lime.

T-The taste is similar to the smell. I notice grain flavors, some bread crust, and a light, grassy hop note. There is a bit of nuttiness in the malts, but the flavor dries out somewhat on the finish. It seems to be missing that hint of yeast that I associate with a Vienna lager.

M-The body is lighter in heft than some beers in this style with a higher than average volume of semi-crisp carbonation. It is drinkable and not overly filling.

O-This is a decent summertime beer and would go well with Mexican food as a stand-in for Corona or something. That being said, I would take a Negra Modelo instead.

Poured out a clear, amber color with an off-white head of foam. It smelled malty and sweet. Tasted sweet with notes of toffee, caramel and toasted malt.

you know a brewery is awesome when even their "boring" or less sexy styles are this good i continue to be impressed with every weldwerks beer not named juicy bits just as much as i am with their now famous ipa. this is a crystal clear, perfectly copper colored, fluffy tan headed radiant amber brew, lagered to near perfection, round and proportional and drinkable and autumnal, what more do you want in the style? smooth body, nice toasted nutty malt base with some of the characteristic european lager sweetness, but a pretty flavorful and hard working yeast strain that crisps this up a little more than most vienna style larger. a grassy hop note to balance in the finish, bread and toast underneath, a beautiful richness without too much residual sugar. fine carbonation, more body than normal, hearty even, just really dialed in. its not always the most exciting beer on the menu, but if you do not enjoy this beer, you do not enjoy vienna lager. this is about as good a version of the style as i have had from an american brewery.