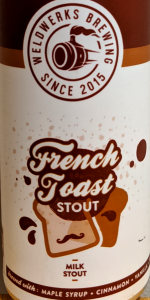 Notes: French Toast Stout, our latest #pastrystout, is a Milk Stout brewed with lactose, cinnamon sticks, vanilla beans and nearly a gallon of maple syrup per barrel. Decidedly sweet, yet surprisingly drinkable, French Toast Stout opens with a huge burst of maple syrup, lending way to caramel malt sweetness, a hint of bittersweet chocolate and coffee from the roasted malts, subtle, yet rich cinnamon spice from the Vietnamese cinnamon sticks, and just a hint of vanilla in the finish to round it all out. It’s breakfast in a glass, no fork needed.
View: More Beers | Place Reviews
Recent ratings and reviews. | Log in to view more ratings + sorting options.
4.35 by HopBelT from Belgium on Mar 15, 2020
4.25 by Elicoleman from Colorado on Jan 22, 2020
4.21 by adusso415 from Colorado on Jan 22, 2020
4 by jschott75 from Illinois on Jan 17, 2020
4.18 by Bandi from New York on Jan 12, 2020

A: The beer is essentially jet black in color; only traces of dark brown are visible near the corners of the glass when it is held up to a bright light. It poured with a quarter finger high tan head that died down, leaving a narrow collar around the edge of the glass.
S: Light to moderate aromas of maple syrup are present in the nose along with hints of cinnamon; these intensify as the beer warms up.
T: The taste is a little sweet and has lots of flavors of maple syrup with bits of cinnamon and vanilla.
M: It feels medium-bodied and a bit smooth on the palate with a moderate amount of carbonation.
O: I really enjoyed the taste of this beer, which tasted like French toast that is drenched with maple syrup. It is very drinkable as it wasn't too sweet.

Very dark brown with a decent head at first but it quickly dissipates.

Quite aromatic with cinnamon, syrup, and french toast.

Very flavorful and like breakfast in can. French toast is very apparent with syrup and cinnamon. Rich with slight chocolate and toffee.

Feel is where it needs to be - full bodied but on the lower end - maybe could be a bit thicker as it's a milk stout.

Overall a very good beer that really tastes like they stuffed bucketloads of french toast in the mash tun and then boiled it with tons of maple syrup. I prefer the coffee version of this one just a bit more but this one is really good.

This one pours a darkish brown/black color, with a big head, and a good amount of lacing.

This smells like dusty cinnamon, light bittersweet maple, chocolate, and a kind of weird staleness on the aroma.

This isn't all that good, unfortunately. It feels flat and slick, with a stale coffee type flavor. There's not enough maple here, to add some sweetness to block out the stale astringency. The cinnamon flavor is at least subtle - that's often overdone.

This is light bodied, thin, slick, and flat, with not a ton of carbonation. It's not all that drinkable.

This needs a lot of work to make it good. It has some potential, but the base beer itself is just so flabby and underthought.

Lush but drinkable, the WeldWerks team bring the character of french toast to pastry stout, but without the viscosity that we're accustomed to in these "pastry" stouts. But with maple, cinnamon, vanilla, chocolate and coffee, the surprisingly quaffable beer doesn't disappoint on depth of flavor.

Very dark brown, the stout shows a foggy, tawny bronze thread near its margins. Simply called French Toast Stout, the scant froth swirls like coffee creme while bringing a strong and caramelized nose of maple, coffee, chocolate, cinnamon and cream. Equally as savory, the taste opens with a burst of maple that seems to be slighted in scent. Toffee, caramel, pecan, praline and sweet cream roll onto the early palate with dessert-like effects.

A gradual shift to drinkability and dryness transpires over the middle palate. Its sweetness and density slowly lift and the beer's more coffee, pecan and toasted edges eventually overtake the sweetness. Cinnamon, nutmeg and vanilla offer its own spice and soothing flavors that bring balance to a taste of sweet cream and maple. Seeming like eggnog at times, the late palate turns slightly bitter with the char of coffee and campfire lingering slowly behind.

Full bodied but not nearly as lavish as imperial stout, a soft kahlua finish comes with the culmination of the most toasted edges of french toast for a taste that sells its promises well. Moderate enough to be drinkable, the beer extends onto the finish with coffee, cocoa and toasted maple and a strong breakfast-like afterglow.

Look: deep brownish black warns you that a high flavor, high alcohol beer is contained within. The head dissapates quickly to just a smattering.

Smell: maple and cinnamon forward, and then the full "french toast" concept hits once you bury your nose in while taking a sip.

Feel: a bit of an odd combo of syrupy thick and still feeling the carbonation.

Taste: I like the flavor. It is not a calm beer; the flavor punches hard. As far as a french toast taste, because of the alcohol level and a little bit of roast character, it tastes like slightly burnt french toast, with the cinnamon reminding me more of horchata cinnamon more than the cinnamon flavor that cooks into french toast.

Overall: I like Weldwerks, but to be honest a lot of their crazy stouts have been a bit too much. And I like audacious stouts and porters. But this one sits in a good zone if you're in the mood for a punchy sipping beer.

Big thanks to Jeff for this one. 16oz. can into Night Shift stemware. Shared with schen9303.

Nose is chocolate, maple, lactose and cocoa powder. The maple is prominent but I don't even know how you could get the aroma of bread into a stout. Beer opens cinnamon, maple syrup, chocolate and roasted malt. Holy crap... this actually tastes like French Toast... pretty amazing. Some brown sugar and more maple in the middle with a sweet, soft and rich end. Body is medium with moderate to low carbonation. Smooth and rich in the mouth and goes down easy with a messy, sticky aftertaste.

This beer impresses the heck out of me. It really tastes like French Toast with stout flavors drizzled over it. Super drinkable too. Wish I had more of this to show others!

16oz can, served in a snifter about two weeks after canning. Pours a dark black body, one finger thick mocha head, good retention, splotches of lacing all over. Smell is roasted barley evoking coffee beans and french toast, fair bit of sweet and sticky maple, light spices, caramel and a touch of lactose sweetness. I don't get so much vanilla, whether its marshmallow or darker fruit. Flavour is smooth caramel and maple sweetness, tempered by a nice toasted malt that evokes french toast, sort of that minimally burnt toast flavour; a bit of cinnamon and allspice, a bit of that slick vanilla sweetness that I could almost imagine to be butter, but not in a diacetyl manner at all. Mouthfeel is medium bodied, appropriate for 7% and the style. Lots of flavour, but a balanced breakfast in a glass. It's got a lot of flavour that comes together like.. surprise, a nicely fried french toast covered in maple syrup and given a dab of cinnamon would.