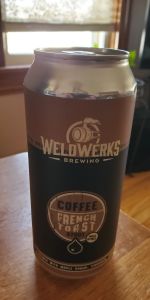 Nice aroma of cinnamon, maple and coffee. Really a nice even blend on the aroma.

The flavor follows with a bit more of a maple impression on the taste but still ample cinnamon and coffee.

Creamy body, and doesn't feel too rich despite the rich flavors exhibited. Not hot or sharply alcohol laden but has a touch of booziness to it.

I'm a maple guy so this hits the spot nicely....a touch of nougat or vanilla like notes blends in nicely. On the flavor the coffee is more subtle. Cinnamon adds just the right touch to the flavor.

Should have saved this for a camping trip. Would be a great way to start the day alongside a fire with some eggs and pancakes.

Upfront cinnamon and malt, some vanilla and maple mingle along with a hint of chocolate and coffee

Cinnamon dominates the palette, good maple and vanilla notes on the back end of the palate and a bitter coffee kicker

A little thin, slightly fizzy. Medium bodied, leaves a bit to be desired in umami.

Pretty decent, would have another.

Pours a dark mahogany color with a tan head. Smell is roasted coffee and maple with some roasted malts. A nicely balanced stout between coffee and maple not overly sweet. Mouth feel has all tastes present liked the infusion of maple on this one.

Dark brown in color with minimal light penetration. There's a fingernail of brown on top. I'm smelling dark roasted coffee and maple syrup. I'm tasting a hefty dose of maple syrup and very rich and dark coffee. The sweet and bitter blends together exceptionally well here. The mouth is dry, sticky, and chewy.

I was hoping to review more than one new beer today. Luckily, I now have time for #2. This is not a new brewery for me. In fact, it is my second milk stout from Weldwerks in as many night.

Look: The beer pours pitch black. A thick, densely packed, two finger light brown head sits atop the opaque liquid. As I start to write up the appearance of the beer, the head settles to a thin layer across the top. A thick, foamy ring around the edge and a lot of lacing on my glass. There is no visible carbonation.

Taste: The flavor is coffee forward. It is semi sweet with the slightly bitter and acidic coffee offset by some milk chocolate and sweet maple. The finish is semi-dry, nutty and cinnamon stick. Cinnamon spice as the beer warms up. Slight green bell pepper on the taste as well.

Overall: A nice homage to breakfast. Mainly coffee, but the other flavors manifest themselves to a degree. The cinnamon seemed non-existent to me at first, but as the beer warmed up the aroma and flavor of cinnamon began to shine as a little spicy.

Some bitterness and a green vegetal note. This is all good. An enjoyable beer. Not too sweet. Everything is evident and plays nicely together.

L - Dark as night, but with less head or lacing than I would have expected.
S - Like a dark night in a Quebec (maple)sugar shack, this has it. Roasty, toasty, and some cinnamon
T - Brings all the flavors together, coffee dominates with some roasted cinnamon and maple in the back palate as aftertaste.
Good mouth feel, good palate saturation, no real interference or "cloy" from the additional lactose ...nice.
O - a very solid breakfast-type stout. Not sure I could do more than one pint. But one at a time? Sure!

Pours a dark dark black with a small 1 finger head. Dissipates fairly quickly but stays active with some lacing/foam around the outside of the glass. Smells of sweet chocolate, slight maple syrup, and caramel - spices come through - coffee is apparent throughout while the others fade in and out. Huge blast of flavor with coffee and sweet chocolate and toffee. Maple syrup comes in strong with a decent amount -not too powerful- of cinnamon and vanilla. A hint of spirits come through. Feel is on the lower end for a milk stout but still full bodied. Overall an amazing complex brew here. It does seriously taste like you are eating a piece of french toast soaked in a coffee stout. I will be buying this regularly to have on hand - it is a good after dinner dessert beer.

Canned 9/5/18.
L: pours dark brown in color, not quite fully black. Coloring resembles a light roast black coffee. About a half of finger of a bubbly tan head which dissipates rapidly. Moderate amounts of residual lacing.
S: pretty much straight coffee initially. As I opened the can, the coffee aromas were strong. As it warms, I pick up on the cinnamon in addition to the coffee (coffee and cinnamon are dominant smells). Definite sweetness from the lactose, not picking up on much vanilla or maple. Nice smelling though.
T: loads of coffee initially and on the finish. A lot of roasted malt character as well, lending a chocolate-like flavor. The finish consists of coffee, cinnamon with a touch of vanilla. The lactose sweetness lingers in the mouth. As I let it warm more, I get more of the maple.
F: medium in body and light-medium in weight. Wish the Feel was a bit thicker, but it isn’t a deal breaker. The carbonation is low, which makes it feel heavier (a good thing imo).
O: wasn’t sure what to expect, but found myself enjoying it. At 7.1 AbV it’s an enjoyable breakfast-ish stout. It doesn’t stand out as French toast per say, but makes use of the adjuncts quite well. If the vanilla and maple were more pronounced with the coffee slightly scaled back, it might be more in the style of French toast tasting. Then again, it’s labeled as a coffee French toast stout. I would drink again, and I’m grateful to try.
Cheers all.

Nice enough in a 5oz sampler as part of a flight, but it'd prove a cloying chore to drink elsewise.