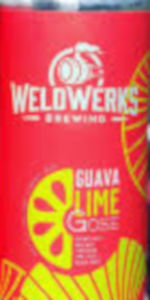 Initial impression from a can:

Looks well carbonated, but it's not a great appearance for a gose style ale if we're being fair.

AROMA: Briney sea salt, obvious lactobacillus sourness & twang, fresh genuine lime (not that sticky malt liquor lime extract aroma if you know what I mean), and fresh guava. The lime and guava aromatics alone are easily the best in their class, at least in terms of any beer I've experienced. I guess come to think of it I may never have actually had a guava fruited ale...just hops that are redolent of the tropical fruit. In any case, this is outstanding and suggests a mouthwateringly delicious gose with the ideal extent of salt and sour flavours intermingling with mellow tropical fruits and faint coriander seed.

Lovely across the board. Aromatic intensity is high for a 4.4% ABV gose.

TASTE & TEXTURE: The briney sea salt harmonizes wholly with the moderate sourness and its concomitant biting acidity. The crisp carbonation accentuates the intensity of the salt flavour, and inasmuch as salt's flavour can be pronounced, it is here (think pink Himalayan salt or the smoked salt you'd use in barbecue or Sel Noir fancy French restaurants utilize and you'd get an idea of the depth and diversity of salt flavour I'm referring to...this ain't your Mortons gose).

Lime feeds into the beer's welcome acidity while imbuing the beer with tropical flourish. Mellow yet equally fresh guava helps elevate this beer beyond gose's limitations as a style - reinheitsgebot be damned. Finishes salty and dry, encouraging the next sip be taken immediately.

As refreshing a beer as I can imagine drinking on a summer day, besting even pilsner or adjunct lager with its electrolytes/salt. Smooth, light-bodied, soft, perfectly carbonated.

Impeccably balanced. Despite gose's tendency to come across as a relatively simplistic beer, this expression is remarkably complex and varied in its flavours, yet manages to wrangle all of them into impossible cohesion and natural unity. A gestalt whole of a beer that exceeds the sum of its parts.

OVERALL: One of the best expressions of the style I've ever had, and amongst WeldWerk's best efforts regardless of style to date. I'd come to view them as a two trick pony between their fad-chasing IPAs and their often cloying pastry stouts, but this is evidence the brewers have more tricks up their sleeves than I'd given them credit for.

The best gose I've tried in ages, and the best beer I've had year to date. A must-try entry in the oft-neglected gose style.

The nose is lemon, lime, salt, and guava. Electric.

The taste follows, with a slight yellow Gatorade vibe. Zippy tartness. Lemon-lime, guava, and grapefruit. Hints of coriander and salt.

The mouthfeel is medium for the style with medium tartness.

Tangy, tropical, tantalizing, a strong flavor of margarita oozes from WeldWerks German styled sour, salty wheat ale with the help of guava and lime. So, the tastebuds can certainly take a trip to the beach even if the rest of you can't go.

And the individual fruits reveal themselves as guava, passionfruit, kiwi and honeydew for a tropical and orchard variety. But the blast of lime kick the flavors into the world of sangria and limeade. As the rounded salinity brings a savory component to the late palate, that full margarita taste takes full command. The tang of gooseberry, under ripened oranges and grapefruit round out the sour and slightly bitter taste.

Medium light and with a hint of sourdough looming in a short aftertaste, the clean, crisp and highly refreshing beer carries a high rate of drinkability for a full sherbet succulence and the thirst quenching refreshment of margarita even in a light bitter balance from citrus peels and a scant spice of gin.