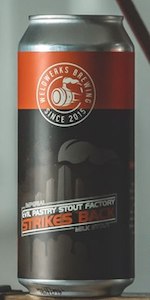 Bought a two pack of these, drank one, then went right back to the store the next day to pick up a second as a gift. I've had the second two pack in my fridge for over 3 months now. Found some other beers to make a mixed four pack of pints out of, so I get to drink another one of these now!

Figured I'd give it a review this time.

L: Poured heavy into a goblet, it produces a good finger of mocha latte colored foam, with a pitch black viscous body that light doesn't penetrate through more than a centimeter of.

T: The chocolate becomes semi-sweet on the palate, but otherwise it tastes exactly how it smells. Pretty sweet, so I would save it for dessert. I'd probably prefer it without lactose, but it's hard to tell.

F: Very thick, a little syrupy, but carbonated enough to keep it creamy. The lactose helps here as well.

O: Easily the yummiest milk stout I've ever had. Cheers!


Evil Pastry Stout Factory Strikes Back from WeldWerks Brewing Co.
Beer rating: 4.39 out of 5 with 5 ratings