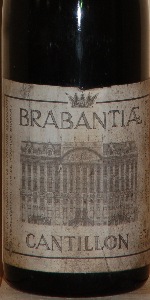 Brought from my home cellar to share it with my best-beer-friend Mario, after an Other Half can. This bottle was cellared for 4 years after being bottled on 2018.

Poured into a BrewDog snifter.

A: Body is light yellow with not that much solids as expected. Head is white but fades quickly.
S: The aroma is very mellowy and soft due to the port wine barrels. It brings you memories of molasses, honey, yellow sugar, lighter fruits jams. The funkiness, though present, is way too faded.
T: The taste is very interesting as the sharp edges of a Geuze are now a lot rounder due to the residual sugars that a port wine barrel aging inputs to a beer.
M: Body-wise, it's light - not as light as a regular Gueuze for that matter but it's still very drinkable, soft but with a light acidity kick.
O: Would love to have this once again in the future. Not sure how am I going to do that.

Pours a deep golden, bordering on amber, touch of redness to it. Nice creamy head as well. The aromas of red pepper, funk, and lacticity are all there coupled with a subtle hint of sweetness from, I'd assume, the port barrels. It's got the funk you'd expect from a Cantillon, but not as much of that red pepper, it's less sharp or acidic. It's got kind of cherry pie undercurrent that provides both sweetness and tartness. There's some wine barrel oaky tannins as well. In some ways, this errs flavor profile wise more towards an Oud Bruin or Flanders Red without any of that harsh acidity or major cider notes. It does in a subtle way. In the best way, this is so unique. I really enjoyed this.

2018 vintage. Generously shared by my bro at Thanksgiving. I am truly thankful to try this beer. Plenty of cantillon funk. Lemon. Hay. Port on the finish. Tastes young. A delight but I’d suggest cellaring this beer for several more years.

A perfect amber, starting off chill fogged but calming to translucent, with a moderate but dense white cap that retains well for a short period, slowly settling into a fine bubbly collar.

Taste continues that unique-to-Cantillon character, and revisiting the nose, I realize this is the toasty, nutty character of the Port wine barrel. The barrel adds a uniquely mature, bitter element to the fluffy, medium-full body, which comes to a softly, cleanly dry finish that is impressively delicate.

Aside from those barrel notes, which also bring hints of amaretto, the primary experience--which I seemed to have glossed over--is a lightly tart grapefruit-orange gueuzeyness with very low acidity and minimal funk. It's a deilghtful lambic and probably my favorite non-fruited Cantillon thus far.

The new batch, absolutely special gueuze right out of the gate

Gueuze aged in Port barrels. Spirit aroma, Cantillon minerality, flavors of wine but not necessarily grapes if that makes any sense. Got better and better as it opened up.

Pours a saturated, glowing, yellow to golden color with no head at all, since this is entirely flat.

Smells of burned, charred barrels with an ancient fruit layer wafting into the nostrils, reminding of the heavy bodied wine it once held. There is a subtle, honeyed, leathery funkiness atop, adding just a subtle sour hint to the nose.

Drinks soft, fairly light bodied, almost watery if it wasn‘t for the ongoing sourness in this.

Tastes of honey rubbed barnyard funk with an extra portion of moldy wood branches, which have been cut down a long time ago, but got long forgotten in a humid environment. A note of dried mushrooms settles in afterwards, as well as a hint of lighter cream cheese. Then there is a watery dullness, which just won‘t evolve on the palate at all, which is unusual in a lambic and unfortunate at the same time.

This does just not suffice, as it is too one dimensional on the palate. Neither does it head into an AWA direction, nor is it convincing by its subtleness, it just misses depth of flavor.

1991 bottle that I got in a trade. Cap was rusted, cork completely dissolved. Decanted it. Color was a deep orange-bronze and very clear except the part that was left in the bottle, which was gross looking. Very oxidized, musty aroma, old books, lemon, wet wood with a bit of rot in it, leather, peaches. Body was very oily, flat, silky smooth, full. Favor less musty than the nose, some honey, lemon, leather, old books, wood, cork. This definitely was past it prime, and I suppose I should have opened it when I first got it, but still it has help up remarkably well for a 26 year old gueuze. I look forward to trying the new one in 2019.

Bottle shared at Moeder Lambic cellar. Very exciting to try this one as I had been teased by Jean-Pierre van Roy about it but never been able to sample some. So Thx Bart!
A: Very dirty look. orange with lots of sediments. The head is really impressive. Thick foam, creamy.
S: Smell is musty, dusty and a little bit oxydized, but not that much for such an old beer. Funk, mushrooms and wet wood in the nose, typical of an old Cantillon. No cardboard oxydation however. Port flavors at the end, wine, cherries and grapes, a little bit subdued.
T: Very sour. Musty, old basement flavors. Not so much port actually. Reminiscent of old 3F oude geuze vintage (reminds me of the first bottle of 2002 OGV I have had). Quite juicy with mineral qualities.
M: Puckering acidity. Still well carbonated.
O: Very interesting? The port is not obvious but this has aged well.