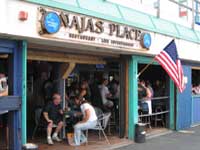 View: Place Reviews
Reviews: 83 | Ratings: 112 | Log in to view all ratings and sort
Reviews by EdTheEdge:

Been here multiple times! Love their finger foods must admit they have a large selection of beer on tap! They do have a juke box in which you can put music; television screens to watch the games, and during the weekends live bands.

One of the best bars I have been to in terms of craft beer selection. Unbelievable actually. Service is not the best, but the location and selection is fantastic.

Good place for a non-drinker to take their beer connoisseur friends from Pariguay.

Selection should be a 6.0 for this place. Best beer joint in the state.

Went during LABW for the FSW tapping event they had. Waited 3 hours in a overly crowded dive bar that had reggae music blasting so loud I could barely have a conversation with the people I was with. The lines were long and apparently they couldnt figure out how to tap the special beer that day. I went back n forth about 10 times constantly kept asking while in a line just to try the beer and one the guys just kept telling me "Bro, youll know its tapped when we announce it"..Well I gave up and on my way out of leaving, find out they tapped the beer and told no one..how thoughtful of you guys seriously. I got what was left in a pitcher prolly half a pints worth and it wasnt worth the hassle. I will not be coming back here for any event they have.

Stopped by a few beers while in Torrance on business.

Had a blast! Great beer selection, though they said it was down due to preparing for the an upcoming beer fest. Live band on the inside; the harbor, beautiful sunny day and fishing boats right outside the windows. Grabbed a Port Swami to begin with, then asked the boys behind the bar what I would like that I couldn't get at home similar to the Sculpin and Wesy Coast IPA they also had on the board. He said Dirt Wolf not knowing I was from PA!

Low and behold they had Pliney!! Was not listed on the board, but they readily volunteered it. Made my day!