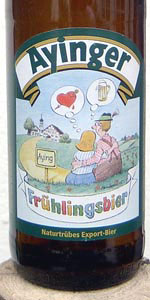 Rated by bhaugh20 from Ireland

A month in the bottle, and that makes all the difference.
The malts are fresh-out-of-the-oven light, the hops are some of the most nuanced I've ever had from Noble German (my guess is Hallertauer Mittelfruh), and the body is so feathery it's barely there.
Slides down sip after sip. I had a Staropramen earlier; it looks like Mickey's Widemouth next to this. Embodies why people love lager, and they don't even know it.

If this is what drinking landsbier is like fresh on tap in Germany, book my flights.

Reviewed by jonb5 from England

O: Well made beer from a good brewery that never disappoints.

Reviewed by Steve555 from Wales

T and F - Malt, yeast and hops all come through real tasty, some mineral content that adds volume but is in no way cloying or salty. Very tasty and refreshing. A great beer from a great brewery.

Reviewed by vitALEity from California

4.43/5  rDev +13.3%
look: 5 | smell: 4.5 | taste: 4.5 | feel: 4 | overall: 4.25
Pours a slightly hazy light yellow with some head that dissipates quickly into a frothy ring. Lots of bubbles rising in the glass. If it was poured into a wine glass I might think it was a white wine with extra head. Anyway, aroma is very nice. Its a German hell but it has all these nice subtly floral and fruit and spice notes. Very approachable. Mouth feel is relatively smooth and flavor is a super clean and balanced pale lager with extra floral notes. Some stone fruit in there too. Nothing bready about it so Im not sure how people are tasting bready in this. Its a very nice spring beer.
May 23, 2020

The smell is smooth with distinct notes of fresh white bread. Some herbs and a touch of sulphur that I guess comes from the yeast. Sweet floral notes in the background.

The taste is smooth and highly balanced with fresh French loaf, buttercups and other fresh flowers, just a hint of herbal bitterness and just a slight hint of butter. Light to medium body. Some clean alcohol in the aftertaste as well as some sulphur and gunpowder. Buttercups and other flowers in the finish.

The carbonation is light, the many small bubbles smooth and long-lived. The liquid is semi-smooth.

Reading the review, one could get the impression that this beer is all over the place. But not at all, all flavours are rather subtle and extremely balanced.

Smell is clean, bready and floral with a hint of yeast and a bit of herb to it.

Taste is bready and yeasty, very clean and balanced with grassy, floral bitterness. Very refreshing and easy to drink, yet not boring.

Reviewed by KooVee from Finland

Look is hazy, light yellow. Much like a witbier, which is surprising for the style. Maybe the reason the pub also serves the beer from a hefeweizen glass. Head is negligible but could also be poor pouring.

Nose is a slight bit of honey on top of raw grain. I would not call it bready, the aroma is too coarse.

Taste is watery but ending with a medium bitterness. Not much malt, but there is a slight tartness which I guess was the intention. Or I hope so. Yeasty notes. Overall I feel like I am sipping a technical failure / lager that has been poured from the vat while the process was still unfinished. I like kellerbier, zwickel etc, but this one is just too raw and crude.

A kiss of subtle spice/clove from the yeast. No fruity esters, though.

Highly drinkable and enjoyable. Another solid brew from one of Munich's best breweries. Yeah it's dear at 4.60 a pint, but sure it's worth a go once. The carbonation is way too high, though.

Reviewed by Silke_Neryn from Sweden

It's extremely refreshing, smooth and slightly creamy on the tongue.

A shame I didn't buy more.

Reviewed by markleyc06 from Pennsylvania

T- upfront noble hop flavor that is very balanced but assertive. Then a very earthy malty finish that lingers.

O- my favorite beer I had in Germany and it really does deserve every bit of a perfect rating.

T: Follows the taste, but a bit bitter and more citric. The breadyness is stronger than the banana.

M: Light body and rich carbonation. Aftertaste is rather short.

It pours a hazy whitesh gold, much like a Berlinner Weisse or witbier. The head is white and fluffy but leaves no lacing.

It smells really fresh and inviting. It is lightly bready with some honey sweetness, lightly fruity, with a springy hop note.

The flavor is a bit tart. It is lemony and fruity with a slight bit of hop bitterness. The finish has some earthy fruitiness. Overall it seems to just wisps across the tongue. It isn't light Per se but the mouthfeel is very smooth velvety.

It is a good pick for a spring or summer beer for sure.

Reviewed by czfreeman from California

4.12/5  rDev +5.4%
look: 4 | smell: 4.5 | taste: 4 | feel: 4 | overall: 4
Found this on the shelf at the downtown Munich Reve grocery, apparently the only bottle the store received by mistake. Mine! Surprisingly enough, I saw more Ayinger Stateside than in Munich.
Upon R&D every description categorizes this brew as a Keller Bier, not a Berliner Weiss. I'll let the tasting make the decision.
Pours a slightly murky golden tone, lots of carbonation. The main selling point of this brew is a extremely light delicate, yet full fluffy head the consistency of cotton. Quite a nice looking brew. I've seen Keller Beers that look exactly like this as well as Berliner Weiss. The mystery continues...
Onto the aromatics. A tart musty lemony aroma greets my nose. a bit of yeast funk, fresh grain, toasted bread,overripe pears, Meyer lemon, finishing with a musty grain/fresh citrus combo that is extremely enjoyable. A buttery note rounds out aroma. I could smell this all day long. This is really nice stuff especially after a winter of overly sweet German bock/dunkles It's musty and funky enough to be a Keller bier, yet the lemon acidity immediately recall Berliner Kindl Weiss.
Light, delicate and tart on the palate. Lemon, grain, yet rounded out by a slightly buttery character The carbonation is cleansing and finishes the brew with a light tongue tingling acidity. The mustiness i more dominant than in other Berliner Weiss beers I've had, and this leans in the Keller bier category. Highly enjoyable light brew. Unfortunately the aroma is several notches higher in power than the flavor.
After having the house Kellerbier at the Ayinger Brewery several months back, reflecting on my flavor impressions make this brew the spring version of the summer standard. The acidity is high enough to be a Berliner, but the musty yeasty grain-like complexity take this to a different level. No matter what you call it, or whose Keller you get it from, its still a highly drinkable, light, refreshing brew. I am convinced once again Aying can make no mistakes. Shame I snagged the only one

Mar 17, 2010
Ayinger Frühlingsbier from Ayinger Privatbrauerei
Beer rating: 88 out of 100 with 28 ratings