It's A Blond
Brouwerij Kees 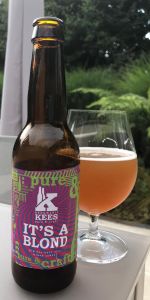 Notes:
View: Beers
Reviews: 2 | Ratings: 5 | Log in to view all ratings and sort
Reviews by Spike:

This blond comes nowadays (2021) in cans as do all of Kees' beers. First this beer was a bit of an odd child in this brewery focusing on American and British beer styles, but it made its stay certainly on the Dutch home market, where many people like their Berlgian Blondes and Tripels. However, this is clearly Kees' own interpretation of the style.
Unlike a real Belgian Blonde this beer is rather deep golden leaning towards copper and the head is rather normal and not as fluffy as and thick.
Smell is clearly Belgian yeast character certainly in a pleasant restrained way. Both the peppery and fruity notes are there. Fruit a bit stronger and can be identified as banana. not overripe and not green just spot on. You probably don't know what I am talking about, but there is a sweet called Schokobanane (from Cassali) which is made of a banana pulb with some aditives that give it texture and coated in chocolate. Peel the chocolate away and that's the smell.
The beer ends on a strong note of dry bitterness like in a Westmalle but with much less alcohol, but before that there is a malty note too and thats toasty sweetness (just a little browned definitely not burned) and nutty. The fuity flavor gives you the impression of sweetness, but this is probably deceiving. The aformentioned bombastic dry-bitter ending would not allow for much residual sugars.
Carbonation is prickly and fine but less than in a e.g. Duvel or Westmalle. The body is medium just appropriate.
This is a very drinkable take on a Belgian Blonde by Kees. With 5.9% alcohol it is much lower than all of the Belgian Blondes that I know and with its strong bitterness it is very drinkable.
He calls this beer an American Blonde. I believe this just marketing. It is clearly a Belgian, but with an innovative twist. That does not make it American. Belgians are innovators too.