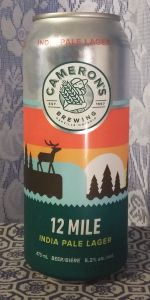 midair from Canada (ON)

Pours a translucent yellow-blonde colour, with two fingers of soapy white foam initially erupting from the surface. It fizzles out continuously, fading totally by the 5 minute mark; in its wake, there remains a wide, frothy collar and several splashes of sponge print lacing. Looks good, but there is a lot of sediment at the bottom of the can. Lemony citrus zest, floral hops and pine on the nose, with clean, pale grainy barley malts. Nothing out of the ordinary for an IPL, or ISA for that matter.

Taste follows the aroma - grainy, crackery pale malts serve as a backbone, along with hints of stone fruit - but the hops steal the show early on. Citrusy orange and lemon flavours come through early, preluding the floral, grassy bitter notes featured in the latter half of the sip. Light in body, with assertive carbonation and a prickly, lively mouthfeel and crisp texture. Super-refreshing, and every bit as drinkable as some of those so-called 'session' beers, despite the 5.2%.

Final Grade: 4.03, an A-. Cameron's 12 Mile IPL is perfectly suited for the oppressively hot summer weather we've suffered through in these parts over the course of this July - with a clean, grainy pale lager backbone underneath some fresh, zippy North American hop flavours. It's not a novel combo, but if it works, then it works. Not much more bitter than your average APA, but this one has a good, measured hop kick that outdoes a lot of the other Ontario IPLs I've tried. Quality stuff that will provide some stiff competition for established hoppy lagers like Hops & Bolts, as well as ISAs like Detour, et al.

Can from the lcbo for around $3.

I had this from a standard Canadian 473 ml tall boy can. The beer is hoppy like a session IPA. I've had boozier IPLs that seem more like full-on IPAs. In any case, this is definitely a better brew than some of the low abv IPAs that I've had while living here. It's a tasty hop.

Straw and hazy with no carbonation, and one finger of foamy, white head.

I'll have to keep this short...I like the idea of IPLs but to date have only found a couple I really like. Unfortunately for 12 mile, it's not one of them. It just seems too sweet and not hoppy enough for my liking.

After the barf inducing experience with Cameron's Captain's Log, I was more than worried about this one. To say nothing about the utter failure of about 90% of Canadian IPAs.
The pour and nose were a pleasant surprise but of course the taste was the ultimate test. At first try, I didn't hate it - it is an IPA. But the hop(s) tasted somewhat dirty, almost fungus like.
The more I drank this beer, the more I distanced myself from it, but at least I finished it. Not a complete disaster, but these guys are as far away from quality IPAs, as their name suggests.

Quite bitter for a lager

Pours a nice saopy inch head, golden hazy straw hue. On the nose there are hints of hops and pine. The beer also has a floral-like smell. Taste is crisp with flavours of lemongrass, pine, lemon zest, Light-bodied but a very sessional beer to enjoy on the summer patio.

Can: pours a pale gold with a small 1 finger cap that reduces to a surface lace and laces the glass....aromas of bready malts and piney-citrus hopping....mellow rounded mouthfeel hoppy-malty fluid character...flavor is well balanced in front with malts and juicy resinous hops then goes to a long increasingly bitter wet finish....very much like a lager dry hopped with IPA west coast hops...delicious

473ml can served fairly cold into a pint glass. LCBO purchase for around $3.20 CDN. Realized I've walked past this so many times. Thanks to Marc for suggesting it.

Appearance- Clear golden color with a nice bubbly visage. Two fingers of loose white head are poured, a good chunk of that stays around for a while and some curtain lacing at the edges of the glass.

Smell - Clean and grainy but also with a medley of west coast style hops. Citrus with a twinge of pine mixed in. Very aromatic lager.

Taste - Clean with citrus and earthy pine notes coming to the front. Lemon and grapefruit lead the charge, before backing off into a slightly sweeter second half. Good depth of flavor.

Mouthfeel - Medium-light bodied, good crisp carbonation and initially a bit juicy before drying out some. Maybe a bit on the gassy side.

Overall - A very good IPL or whatever they want to call it. Good depth of flavor, robust but not overpowering and easily drinkable. I will certainly enjoy another at a later date.