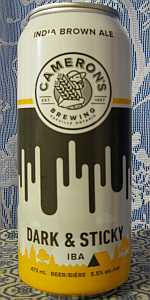 Looks good, substantial head that settles to a good cap, plenty of lace. Dark walnut colour. Smells of dark fruits, offers just a whiff of malt and chocolate. Taste is dominated by treacly malt, not alot of anything else there, maybe a suggestion of chocolate. Bit of a let down. Drinkable, but ordinary.

Cameron's never disappoints: they make consistently bad beer. I believe that this is a talent.
This work of barf is another drain pour, as most of their brew I have tasted, has been.
You can admire the colour (or not) for a while, but you will eventually have to take a whiff. And in this case, your nasal cavity will be overwhelmed with dirty dish water.
Appetizing.
Then you taste it and have to almost yell out, "oh, c'mon!...how on earth can you make a beer so bad...again?".
But they can. And they do. Consistently.

Looks like a cola, though the head shows a bit of lace.

Aroma of piny resin, roasted nut and a hint of cocoa.

Taste echos the aroma, with a cola-like sweetness.

Mouthfeel is oddly a bit sweet, but also a bit thin.

473 mL can from the LCBO; one of four included in Cameron's latest Brewmaster's Selection mixed pack. Stamped J2717, which I must assume corresponds to a canning date of Sept 27 2017. Served slightly chilled.

Pours dark as advertised, capped off by one centimetre of loose, soapy, beige-coloured head that fails to persist for more than a minute or two. I don't know if the term 'brown' does this beer's hue justice, as its actual shade is encroaching upon outright blackness - though holding it up to the lamp does reveal some dark crimson red tinges, as well. After the head has fully dissipated, only a modest collar of creamy-looking foam has managed to hold its ground, along with a decent swath of lacing. Big notes of pithy grapefruit citrus come through on the nose, as does a floral, earthy, pine resin quality that nicely complements the underlying dark malts, which give off hints of rye bread and prune/plum. Faint suggestions of coffee grounds and pineapple.

A well-rounded IBA - it's quite hoppy, but the malts do an adequate job of counteracting their bitterness. Toffee, rye bread and toasted grains come through, with a 'roastier' character than I'd have expected from a brown ale - just an observation, not a gripe. Light hints of pineapple and coffee crop up by mid-sip; grapefruit pith is also present, but it's largely overrun by the earthy, pine resin bitterness that dominates the tail end of the sip. Finishes with an herbal, floral quality and then a bitter, roasty note in the aftertaste that lingers on the tongue for a few moments. Medium-bodied, with moderate carbonation levels that provide a proper, crisp bite to the mouthfeel. Most hopheads should find this to be pretty drinkable, possibly even sessionable.

Final Grade: 3.95, a B+. Dark & Sticky IBA is easily the most intensely-flavoured of the four beers in this sampler, as well as the hoppiest by far. In fact, it's probably the hoppiest product that Cameron's has released to date, with the only exception I can think of being their Rye Pale Ale - which I am pretty sure has been discontinued. If that's the case, then at least this IBA will help to fill the gap in their portfolio that RPA's absence has left behind. Good stuff.