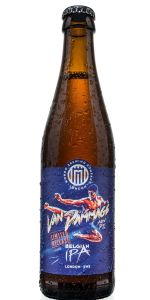 A: Poured into an IPA glass. Bottle conditioned. A rich amber hue with faint haze and good carbonation. Produces a large head of creamy white foam that lasts for a few minutes before settling as a surface layer. Some lacing.

O: So-so; the Belgian character is certainly present but the IPA not so much. Looks alright, while the aroma and flavour are dominated by Belgian yeast notes and malt. The hops are very much in the back seat. Body is OK. I'm not sure if this beer is supposed to be insipid or if it's just old (as mentioned initially). It's drinkable enough but doesn't really meet expectations. No need to hunt it down.