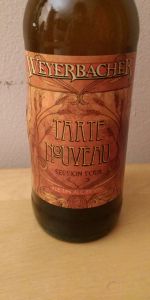 3.5/5  rDev -3.8%
look: 3.5 | smell: 3.5 | taste: 3.5 | feel: 3.5 | overall: 3.5
The appearance was a semi-hazy yellow color with a one finger white foamy head that dissipated within less than 20 seconds. No lacing surrounded the edges of the glass whatsoever. The smell had a sharp tart citrus with a slight sour apple element underneath. The taste was mainly sour with a slight refreshing citrus aftertaste and no finish. On the palate, this one sat about a light on the body with a really great sessionability about it. The carbonation was definitely there - sharp. Overall, I think Weyerbacher did what they wanted to do, a session sour ale, definitely for the sour ale fan.
Jun 24, 2017

Smell: Funky green apple tones with a hint of caramel

Taste: Acetic from the outset, with green apple tones dominant from start to finish

Overall; Almost a year old and perhaps that has had an impact but this is a rather disappointing beer

From the bottle: "Session Sour".

Having Pop!ped the cap, I went with a fairly heavy-handed pour since it is a fresh bottle & there was no flocculate or lees visible. The head was as fizzy as pop, but I still managed to get a brief two fingers of light-tan head before it reduced to wisps. Color was Golden-Amber (SRM = > 5, < 7) with NE-quality clarity, enticing a visit from the Gelt Gang of Mammon, Midas & Croesus. Nose had a sharp sourness, like milk gone bad or cheese in an early stage of fermentation. Mouthfeel was soft, not thin per se, but very unobtrusive. The taste was quite tart, as advertised. Vinegar was the first thing that came to mind, followed by lemons and sour cherries, but offset by a crackery maltiness. I also began to taste green apples and pears as my eyes watered a little bit. This style is not my favorite, by any means, but this was pleasant enough. Finish was quite dry, akin to a white wine in terms of its tartness. It was good & I also have the Blood Orange version, but one was enough for me.

Pours a clear barley golden, coarse white bubbles create a brief head that dissipates to little more than a ring.

Medium body with stinging carbonation on the roof of the mouth.

The weakest part of this beer is the pour, which is very boring. Beyond that, it's a solid sour ale with some good notes reminiscent of Flemish sours. The vinegar flavor and crisp poppy body in particular are good representations of the style. Worth trying.

T/F: Tart and funky but not much of a pucker. Flavors are lemon and pear mixed with vinegar. Some wheat in the background. Very light... almost watery, but given the very low ABV this makes sense. Low carbonation. Finish is dry.

O: For what it is.. a sessionable sour that you could literally drink all day... it's not half bad. Doesn't compare to some of the 'real' sours, but again... for what they were aiming for I think that Weyerbacher mostly hit the mark.