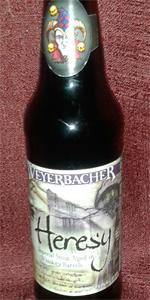 Notes: We take our Old Heathen and age it in oak bourbon barrels. The result is our silky smooth Heresy, 8% ABV. The aroma is filled with vanilla, cocoa and roasted coffee. Notes of oak, whiskey, roasted barley and vanilla dance across your taste buds.
View: More Beers | Place Reviews
Recent ratings and reviews. | Log in to view more ratings + sorting options.
Rated: 4.04 by NolaHopHead from Louisiana

Reviewed by StoneTSR from Colorado

3.92/5  rDev -0.5%
look: 4.5 | smell: 3 | taste: 4.25 | feel: 3.75 | overall: 4.25
A: Phone flashlight test allow zero light through. The mocha-colored head is larger than expected given the age of this beer, it was purchased in Lincoln, Nebraska in 2012. About a half an inch swells up with a variety of bubble sizes, which settle into about half the surface of beer being covered with an extremely thin layer of foam that looks like a map. The inky, blackness looks like motor oil underneath. Again, a bit of a surprise, but lacing does adorn the backside of the glass as the beer goes down.

S; Dark chocolate and a light, coffee roast are all that's left on the nose. If I strain, I can get a touch of vanilla. Not very aggressive anymore.

T: Still delicious. Ironic? No, maybe coincidental is more accurate, that it tastes like Hershey's Dark Chocolate. There's a mild, black coffee flavor underneath along with a touch of vanilla. When the beer was first poured there was a little bit of that Cheri note from an overly ripe beer, but after a few sips it goes away and some wonderful flavors, already described above, become more intense.

M: Carbonation is minimal, but present and noticeable. While I would expect sweetness in this big, bourbon, barrel-aged Stout with some age on it, it's actually pretty dry. The roast and dark chocolate combine for a nice bitterness, especially on the end, that keeps you wanting to come back for that next sip.

O: This one aged very gracefully. I should have consumed this a few years ago, but it got lost in the back of the cellar and didn't happen until now. Still, it's gorgeous. Wayerbacher always comes through for me...even when I don't come through for them. My grading will be done with an acknowledgement of age in mind.


A:
This beer pours a thick pitch black with three fingers of very active brown head that immediately settles to a ring around glass leaving no lacing.

T:
The flavor follows with rich, sweet malt roast flavors with some dark fruits and nutty roast flavors, vanillins, oak, really mellow whiskey notes (almost like what you get out of cooking with whiskey), kind of a vinous quality to it.

O:
A nice beer that has aged gracefully. It is very nice to sip on and see how it warms up. It is neither super roasty nor super whiskey-ey. There is a nice brown sugar sweetness on top of mellow whiskey, faint dark fruits and a little touch of oxidation that I actually think added to it a little. This was a nice beer. I like how restrained it was and enjoyed the fruitiness from the yeast (something I'm usually not huge on in a stout).

A beautifully dark almost black beer with a dark tan head, little staying power and no lacing. I was very impressed with the smell, it was sweet, boozy, and just a touch of hops to the nose. Where the smell was impressive the feel was less than stellar. It was an experience in astringent-ness...Nonetheless, the taste was very flavorful, and overall I found it to be another good offering from the Weyerbacher stable.

3.5/5  rDev -11.2%
look: 3.5 | smell: 3.5 | taste: 3.5 | feel: 3.5 | overall: 3.5
This was poured into a snifter. The appearance was a dark brown close to black color with a slim finger’s worth of tan to off white foamy head that dissipated within less than about forty seconds. Slim clingy slightly foamy lacing roams around the glass nicely. The smell starts with rich dark fruits with a good amount of rich sweet milk chocolate and bitter dark chocolate. All three meld really nice. A dry sweet semi-chocolatey aftertaste runs into the finish. On the palate, this one sat about a medium on the body with a fairly decent sipping quality about it. Carbonation comes across really nice and low. The dryness hits my tongue the hardest but not overbearing. Overall, this was a pretty good Russian Imperial Stout but not a lot of whiskey barrel shows up. Maybe it was my timing but I wouldn’t mind trying again fresher.
Jun 24, 2017

Reviewed by Shade1951 from Pennsylvania

I like the oil-black color. The head dissipates very quickly, leaving the glass looking as if there's ice coffee in it. I really had to work at getting the smell. I had to angle the glass just right against my nose and inhale deeply. I did get some fragrance of the barrel with tones of bourbon. I would have preferred more on the nose.

The taste definitely provides some bourbon, along with hints of... maybe cocoa and leather. It's solid, if not very memorable. The feel is rather creamy - nice - but just a bit under carbonated for my taste. Maybe that's the style? I don't know - but I've had Imperials that were tasty and creamy but with more pizzazz.

This offering from the brewery is fine. I prefer Old Heathen, though.

3.13/5  rDev -20.6%
look: 3.75 | smell: 4.5 | taste: 2.5 | feel: 2.75 | overall: 2.75
Heresy is an effervescent, nigh-impenetrably black beer with sullen orange footlights and a large, brief-lived, slightly pebbly brown head that leaves scant spots of lacing. The nose is a lying harbinger of great things to come: a medium-big aroma that leads with ephemeral whiskey notes that are quickly overtaken by a tasty blend of butterscotch, light-complected caramel, and hints of toffee and toast, all topped by moderate alcohol overtones. The palate leads with a whiskey character that is as assertive as it is fleeting on the nose. The absence of the full, sweet midrange and low-end flavors characteristic of bourbon make me wonder what type of barrels were used for aging; the flatness/evenness of the flavor profile from top to bottom is much more suggestive of Canadian whisky. This flavor is not too strong, nor overbearing, but it somehow manages to completely overshadow the dark malt character of the base beer, leaving it no more differentiated nor strongly expressed than would be the case in an average Schwarzbier. In fact, that is a perfect description of how this beer tastes: an anonymous Schwarzbier mixed with the dregs of a Cutty Sark on the rocks. The finish is a modest hit of whiskey and dark malt, and is somewhat warming; the linger is a watery whiskey flavor that lasts for a few minutes. Mouthfeel is watery as well, and is thin for the full body; the texture is slightly creamy and very slightly peppery from the underexpressed carbonation. Unfortunately, this beer is incapable of acting like an imperial stout, and has allowed the barrel treatment to get the upper hand, completely losing its soul in the process. (12 oz bottle, 116 days after pkg)
Mar 05, 2017

Reviewed by scotorum from Massachusetts

We get this brewer's products but this is the first time I've seen this one in my state, although I'd seen it occasionally in the state next door and regretted not buying some. Surprised to find it since it's supposed to be retired.

Poured from the 12 oz. bottle into a Samuel Smith English nonick.

a: Opaque black with slight ruby hints at the bottom, tan inch thick head receded slowly to even surface foam and a little patchy/spotty lacing.

o; Love their Insanity BBA barleywine but this is rather weak and thin feeling for an imperial stout. The booze flavor carries it.

Aroma - Whiskey and chocolate are up front. Roasted malts and hints of vanilla, nutty finish.

Taste - Whiskey and chocolate forward much like the aroma. The flavor of the whiskey is there but not the strong alcohol that usually accompanies, vanilla and roasted malts as well.

Feel - Very smooth and velvet like well carbonated sight burn from the alcohol.

4.1/5  rDev +4.1%
look: 4 | smell: 4 | taste: 4.25 | feel: 4 | overall: 4
Bottled on 10/21/16. Poured into tulip glass on 1/11/17. Pours black with 1/2" tan head that fades quickly. Aroma has light roasted notes and light whiskey notes. Not an overpowering amount of whiskey, which is refreshing. Taste is mostly whiskey, but not excessive, the imperial stout side is background player, but the overall effect is tasty. Feel is somewhat silky but not great for an imperial stout. Overall, a nice take on a whiskey barrel aged brew.
Jan 12, 2017

The feel is very carbonated, yet still smooth. Hot booziness up the middle that continues the burn to the finish.

Overall, this was much better than I thought it would be. I was expecting a whiskey bomb and what I got was some real nice chocolate notes, coffee, and a polite whiskey character. I'll be buying more of this soon.

Reviewed by citizencane from Pennsylvania

Reviewed by ThrewRedButter from Massachusetts

T - Bourbon/whiskey up front with the dark chocolate right after. Cherries, plums, and raisins, a lot of oak and a burnt coffee ground taste

F - A little thin, but not too bad. Feels lighter than an 8% BA stout.

O - Not bad, but not amazing. A perfectly standards BA RIS.