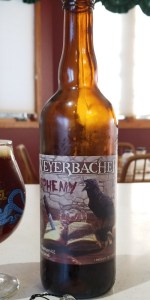 Thanks to Matt from the Beer Yard for this sample.I have been waiting to try this beer for a while and didnt want to take my bottle from the cellar but thankfully I got another bottle and so heres how it goes...Poured into a wide mouthed wine glass.I didnt have a chalice or the like with me at the time.Im not sure what to expect with this beer.

Light red body with a small white head and not much carbonation bubbles.Head leaves a small white ring.Vanilla,oak?,candi sugar and some berry mabey.and some phenols in my nose.Hard liquor taste,like whiskey.candi sugar,spice and vanilla.Warming sensatio in my chest,fizzy carbonation and a bit creamy from the vanilla I think.One 12 ounce bottle is enough for me.The first sips were a bit out of the ordinary for me.Its not half bad at all.I like it and would recommend it but now to a new craft beer drinkiner or the faint of heart.This brew is also hot, I have one in my cellar and I think a year there will do some good.The oak taste is tasty but overwhelming all in the same.The drinkability would be higher but I started to feel a small buzz off a few sips.Deffinetly SIP THIS!

Thanks @jzeilinger for this monster. Poured into my giant Duvel tulip glass bottled on 2/23/16. Poured slowly down the center at close to room temperature and got a massive 3 finger white head that settles quickly into a thin layer of bubbles and leaves behind no lace to speak of, the beer itself is a beautiful ruby red.

Taste just grabs a hold of you immediately starts with vanilla, oak, clove, banana bread, brown sugar, toffee, caramel, dark fruit, and slaps you in the face with bourbon and really gets your attention.

Overall this is the finest Quad I have ever had, but if you don't appreciate a BA aged beer then you have no business attempting this monster!

A: Poured into a snifter to a deep brown topped by a finger of dense light tan head that fades quickly to a collar around the edge of the glass with minimal lacing
S: Smells of dark fruits, caramel, vanilla, oak and spicy alcohol
T: Taste is dark fruits and alcohol soaked cherries, with some caramel and toffee, spicy yeast, caramel, vanilla and oak. This beer is big and complex in the mouth. Swallow is more alcohol soaked cherries, dark fruits, caramel, spice and oak with some lingering vanilla.
M: This beer is big and smooth on the palate with soft but adequate carbonation. This beer has a dry finish from the ABV.
O: Overall this beer rocks the house. Great flavors and complexity that are complemented well by the time in the barrel. I like this one better than BBQ from Boulevard. I definitely need to get more of this.

A- Where I have seen bottle conditioned beers with lees that cake nicely to the bottom, this particular bottle had considerable sediment that was very easy to rouse. That said, a careful pour produced a mostly clear (with a few floaties), deep ruby color with a minimal, white, soapy head. (4.5)

S- Equally intense and complex. Brown sugary malts and a medley of Bourbon-soaked fruits: Cherry, Plum, Banana, Plum, Raisin and hints of Chocolate and Vanilla. Absolutely no alcohol is found in the nose. (5.0)

T- A blast of tart cherry and Granny Smith apple attack first, followed by brown sugar and dark fruit sweetness. Later, some oak tannin, bourbon and alcohol rise from seemingly out-of-nowhere, pushing the tart and sweet aside to dry things out. (5.0)

M- The bottle conditioning produces a pronounced (bordering on prickly) carbonation that masks an otherwise viscous beer in medium-bodied armor. Couple that with the immense flavor explosion on the palate and I find myself grabbing the glass with increased frequency. I have consumed less brazen beers that had much lower drinkability. (4.75)

O- This is another massive and massively enjoyable offering from Weyerbacher. The more I contemplate, if a Manhattan and a Belgian Dark Ale produced offspring, Blasphemy would be the result. Weyerbacher knows big beers and their barrel-aging program is sadly overlooked with Blasphemy topping the list. What's more, the value for a beer of this magnitude is ~$8/bottle and cannot think of a better BBA beer for that value. Now, if they Barrel-Aged Tiny and Merry Monks as well, I just may not seek out another brewery. (5.0)

Burnt sugar, brown sugar, molasses, some alcohol, sweet and chewy. This is about on par with the best barrel aged Quads, even Firestone Walker Stickee Monkee.

Pours a garnet color, slightly opaque, with not much head or cling. Might have poured it too cold. Smells pretty good- malt, dates, figs, raisins, some cherry, some plum. Light bourbon and vanilla, a slight sherry aroma. Taste leads with the malt, much more bourbon than the nose, figs, cherries, vanilla, dates, raisins, some oak, a little anise when warm. Really smooth, lighter body for the style, but still full bodied, appropriate level of carbonation.

Great flavor, well blended, the right amount of the barrel. Have only had a few beers from these guys, but they've all been above average. This one is well worth a purchase.

750 cork and cage bomber
Poured very pretty into a goblet two or three fingers of creamy head, chidingopper cloudy color. Smells strongly of hot alcohol with molasses and fruity.
Tastes very strong booze taste, caramel, lot of heat and very sweet. Describe as whisky candy.
Mouth feel is quite carbonated leaves lips sticky with a medium body.
Over all the price is cheap 8$ lot of alcohol not my cup of brew, the booziness is overpowering hiding the quality of the beer also felt there was too much residualsweetness.

A- Pours a murky brown body with some orange hues and one finger of off-white head that goes away pretty quickly.

S- Sweet and sour fruitiness. Figs and raisins. Boozy bourbon; maybe just a little too much

T- If you think the nose is boozy, the taste is even more so. The sweetness helps it out, but it doesn't appear to be overly complex or anything out of the ordinary.

O- I know this beer is almost 12% ABV, but the alcohol isn't hidden too well. This is the only thing preventing this beer from being really good.

Beautiful pour. Fluffy thick head that holds well. Unique quad smell of oats and bourbon aging. Taste is smooth and clean, not overwhelmingly alcoholic. An amazing beer that I highly recommend. If you come across Blasphemy, grab it before it goes!!

Thanks to Joey R. This came from the first bottling of this brew.

A: Pours a nice light bright amber red hue with a nice bubbly head. Good retention and some lace noted.

S: Tons of bourbon to start. Lots of booze, oak and vanilla. Beneath the barrel lies some dark fruit and molasses.

T: Flavor is big on the bourbon. Tons of booze and oak up front. The dark fruit does come thru as does caramelized brown sugar. Lots more bourbon burn in the finish with a touch of the vanilla showing thru.

D: To be sipped slowly.

A - Dark copper Brown, like a well aged penny Brown. Cloudy, with little to no head

M - smooth, rich, slightly boozy. Different from any quad I have tried, but I love it.

O - next spring, I will buy a dozen of these. Really outstanding, a great experience, highly recommended.

Pours a very nice reddish brown with minimal head. The smell is raisiny with sugar underneath. The mouth is amazing. Tiny soft carbonation like caramel cotton candy. The taste is rich - bourbon soaked dark fruits, burnt sugars. Lots of alcohol notes and a bite at the end. A great beer to hang around with for the evening. This is one I will get any time I see it.

Pours a light brown/caramel color with some amber and deep copper hues. Virtually no head develops, save for a very thin ring of off-white bubbles barely surrounding the surface of the liquid; no retention or lacing, and the ABV is the only reason this one didn’t get scored lower here (I mean, at ~12% I can’t be too picky, can I?).

The aroma is lighter than anticipated for a quad as well, with date, raisin, plum, some black cherry, cane sugar, light caramel, and toasted malt coming off first. A bit of ethanol pulls through as well, but it’s quite subtle and seems to lend a faint “buttered popcorn” aroma as well (theater-only style).

Taste is, again, lighter than expected for the style. Perhaps this blends a bit with the mouthfeel, but it just seems thin and lacking in the usual unfermented sugar and flavor goodness that more traditional quads boast. Flavor-wise, elements of caramel, toffee, roasted almond, date, plum, raisin, cane sugar, wood (oak and cedar, primarily), and prominent EtOH are the mark of this brew. Much more alcohol on the tongue than in the nose, unfortunately.

Mouthfeel, as alluded, is thin and almost worthy of the descriptor “watery.” The sugary flavors are felt as an almost gritty but certainly dry finish, the alcohol and it’s accompanying burn contributing to the latter.

Overall, this was a “meh” beer for me, seemingly average for the style; I've had worse and better. With almost a year on it, I had hoped the EtOH would have died down a bit more as there seems to be a solid flavor profile lurking in the background. I just wished it had thickened up a bit and brought the intended flavors to the forefront more. Still, another new brew to me that I'm happy to have tried!

22oz bomber from Florian's. Tramslucent copper-brown body with under a half inch of off-white head. Banana and woodiness dominate the aroma. Wood, banana, and spice all play prominent roles in the flavor. Lighter-bodied. Little carbonation to speak of. A pretty decent beer - more mellow and drinkable than its non-barrel-aged cousin.

Another first timer for me from the boys @ Weyerbacher's mixed variety case. Never really got into QUAD's, after this beer, I'll be reconsidering that position.

Smell - Once you get this in a goblet, bourbon barrel effect comes through wonderfully with a buttery/ vanilla combo.

Taste - This made the brew, the buttery flavor dominated with some hints of vanilla and dark fruits was wonderful. A masterful combo of a big beer and a fine liquor.

Mouthfeel - The buttery flavor really felt wonderful on the tongue and this was a surprisingly smooth drink for 10%+ ABV, aftertaste was a wonderful savory sense and the balance made mouth happy.

Drinkability - Loved it, that simple. I'm going to have to try the non-barreled version as well, but this brew will definetly open me up to more QUAD's. The guys at Weyerbacher have another big brew winner and this bourbon barrel aging is something I'm definetly going to have to investigate as there's an RIS and Barleywine version (Yes, I'm jacked!).