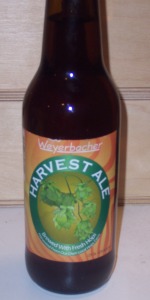 There's some hate on here for this one. I don't wanna contend with anyone else's review, but this beer is definitely worth a try. It's a little too big and rugged to be a Pale Ale, but it doesn't really contend with the more experienced (read: spoiled) beer drinker's conception of an IPA.

A - At first I get a gush of Cascades mixed with something else, then the aroma subsides. For many the aroma is probably too pedestrian to begin with. Again, everyone's owed their opinion, but Weyerbacher used only the home-grown harvest. I can't dock this beer points for being limited in its varietals. However, I do miss the aroma later on. It should be far more present... especially in a low ABV beer.

T - The hops come through better here. Beyond the Cascade blend of citrus and pine, there a lot of herbal notes. I get the sensation of Simcoe, or even some Chinook and N. Brewer. It's not offensive, but it lets you know it's there.

The malt character is rich. There's a touch of caramel to round things out, which I'm thankful for since the spicy bittering finish is very pronounced... with a low ABV IPA it has to be, or else it's just wimpy.

M - This beer drank fuller than it actually is, and the malt held up to the hops. The finish was sufficiently dry.

O - This is a very drinkable IPA. I like the approachability mingled with edgeyness. I wish it were a bit more floral and the hop varietals more interesting. It's nothing to track-down, but if you come across it, don't pass it up... in fact, go ahead and grab a couple!

The beer pours a nice dark gold/amber color with a thick frothy white head that slowly fades to lacing. The aroma is good. It has a solid malt scent of pale and Carapils malts along with a fresh hop bouquet. It's a mild hop nose, but pleasant nonetheless. The taste is good as well. It has a smooth, pale malt flavor with just a hair of Carapils for body. The hops are really tastey. I love fresh hopped beers. They're never overly hoppy, but the freshness is well recieved. The mouthfeel is fine. It is a medium bodied beer with adequate carbonation. This is a good drinker. Kudos to the folks of Weyerbacher for the freshly grown hops. They taste delicious.

Hop aroma is pretty weak. I expected way more in the aroma department. I'm actually getting a lot more malt than hops in the nose.

Thick mouthfeel. Maybe a little too thick. There's a slightly dry finish which adds a light crispness. But the body is a little too heavy for this style.

I'm a sucker for seasonals, harvest ales, etc. Some are great, some fall short. This one was somewhere in the middle.

The burnt orange colored body was clear, and the head was one to two finger thick. The aroma was very hoppy, with grassy and herbal tones typical of fresh cones. The taste was less bitter than the aroma suggested, and had a tangy sweetness which reminded me somewhat of Smarties candy (US version). The finish was earthy and herbal, and the body medium thick. This was a very refreshing beer for me.

A 12 oz bottle picked up at Al's of Hampden.

A: The harvest ale is a murky, cloudy copper color, still translucent but trying hard not to be. The ale has a rampant head, threatening to overflow out of my glass. As it is, the ale leaves a cobweb of lace around the mouth.

S: The hop aroma stands out, with a fresh vegetal hop smell adding a leafy presence. Caramel malts hang around too.

T: The leafiness of the hops is gone, replaced by a citrusy body. The hops seem bigger at time, fuller with a flavor that lacks the unique twist that fresh hops provide. Caramel and pale malts, toasted bread, are a good fit with the hops. The IPA packs a nice hoppy punch but it never seems like a freshly hopped one.

M: The mouthfeel is hop-centric, improving slightly over time. Generally, though, it is smooth with a soft finish that takes the edge off of the thick hops.

D: I don't really get this harvest ale, too bad because I like most other Weyerbacher brews.

Bottle pours a clear amber body with a tall almond hued head that hangs around for awhile. Enormous sticky lacing.

Aroma is citrusy and grassy hops, with an assertive toasty caramel malt underpinning.

Medium body and carbonation is accented by an earthy and oily hops presence.

A solid American IPA, certainly one of the more bitter ones.

Out-of-focus apricot with bright tangerine borders. A fairly standard pour produced a thick chunk of buff colored foam that has quite a bit of character as it shrinks. Abstract patterns of sea foam lace look good as well... and are impressively extensive in the end.

The aroma has almost certainly lost some of its fresh hop mojo in the 3+ months since the release. This is still an enjoyable sniffer that features musky-citrusy Cascade hops and a generous amount of toasted bread-like maltiness.

Harvest Ale still has a lot going for it and is still worth a purchase for any craft beer lover looking to get an alpha acid fix. What I presume was a sunshine bright, lupulin-drenched hoppiness initially has faded to some extent, but there's still lots of flavor and plenty of biting bitterness.

The malt bill includes pale, Munich, crystal and wheat. The end result (toasted, caramel-like and slightly nutty) makes a fine canvas for the sharper, more well-defined brushstrokes of the hops. The grapefruit citrusiness of Cascade is front and center, as is that dank, ganja-like quality that that hop is known for.

Despite being a few barley kernals short of the style average, the mouthfeel is all kinds of enjoyable. It's supremely smooth, is lightly creamy, and makes drinking quickly as easy as falling off a log. The bubbles are both soft and energetic, which is a great combination.

There is no doubt in my mind that Harvest Ale would have earned the next highest flavor score back in September. There's still a great deal here for hopheads to love, but I would suggest drinking any bottles in your possession before too much longer. Weyerbacher continues to impress.

12oz bottle purchased as a single at Julio's, Westboro, MA.

Poured into an imperial pint glass, formed a 1/4" beige head over the slightly cludy orangey amber brew. Head holds on ok, with average lacing. Aroma is citrusy and earthy hops. Taste is sweet upfront, tangerine in the middle, with an earthy hops close and moderate bitterness. Mouthfeel is smooth, and drinkability is pretty good.

An excellent blend of pale and crystal malts with a notable floral hop bouquet--very inviting.

Nice malt start which is quickly covered with a biting hop bitterness, like a true IPA. The aftertaste is different in that it starts with a crystal malt (British Bitter flavor) sweetness at the swallow. The remainder of the aftertaste is sharp, bittering hop. Very complex. Great body--similar to whole milk with an average level of carbonation. This is a special beer--I'm placing it in my top IPA's.

Appearance: Pours a slightly hazy amber color with a rocky, three-finger head that leaves a few dots and dashes on the sides of the pint glass

Smell: Malt forward, with a nutty, graham cracker character and some pithy hops as well

Taste: Opens with a graham cracker malt flavor that is joined, mid-palate, by the pithy, leafy hops; after the swallow, the bitter hops continue to complement the malty flavors but this is more in the balanced category than a hop bomb

Drinkability: Though I should have consumed this one fresh, it is still very quaffable

Poured bottle(s) into a 20oz. glass

A: Dark orange color with a two finger cake batter colored head and moderate carbonation on the pour. Very nice lacing is developing around the rim of my glass.

S: Fresh grassy hop smell with some rich malty flavors and a hint of fruity sweetness as well. You have to love that fresh hop smell. Not overpowered by the hop aroma but they are fresh!

M: Moderate carbonation, and a dry bitter back end to the swallow. Nice fruity hop presence.

D: Nice fresh hop beer that can be offered as a nice session drinking beer for the fall months. I like it!