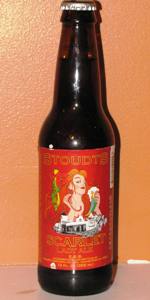 Notes: This English-style ale is brewed with Marris Otter and Caramel malts for a rich, reddish-copper color and smooth malty palate. The use of bittering and aroma addition hops balances the regal, sweet maltiness and imparts a softly perfumed aroma.
View: Beers | Place Reviews
Reviews: 376 | Ratings: 679 | Log in to view all ratings and sort
Reviews by PMG:

Taste is definitely on the bitter side. Fruity sourness fighting against toasty malts, with mild pine from the hops standing strong. Flavors die out pretty quick after the sip, leaving a dryness. Feels really good while in the mouth, slightly creamy with some effervescent activity (which I never would've predicted by looking at it).

A good-but-not-great beer. I know Stoudt's brews better beers. This is an interesting and enjoyable ESB, but it's not an award-winner.

This is a very easy drinking beer with little "Extra Special" about it.

Appearance: This beer pours an attractive scarlet/copper color with a decent off white head that leave a frothy cap after it fades. Medium lacing.

Taste: This is a worthy stab at the style but quite average IMO. The sweet malt character is pleasant. It is a bit of toasted malts and caramel. It has a sharp sweet feel and need maybe a bigger hop balance. There is a subtle bitterness that comes in to play, but even the aftertaste which becomes dry has remnants of caramel lingering around.

Mouthfeel: Medium body. Decent amount of carbonation but the fell was quite malty and almost sticky.

Drinkability: I found this to be a very easy beer to put back but just as easy to forget about. Tasty and worth sampling but it had little fireworks of glamour to me.

dark amber with a one finger head that doesnt leave a whole lot of lacing. The smell is very sweet caramel and grain. The taste is the same with a hop bitterness. decent mouthfeel and drinkablilty. A pretty standard ESB, not amazing but still pretty solid and easy drinking. Wouldnt buy this regularly but from time to time when im in the mood I would.

Thanks goes out to jwc215 for this one.

Pours a nice golden amber color, nice carbonation, nice little creamy off-white head, which leaves some nice sticky lacing. The nose is malty, very slightly spiced, and caramel. The taste is too watery for me, malty, with some caramel. Light body. Almost drinkable, this is a disappointment to me since I've had better brew's from Stoudts.

Pours a shiney copper, very clear body under a pretty fizzy weak head that fades and leaves occasional evidence behind.

Hops are present in the nose but tend to wafe around and don't stick in the taste too much. Sweetness is on the candy side of things. Roasted malts are ever present, little bit of acidity seems to come with the charred/roasted effect. Overall Pretty smooth mouthfeel and easily consumed without much effort. Bitter in the finish is welcomed and well put together.

Another solid offering, pretty average in the style, well balanced leaning towards bitter in the end. I'm in.

A - pours a deep reddish tinted amber with a very nice off white head about a fvinger and a half high.

S - Smell of sweet malts with some toasted malt aroma in there as well. A bit of a floral hop along with tiny citrus notes. Nice tea like aroma is the smell jumping out at my most.

T - A big toasted malt profile. Some hop notes are present but not as much as I expetced from the smell. Still it finishes veery clean with some hop bitterness.

M - The roasted taste combines with a medium body/carbonation make this one feel pretty good in the mouth.

D - A pretty good session beer but not drinkable in the sense that it's unique and exciting. Still pretty good drinkability.

Nose is fruity, hints of apricot, maybe? Definitely lemon rind. Sweet malts coming through. Tastes bitter, but not overly so- underly so, actually. Hints of roastedness and breadyness. Also mildly fruity, mostly citrus. Maltyness and hoppyness are fighting to be number one on the palate- feels like they're both drowning in the struggle. Tasty, but there's something about it that's just not right... not balanced enough. That's pretty annoying because I sense that it COULD be really, really tasty... it's growing on me, though.

Mouthfeel is really lovely- medium-bodied and smooth, creamy, lightly bubbly. Quite drinkable, grows on you, just wish they could tweak the flavors a bit.

A: Pours with a 1 finger head, small and off white as the head on most ESB's tend to be. Sudsy and quickly diminishing with a film remaining until the end. Absolutely no lacing. The color of the body is a clear copper orange mixed with amber, medium saturation.

T: Light alcohol detected despite the low ABV. Flavors of plum, prune, toffee & butterscotch come to mind, along with light diacetyl. The Scarlet Lady has a respectable amount of flavor, especially considering the mere 5% ABV, but still shy of impressive. Flavor retention is above average as well. Moderately sweet (as in opposite of dry), slightly sour, and bitterness is next to none.

M: The mouthfeel is in need of improvement. Light body with a slick texture that borders on being thin. Average carbonation.

D: Drinkability is good. Would not mind revisiting this brew again (especially on cask or) when a long period of imbibement is anticipated.

The appearance is a brownish copper color with a fleeting tan head. Some lacing does occur.

Its smell is hopy and bitter.

The flavor has a brown sugar quality. It starts off sweet and finishes with a hop kick.

The carbonation is good for an ESB, and is light in the body department.

This is an easy drinking beer. I could definitely drink this one again, but dont feel that I will be purchasing it again.

There is a nice rich malt aroma and some ceral grains.

Balanced taste is well done here in this instance with a light earthy hop taste and mildly sweet malts.
Taste is sutle.

A quite nice medium mouthfee with a slighty dry finish and bitter aftertaste.