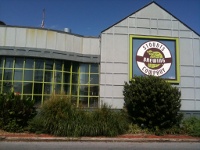 Just like years past, my local chapter of the SBCA held their 2011 fall meeting at the Black Angus last night (pub section of Stoudts Brewery).

The décor will take you back in time - by centuries. The bar was along a wall parallel to the front with about a dozen bar stools lined up. They also offered cocktails - not just their microbrews. The remainder of the restaurant was made up of various seating arrangements consisting of booths and tables. There was also a closed off section where private meetings can be held (that's where our meeting was).

I ended up having the 2011 Winter Ale which is a hoppy amber ale this year. I also tried the Fat Dog Stout and their Brewer's Reserve - Vanilla Almond Porter (very nice and not artificial tasting). I also had my usual Double IPA. The beers were all phenomenal.

Food wasn't bad either. Started out with bread and salad - then had the NY sirloin with some steamed vegetables and a baked potato. The steak was a little tough in the middle, but was very flavorful and cooked exactly how I ordered it.

Dessert was their Black Forest cake which is a chocolate layer cake with some sort of cherry parfait in the middle and light airy chocolate icing on the outside. Coupled with a black coffee - it made for an extremely decadent finish to a excellent meal.

Service was super fast and the staff seemed to know their beer. Every time I've stopped in over the years, there was always the same familiar bartender and servers. I guess that should say something about just how good the management is.

I would recommend Stoudts to anyone who enjoys high-class cuisine and some great tasting brews. I ended up leaving with a 6 pack of their Double IPA ($12.50). It’s so extremely balanced and drinkable despite the higher ABV (similar to Oskar Blues Gubna). Plus they don't offer growlers - but the bar tender did said they will fill one if you bring it in (doesn't apply to seasonals of course).

One of the first craft places in PA., big place, a nice dining room a bit too formal for me, the beer is okay for craft selections, and the food was average, the last time there the girlfriend got sick from her meal. A bit outdated in today's craft scene.

Beers were so/so. Waitress was a wackadoo. Taproom is in a bizarre restaraunt like a time warp to 1985. Everyone stared at my wife and I like we were aliens and no idea why. Felt like the 2 Americans walking into that pub from “An American Werewold In London”. Was waiting for someone to tell me to “keep off the Moors”. Old 1900 nudie girls on the bathroom walls. Just a creepy place.

Decided to stop in on the way to Philly to see what kind of special offerings they had. I hadn't been to Stoudts in a very long time, 10 plus years it seems. Then I really enjoyed it. However, upon returning, I found that the facility looks really run down and unkept. Wayfinding was poor and when I found the retail "store", its was very small and had a poor selection of items for sale. Then came the beer. I went into the office to ask about a purchase regarding their barrels aged ales and was treated rudely as if I was already expected to be a beer expert and the other staff was not very knowledgeable. If I want to be treated rudely, I will just go to Al's of Hampden, its closer.

We come to Stoudt’s about twice a year for my filet and Fat Dog fix. Parking is more than adequate on both sides of the building. When you enter through the front door, you are greeted in the lobby by an old restored Packard. Seating is available in the bar, the dining room, or a smaller room (pub) off the bar. The small room has a collection of beer bottles and some steins on display. 4-packs, six packs, and bombers are available for sale in the bar. Additional items (signs, shirts, hats, signs) are displayed in the lobby and can be purchased in the bar. The bar itself is small and busy, but the bartender(s) are good and there is only one TV to bother conversations. Selection is good with the year around and a few seasonal and one-offs usually on tap. Be sure to check out the 19th century porn in the bar rest rooms!
The dining room wait staff leave something to be desired, such as efficiency and promptness. The food is excellent but not cheap – the bread is made from the brewery’s spent grain and is available for sale in the mornings when the store is open.
Ed used to give tours of the brewery but I don’t know if that option is still available. Check the website but don’t depend on it – it’s not well updated.

Edit - 3/24/18. Ed sold the Packard. The wait staff has improved (Ask for John) and now they serve all brews in 16 oz shakers rather than using those 8 oz snifters for the higher alcohol beers.