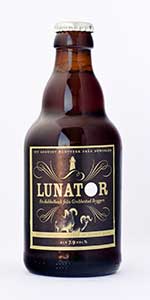 Notes: Brewed during the first full moon night of the year. Then it is slowly matured for some months before the release, which is a sign of spring.
View: More Beers
Recent ratings and reviews. | Log in to view more ratings + sorting options.
Rated: 3.6 by Silke_Neryn from Sweden

Reviewed by craftbeersweden from Sweden

The beer pours dark mahogny colored, a little hazy, with a small, beige head that leaves lacing on the glass.

T: Very pleasant fruit is actually the main tone, with strawberry and raspberry fruit ester hops abound over top an unfortunately weak barley foundation which can't quite support the hops. A slight watery note is generated as a result. No alcohol comes through. Some caramelized malt makes its entrance somewhere after the midpoint but leaves before the climax. The amber hops are craftily restrained to let the esters shine - a decision I like. It's imbalanced but overall pretty decently built for the style. Maybe best describes as a partially failed experiment.

Mf: Too smooth and wet. Watery even, but not creamy. The water is ruinous. It doesn't support the flavour of the beer at all.

Dr: Very drinkable for the ABV - which you don't notice, but suffering from imbalance mainly due to its unwelcome watery tone. That said, the flavours that are present are quite delightful. I'd love to try this beer after they sort the balance out.

Reviewed by cobrarax from Sweden

T: Hard swedish bread, strangely burned. Bitterness without any hop aroma. Some tones of whisky. Rather alcoholic and with a most unpleasant taste of soap. Quite dry.

M: The whisky alcohol taste and the soap makes it hard to drink. The liquid is thin with small bubbles.

O: This bottle must be faulty. Otherwise I don't understand the hype.

Reviewed by Rapax from Sweden

Smell is malty, with hints of orange marmalade and maybe a plum or two. Some vegetable notes too.

Taste is malty for sure. Butterscotch comes too mind. Some earthy flavors. Esters are restrained but very nice, I get hints of dried fruits of every variety. And then the marmalade again.

A strong body that is not ashamed to be a doppelbock. Low carbonation that feels just right.

Good body and nice malty and fruity flavors but it doesn't push the envelope as a doppelbock is supposed to.

Very sweet, but with good stamina, salt and spicy food is a good complement.

S: Sweet malt with dark dried fruits. A hint of red wine in it ass well.

T: Sweet malt that gives a nice taste of dark dried fruits. Bitter hops and some floral ones as well. Ripe cherries are also in this well-balanced doppelbock.

M: The body is full and the carbonation is medium. A really long aftertaste with a very nice balance between sweetness and bitterness.

D: A really nice doppelbock. I'm gonna buy 10-15 of them next time they're available (for cellaring).

Reviewed by dqrull from Sweden

Smells great of dark fruits, figs, raisins and some roasted malts and bread, almost a bit of the same kind of smell you'd get from a cellared english barley wine, great .

Taste is great with initial malty sweetness hitting your palate in a deceivingly light way, and it gives way to buttery ripe dark fruits backed u p by a slight hint of roasted malts, a bit of a watery finish though, lacking some bitterness in my opinion.

Reviewed by Traquairlover from Virginia

A = Clear caramel color pours with a yellowish two finger head which dissipates medium quickly into a thin layer of foam over entire surface.

T = Lots of caramel, good balancing bitterness, lots going on in this beer, raisins, I get some sharp wild flavors too but mostly only hints of them, blue cheeses and such while all the while a strong caramel and toffee flavor predominates. Pretty decent and unlike any other doppelbock I've had.

M = Medium bodied, good mouthcoating, enough carbonation to tickle the tongue but not overly intrusive past that.

D = This is a good beer but it does get just a little cloying after about half the bottle.

Reviewed by simonjohansson from Sweden

Reviewed by baggio from Sweden

A: Ruby red with a small head.

M: Very sweet and quite thick. The carbonation makes the liquid stik to the tongue.

This is exactly how i want a good doppelbock to taste. Very sweet and well crafted brew from Grebbestad! Recommended!

Reviewed by Bananaman from Sweden

Pours a deep red color with a nice big beigish head, though it after a while decreases to a nice foam ring in the glass.

Smells nicely of malts, sweetness and a slight tone of dried druits, good!

Reviewed by Ljunkan from Sweden

The smell got some nice notes of strong wine, sweet malt and toffee. Maybe some dried fruits/raisins there too.

Mouthfeel is pretty average, not as full as I hoped for but still pretty decent. A bit thin. Update: I tried it again and the mouthfeel was a bit better. Nice.

Drinkability is quite high. Goes down pretty easy, despite the 7,9%.

Overall a very nice sipper. I gave this 4.0 in September but this is even better than that! An amazing doppelbock, and overall one of the best Swedes all categories!

Reviewed by Crosling from Colorado

The colour is deep wine red with a hint of brown. The two finger head is off white, it sinks to an uneven thick lid, leaving lots of fine lacing.

The smell is fruity with lots of matured notes of strong red wine, raisins, marzipan, plums and peaches.

The carbonation is mild to medium. The small bubbles keep the smooth and creamy liquid a fresh experience.

Overall, I found this beer luxurious and very well crafted. Among beer enthusiasts in the Swedish West Coast, it is respected and honoured. It is not hard to se why

Reviewed by johnnieoz from Hawaii

I also feel the need to howl a shout out to Bohuslaen, the province where this beer is brewed. The label tells the tale of how the brewer Robert Bush mixes his goodies during the first full moon of the year so that it's ready to be tapped for spring - or in this case, winter...it was just released - consumption.

A: A beautiful pour with a huge, thick tan head. It glistens like a ruby when held up to the light, and later on shades of brown shine through. Plenty of lacing 30 minutes in.

S: The least appealing part I'm afraid. It's just too sweet and smells like raspberry with a hint of caramel. Not what I expect from a doppelbock.

T: Now we're talking. Hello doppelbock. Just a tad sweeter than, say, a Salvator. It is malty and bready but in a discrete way. A touch of hoppiness (Perle, Hersbruck and Mittelfruh) offsets this making it quite the balanced beer.

M: Oily and wonderful. But halfway through the bottle it seems a little watery, simply less filling.

Drinkability: One of these will usually do ya. And so it is in this case. But there's no mistaking that this is a very solid doppelbock. Kudos to the brewmaster and his crew! Go Grebbestad!

Reviewed by rastaman from England